A split is deepening between Labour leadership contenders over whether the party's capital gains tax policy should stay or go. 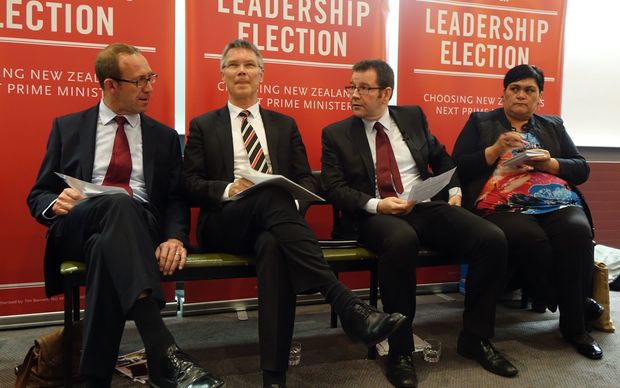 About 300 party and affiliated union members gave up a sunny afternoon yesterday to pack into the Mahatma Ghandi centre in central Auckland to listen to and vote for either Andrew Little, Nanaia Mahuta, David Parker or Grant Robertson.

Mr Little told those gathered that in his view Labour had been producing too much policy.

"But there are a couple of policies at least that I know for a fact have caused people not only to not vote for us, but to turn off us completely and to stop listening to us," he said, citing lifting the age of eligibility for superannuation and the capital gains tax.

"Now we've made the policies and the party has agreed with them and supported them and so have I, but the conclusion I have come to now is that those two policies alone are enough to stop people even considering what we have to say anymore."

"The CGT is more popular than we are by far. If the capital gains tax is not the answer, then what is? Because we need pro-growth tax reform to get the fair society that I want, and to pay for our promises," said Mr Parker.

Mr Robertson also supports the tax but did not address it in his speech. Instead he focused on his broader vision for Labour, saying the party needed to be courageous and be clear and authentic about its values.

Ms Mahuta said the public did not support a capital gains tax at the moment and during the election campaign the messaging was too complex.

She said Labour must get its house in order before the next election so it could sell its policies clearly.

The four contenders have another meeting tonight in west Auckland and the final one in south Auckland on Wednesday night.

The new Labour leader will be announced on 18 November.