MPs were officially sworn in at Parliament today and a Speaker of the House was also elected. 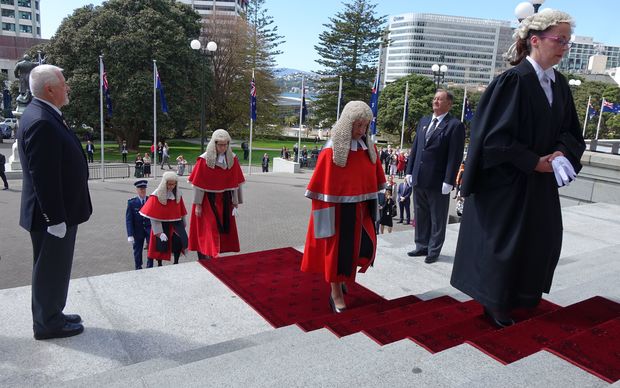 The opening of the 51st Parliament. Photo: RNZ / Chris Bramwell

Today's ceremony marks the first meeting of the 51st Parliament, before the state opening tomorrow.

This morning's ceremony began when the Royal Commissioners - the top judges of the country's three highest courts -were led in by the Sheriff of the High Court for the commission opening of Parliament.

National Party MP David Carter was again elected as Speaker of the House. A personal vote was taken in Parliament after New Zealand First leader Winston Peters nominated his MP Ron Mark for the job as well.

During his speech, Prime Minister John Key joked there was less competition to become Speaker than there was to become leader of the Labour Party.

Labour's acting deputy leader, Annette King, said not having a leadership team in place was not how the party would have liked to have started the new parliamentary term but it is what it is".

"We have a leadership competition. It'll be all over by the 18th of November and we'll go back into the Parliament for the last two-and-a-half weeks with a new leader and a new deputy, and we'll be fighting fit after Christmas to take on the Government," she said.

But Dr Norman told Parliament that ruling had faded under Mr Carter's time as Speaker.

"I would ask you to reconsider that ruling.

"I think the ruling by Dr Smith, that straight questions deserve straight answers, made a big difference to this House."

Tomorrow's state opening will feature all the pomp and ceremony associated with a Westminster-style opening, with a royal salute, a flypast and an artillery salute.

The Speech from the Throne to be given tomorrow will set out the Government's legislative agenda for the coming term.

Mr Borrows, who was Minister of Courts last term, missed out on a ministerial posting when the Prime Minister unveiled his Cabinet line-up two weeks ago.

Long-serving Labour MP Trevor Mallard, who has a reputation for being booted from Parliament, was elected as assistant speaker, alongside National's Lindsay Tisch.