Prime Minister John Key says it's probably an oversight former Justice Minister Judith Collins wasn't told she has not been given the title 'Honourable' that most former ministers have. 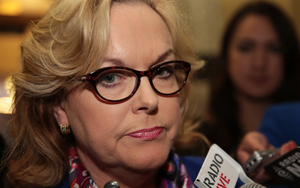 Judith Collins was told by media of the change. Photo: RNZ / Diego Opatowski

Ms Collins has been left off the list of former ministers who hold the honorific.

She is reported to be seething about the matter, as she was informed about it by the media.

John Key says because Ms Collins is the subject of a Government inquiry, no decision has yet been made on whether she will be allowed to use the title.

"Probably an oversight that my office didn't talk her through the process. We shouldn't just assume people understand the process - but there's nothing unusual about it."

Ms Collins is being investigated over whether she was involved in undermining former Serious Fraud Office chief executive Adam Feeley.