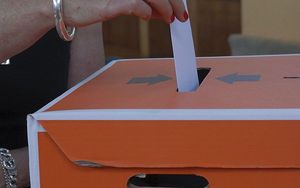 National is on 44.5 percent, down two points on the last poll last week.

Labour is also down, half a point to 25.6 percent.

The poll has the Greens on 14.4 percent, up a point, and New Zealand First on 7.1 percent, up two points.

The Conservative Party is on 4.9 percent, just below the five percent threshold needed to get into Parliament.

On these figures, New Zealand First would be likely to hold the balance of power.

The party's leader, Winston Peters, is also recording growing personal popularity, with 9.1 percent preferring to see him as Prime Minister.

The TV3 poll was completed before the Moment of Truth meeting organised by Kim Dotcom on Monday night.