A campaign highlighting child poverty in the lead up to the general election says the size of a protest in Auckland shows the public wants solid political action.

About 1000 people marched up Queen Street yesterday calling for the Government to do more urgently to eliminate child poverty.

The hikoi was part of the Tick 4 Kids election campaign which is made up of almost 36 organisations including Plunket, the PPTA and the Public Health Association.

Tick 4 Kids is designed to encourage voters to keep children in mind come election time, and it's also encouraging political parties to have policies for children.

Deborah Morris-Travers from Unicef is the campaign spokesperson. She said there were early signs of how big the hikoi would be.

"I had been watching the discussions on social media in the lead-up to the event and it became very clear that we had a very high level of interest in it.

"We saw on Facebook that we had more than 700 people saying they were going to come, so to have a thousand is really great."

The marchers waved placards and carried balloons as they made their way to Aotea Square.

Ms Morris-Travers said there needs to be a much more comprehensive approach from the government.

"We still have a number of people in government who think that we can leave this issue up to the economy and the market. We can't just rely on economic wealth to solve this problem, we need to have a redistribution of wealth." 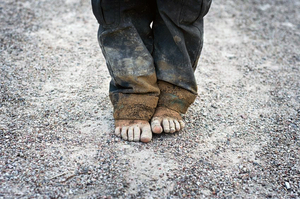 She said housing needs to be warm, of good quality and affordable.

"We would be encouraging the newly elected government whoever it is to be much more aspirational around this issue, to really keep the focus on children, and especially the youngest children who are those most likely to be in poverty."

The Anglican Church is calling on the government to give beneficiaries the same tax breaks it gives working families to help lift people out of poverty.

More than 200 clergy and lay people met at Waitangi this week for the Auckland Diocesan Synod.

The Bishop said the Church is all for job creation and seeing people in work, but he said the families of those who can't find work are disadvantaged through no fault of their own, and forced deeper into the poverty trap.

Political reaction to the hikoi

Mana leader Hone Harawira was at the march and said it was disappointing that hundreds of people had to stage a hikoi in a country as wealthy as New Zealand.

He said ending child poverty should be a matter of course, and the National-led government and all other MPs have not done enough.

"All of us as politicians have to decide what's the most important thing... Is it securing a seat on the United Nations Security Council, is it the America's Cup, or is it the fact that we've got 260,000 children in this country living below the poverty line?"

Prime Minister John Key said on Saturday that National was committed to lifting children out of poverty and had worked hard to build a strong economy.

"This is an election campaign and you'll always get people advocating, making noise and strongly wanting to get their message in front of New Zealanders. That's to be both expected and respected. I've no issues with that and I'm confident that my Government's done everything it practically can."