Opinion - It's a pretty grand conspiracy that MMA fighters Israel Adesanya and Dan Hooker are alleging. 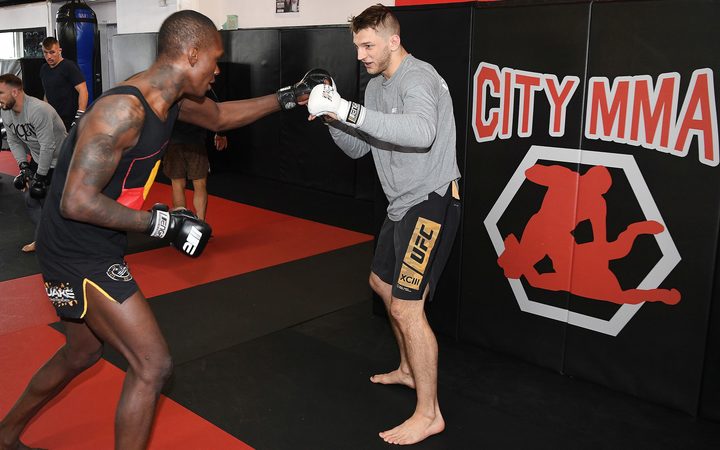 We're almost all in on it, apparently.

Yep, from Sport New Zealand to politicians, bureaucrats and media "big wigs" everyone's intent on thwarting the professional aspirations of the popular pair.

I say popular, because MMA is big and these guys are elite exponents.

They talk well and fight well and have often represented New Zealand quite well too. Not in the sense of representing a national team, but in terms of being decent ambassadors for the country.

I also used the word professional before.

Many Kiwi professionals ply their trade abroad. Be they butchers, bakers or candlestick makers, they are part of the great New Zealand diaspora.

Would many of them like to come home? Probably. Particularly those who would be able to bring their work with them. Many can't, however, and there's the rub.

To make a living in their chosen profession, many New Zealanders need to work overseas.

Maybe there isn't a market for their expertise here or perhaps there's limited recognition or appreciation for their skills. Maybe, as has always been the case for certain athletes, their sport doesn't exist on a fully professional basis here.

You assume there have been times when people such as car racer Scott Dixon or golfer Lydia Ko or basketballer Steven Adams dreamed of competing from the comfort of home, but that's simply not realistic.

Others, such as Ryan Fox, have tried to commute to and from over the years. To play, in Fox's case, golf professionally in Europe and Africa and Australia and occasionally the United States and also be based in New Zealand for parts of the year.

That's not possible now so, as Fox has done, you either sit things out back here or prepare yourself for an elongated spell overseas.

That sort of arrangement doesn't appear to suit Adesanya and Hooker. Their work might be overseas, but they'd like to come and go as they please.

They see teams such as the Black Caps doing a bit of toing and froing and believe cricket to be an elitist sport - which has the powers that be in its pocket - allowing players to take up MIQ spots with impunity. Never mind that we're talking about a national team here, rather than a private citizen seeking to commute for work.

Now I'm a sports writer. I sometimes stray off topic, but not a great deal.

Because of that, I won't pretend to understand all the MIQ protocols. I obviously wonder why facilities are about to be made available to the Netherlands cricket side, but more from a sporting perspective than a political or social one.

I also understand that hyperbole is common in MMA and UFC circles. Or is that Octagons, in this case?

Either way, fighters talk a big game in an effort to generate interest in themselves and their endeavours.

Adesanya, for instance, believes race is a factor in his inability to come and go to his heart's content. Along with the fact his sport is maybe slightly distasteful to some.

Hooker chimed in by suggesting various establishment types in this country were colluding to make life difficult for UFC fighters. There were some allusions to tall poppy syndrome in there too.

It's hard to put yourself in the position of a perceived tall poppy. But what I have noticed over the years is that those who do regard themselves that way seem to think media companies intentionally chop them down.

That, within our own organisations and more broadly as an industry, we decide when a person has to be taken down a peg or two.

It's as if these tall poppies imagine we chart their lives on a white board, for instance, and the moment two lines on a graph intersect or the level of the person's fame or success exceeds a certain threshold, then the campaign to tear them down begins.

Not only do we apparently decide as a website or newspaper or broadcaster that this tall poppy is in for the chop, we organise rival companies to do the same.

In the cases of Adesanya and Hooker, they're now too big for little old New Zealand. Too successful, too talkative and - in Adesanya's mind at least - too Nigerian.

That's supposedly left the rest of us green with envy and eager to conspire against them.

But you can't keep good men down. Adesanya has said he won't fight here in New Zealand again and Hooker is off to the United States as well, having fired a few parting shots at those he believes would like to see the pair and their sport fail.

Actually, fellas, most people don't know you from Adam. Far from wishing you ill, they don't even know who you are. And as for this idea that various establishment forces are in cahoots to stymie MMA and the UFC, the truth is the vast majority couldn't care less.

Enjoy the United States and say hi to Dixon and Ko and Adams while you're there. Maybe have a good old whinge about the Kiwi knocking machine while you're at it.

Just don't presume that everyone back here spends as much time thinking about you, as you do yourself.