Opinion - Could a backlash to "woke politics" be the basis for the revival and return of New Zealand First? 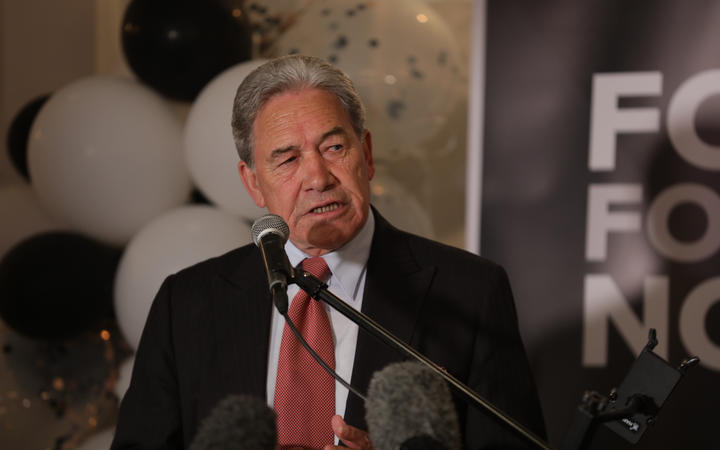 New Zealand First leader Winston Peters didn't have much to celebrate on election night in October last year, but has risen from the ashes. Photo: RNZ / Simon Rogers

The Winston Peters-led party held its first post-defeat conference in the weekend, in which the main theme was NZ First's focus on culture wars issues as a way to rebuild popular support.

Peters gave a speech taking aim at a variety of 'woke' politics and policies currently in the ascendancy under the Jacinda Ardern-led Labour government.

He took aim at the "woke elite" or "Ngati Woke", and amongst his targets were cancel culture, the Auckland cycle bridge, the He Puapua report, ditching referendas on Māori wards, the decision to buy the land at Ihumātao, increased state usage of te reo Māori and especially "Aotearoa".

On the latter he asked: "Who signed up to this plan to change New Zealand's name? Who was asked. When were you asked?". He pointed out, for example, that the recent Climate Change report, titled "Ināia tonu nei", used the word "Aotearoa" over 1300 times but "New Zealand" only 161 times.

On what he calls "racial separatism", Peters complained "Everything in 2021 is now rights-based - or indigenous-rights based - demanding co-governance". He said Labour were "enabling a wave of rights-based activism in-and-outside of government".

Tackling the recently announced rebate for electric vehicles, Peters asked: "How many working-class people, regardless of their ethnic background, are going to be able to afford your EV alternative?"

For a report on the anti-woke focus of the leader's speech, see Derek Cheng's article.

Peters and his party are focusing their critique of the current government on what political scientists call post-materialist issues - such as ethnicity, gender, personal behaviour, and free speech.

In contrast, his party intends to brand themselves as being focused on "materialist" issues, such as housing, access to healthcare, incomes, and general economic equality. Even when it comes to appealing for Māori support, Peters is pushing his credentials as focusing on and delivering materialist results, rather than post-materialist cultural issues.

For example, in talking to Waatea News, Peters has said this week: "You know what Māori want. They want decent and safe and hygienic house that they can afford. They want a decent health system for their mother or their baby or themselves... They want a decent education system... and first world wages. So which party stood for that rather than all this other woke stuff and every other project that may sound kind, but for the mass of ordinary Māori in their daily grind in struggle street, they need a voice".

Criticisms of Peters and his anti-woke agenda

Much of the media commentary has been highly negative about NZ First's targeting of woke issues in the weekend, suggesting this focus will fail to fire. Peters has been characterised as a dinosaur, out of touch with mainstream feeling.

Some accounts have been outright hostile, and have painted his politics as deplorable, in a similar way that Hillary Clinton infamously described Americans who voted for Trump as "deplorables".

The best example of this is today's column by Virginia Fallon in which Peters is characterised as "a breath of old stale air to occasionally remind us how far we've come".

The main target for her column is Peters' opposition to renaming the country "Aotearoa". Fallon argued this "is like a Rorschach test for racists".

Some commentators suggested that Peters' battle against woke politics was unlikely to yield any supporters.

Tuesday's Stuff editorial said: "There is already a crowded political market for anti-'woke' sentiment, especially when it comes to whipped-up fears of 'Māorification' in New Zealand. Act and National have been beating that particular drum for months and while it could be argued that Peters helped to perfect the politics of racial fear in New Zealand in the 1990s, when it was about Chinese immigrants, he does not have the field to himself".

Former NZ First researcher Josh Van Veen argued: "Peters will need to rise above the culture war if he is to win back those voters" he lost to the Labour Party at recent elections.

Van Veen explained Peters' approach to race relations, saying Peters' opposition to affirmative action, as expressed in his recent speech, is about preferring "fairness and equality of opportunity".

"As a Māori, it is clear that Peters has no time for 'Critical Race Theory' or the demonisation of Pākeha.

"Anyone who knows him can attest that Peters sincerely believes in Martin Luther King Junior's dream of a world where one is not judged for the colour of their skin, but by the content of their character.

"It is what most New Zealanders would understand to be anti-racism," said Van Veen.

He argued the party needed to go beyond "fire and brimstone" and project its vision in "a positive and constructive way, rather than appealing to fear and prejudice".

Can NZ First prosper with its anti-woke focus

A survey released on Sunday by Newshub suggests there is still plenty of potential support for a Winston Peters comeback.

Although this poll was reported negatively for Peters, Heather du Plessis-Allan argued differently: "He only needs five percent: he only needs a quarter of those people and he's back".

Du Plessis-Allan wrote: "I'd say Winston's got a path back" - on the basis that in 2023 there will be at least 5 percent of the electorate who want a "handbrake" applied to what the Labour government is doing, and so they might strategically vote for NZ First even if they prefer other parties.

She predicted Peters' focus on Labour's supposed racial agenda would be fruitful: "He's got a good issue to campaign on with Māori separatism. That's probably not going away this term because Labour's Māori caucus is massive and powerful and making demands, and they'll be doing that right up to the next election to make sure they don't lose seats to the Māori Party".

David Farrar also expected Peters would be back, and the anti-woke approach would work well for the party. The right wing blogger, pollster, and long-time critic of Peters said: "Sadly, I now think there is a reasonable chance he could be back in 2023. If Peters targets the culture war issues of wokeism, Treaty issues, cancel culture and climate hysteria (as opposed to rational climate policy) he could well get 5 percent of the vote".

Farrar recently used his polling company, Curia, to find out what the public think about one of Peters' key issues from the weekend - the increasing use of the term "Aotearoa" for "New Zealand". In March, his company asked 1000 people: "Do you think the name of this country should be changed from New Zealand to Aotearoa?" The results were: "15 percent in favour, 76 percent opposed and 9 percent unsure".

Such results suggest that Peters is in line with strong public opinion.

Yesterday's editorial in the Otago Daily Times agreed that an anti-woke agenda might well work to successfully elevate NZ First to Parliament.

The newspaper warned that the backlash against woke politics shouldn't be taken lightly: "The current classes ruling the public sphere should not be underestimating the depth of feelings of middle New Zealand, particularly the older generations. There is fertile ground to be tilled. People resent being told they are responsible for the 'trauma of colonialism' and that they are racists in the way the word is often used today".

The paper admitted that both National and especially ACT had already "hoovered up anti-establishment votes", but said NZ First still had a chance, because "ACT can lose its shine, National can remain in disarray".

According to veteran political journalist Richard Harman, Peters' anti-woke speech was "Peters at his populist best" and it was how he should have campaigned last year if he had wanted to stay in Parliament.

Harman suggested Peters was now freer to take such a stance, because he was no longer in coalition government. And he argued that those around Peters were now pushing him to take this more outspoken approach: "The people at the top of NZ First; those who have Winston's ear, believe that the whole issue of Māori sovereignty is creating a space for them to return to".

The Herald's Audrey Young also wrote that Peters had good reason to be confident about returning to power at the next election, agreeing with him that Covid was a big part of his party's 2020 downfall, and that there was now no shortage of issues to campaign on, including many anti-woke ones.

She addressed whether other parties had already sewn up anti-woke issues: "It is a crowded political market that New Zealand First will share with National and ACT but as Māori, Peters and Shane Jones have more freedom to exploit such issues without being labelled racist and, more importantly, not caring if they are".

Chris Trotter argued Peters had "extraordinary credentials" to challenge the path that the government was apparently going down in terms of race: "Who else can be sure that his critique of 'Māori separatism' will not be met with angry charges of racism and white supremacy? Peters' Māori ancestry cloaks him like a political force-field, allowing him to speak out fearlessly where Pākehā right-wingers are tongue-tied by timidity".

Trotter said in terms of challenging this element of the Labour government, neither National nor ACT had the same ability as the NZ First leader - "Neither Judith Collins nor David Seymour have the chops for this critical historical task. Only with Peters' help can Labour be defeated."

Much might now depend on how the Labour government deals with the controversial He Puapua report. The allegation made by Peters in the weekend was that while his party was in coalition with Labour, the report was deliberately suppressed so they could not campaign against it.

For a more in-depth look at the controversial report, and how New Zealand First might be welcomed back to defeat it, see Graham Adams' Will He Puapua propel Winston Peters back into politics?.

* Bryce Edwards is Political Analyst in Residence at Victoria University of Wellington. He is the director of the Democracy Project.