Power Play - This was not the "minor reshuffle" billed by Judith Collins: National's new-look line-up, suddenly blown apart by two gaping holes in the front bench. 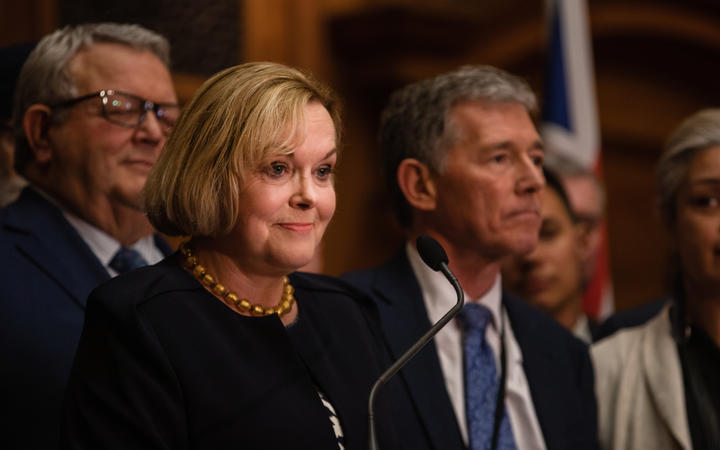 Once again, the party has been left reeling: this time by the shock exit of Nikki Kaye and the less surprising goodbye from Amy Adams.

Collins tried to play down the departures when she announced the reshuffle this morning, telling reporters they were "probably not a huge surprise".

If Kaye is to be believed, Collins herself was in "a bit of shock" after being told the news.

National MPs who've spoken to RNZ privately this morning say they are angry and disappointed at Kaye's decision and worry it would hurt the party in the eyes of the public.

Kaye today said it was her belief that MPs should "step up or step out". One of her colleagues characterised her move as "giving up".

Kaye had been regarded by some commentators as a future National leader - a former Education Minister and effective electorate MP with a record of twice defeating Labour's Jacinda Ardern in the Auckland Central electorate.

Her rising star has flamed out spectacularly in recent months.

Kaye struggled to get her footing as deputy leader, after having successfully plotted with Todd Muller to oust the leadership duo of Simon Bridges and Paula Bennett.

In her first days in the job, Kaye put her foot in her mouth, falsely identifying Paul Goldsmith as Māori, and both she and Muller appear to have demonstrated poor judgment in their handling of last week's Covid-19 patient leak shambles.

"This is personally the right time for me to leave," Kaye's media release reads.

Adams' departure is less surprising, having announced last year that she would step down at the election.

She performed a dramatic reversal after Muller took charge, but with Muller no longer leader, her renewed hope in the party has clearly fizzled.

Both MPs made a point of declaring that their decisions had nothing to do with Collins' appointment or the party's electoral prospects.

"I believe Judith is absolutely the right leader for the party at this time," Kaye said.

"I am in no doubt that in Judith Collins we have the right leader for the challenges ahead," Adams said.

For Collins and the wider National Party, it will be hard to shake the building narrative of a party in utter disarray.

To have any hope at September's election, National needs to look like a government-in-waiting and today's departures only undermine their billboard promise of a "Strong Team".

Collins has sought to address that in today's reshuffle, loading the most experienced MPs on to her front bench, regardless of their alliances or ambitions.

Bridges has a plum spot at number four, soaring up the ranks, with his key supporters Goldsmith and Todd McClay at three and six respectively.

Muller is not much further down at number eight. His backers Chris Bishop and Nicola Willis are at seven and 13.

All have been given significant portfolio responsibilities. Bishop picks up shadow leader of the house and Willis gets education.

Collins pointed out this was the first time National's front bench boasted two former leaders as well as the current.

"Don't you think that says a lot?" she told reporters.

It certainly does, but perhaps not what she hopes.