Power Play - National is now a party looking for a leader. 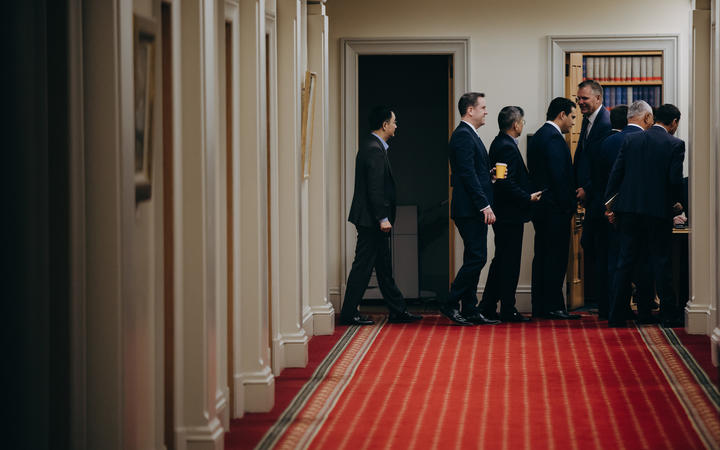 National MPs head to a caucus meeting on 22 May in which Todd Muller was elected leader. Today the caucus will meet again to discuss his replacement. Photo: RNZ / Dom Thomas

MPs have been thrown into a state of chaos with the shock resignation of Todd Muller after less than two months in the job.

The reason given was his health and by all accounts his personal situation meant it had become untenable for him to stay on.

It comes off the back of a brutal week where his leadership and integrity were severely tested after one of his MPs admitted to leaking the health details of Covid patients. Even before that Muller had struggled to make his mark in the unrelenting political and media environment.

The disadvantage of coming from the backbenches was palpably obvious. The leadership team around him was thrown together quickly and the lack of deep political experience was evident.

Whatever the reasons, the impact on his caucus is incalculable. They have just been through a rough and bitter leadership change which upended the party, that was then supposed to be settling in to fight an election campaign.

This morning though - another bombshell that took MPs as much by surprise as the public waking up to the news - they only learned about the resignation five minutes before the statement went out just after 7.30am. Senior MPs were said to be blindsided.

MPs are racing back to the capital for emergency discussion tonight, with little time to consider who could lead them into the election, or for the traditional lobbying and horse trading that goes on ahead of a usual vote.

This is very different to past leadership contests where there's either been a resignation or a challenge, the contenders line up and the caucus decides.

The man who really wanted the leadership, Simon Bridges, was defeated at the last vote. He was rolled because the majority of MPs believed he was not resonating with the public and had lost the confidence of his caucus. His former deputy and campaign manager Paula Bennett has announced she'll quit politics and his chief of staff and chief press secretary have both left, so that leadership structure is gone.

More importantly would Bridges want his old job back and would the caucus back him as leader a second time around?

Will Judith Collins seize the day? She has long had leadership ambitions; she has struggled to get the level of caucus support needed to become leader but this may present her an opportunity - she's polarising within the general public, but has name recognition, plenty of mongrel and is popular with the National Party base.

There may be another potential leader waiting in the wings but now is not the time for another untested, unknown MP to take over.

Whoever does step up takes over a poisoned chalice. A party in disarray, disastrous headlines of the past week that will continue to damage National, despite Muller having gone, and a caucus that will be struggling to see a positive way forward nine weeks out from a general election.

The party's staff are surprised and disappointed, MPs will be shell-shocked and many will be asking the question: why was Simon Bridges rolled in the first place?