Analysis - Covid-19 presents additional risks to already-vulnerable people and to their pets, which may be the only source of trusted companionship and love in an abusive relationship. 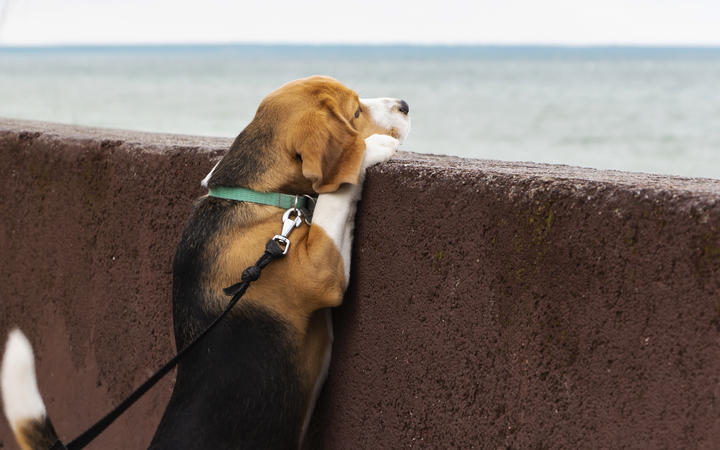 Evidence shows domestic violence increases during and after economic crises and pandemics. There is increasing anecdotal evidence that while government-imposed lockdowns are helping to contain Covid-19, a "shadow pandemic" is proliferating.

Animals do not feature in recent reports of escalating domestic violence worldwide, despite frequently being victims of violence themselves. Companion animals provide vital emotional support and may be the only source of trusted companionship and love in an abusive relationship.

With half the world's population currently under some form of lockdown, Covid-19 presents additional risks to already-vulnerable humans and animals.

Physical distancing measures increase social isolation and victims may struggle to access support or get respite from violence outside of the home.

Lockdowns provide unique ways for abusers to exert control over victims, including withholding medical assistance or financial resources, and restricting access to food or essential sanitary items. There are even reports of abusers withholding soap or showers, and forbidding handwashing.

Statistics released by the New Zealand police showed a 20 percent spike in domestic violence cases on the first Sunday after the country entered level 4 lockdown. Women's Refuge has reported increased demand in more than 60 percent of its shelters. Services for men who fear they might commit abuse have also received increased calls during the lockdown.

In Australia, 40 percent of frontline workers in a New South Wales survey reported increased requests for help with violence, while 70 percent reported an increase in the complexity of cases.

'The Link' - pets in the context of domestic violence

The link between domestic violence and animal abuse is well established. An Australian study found 53 percent of women entering a shelter reported their pets had also been harmed. In Canada, a study revealed animal maltreatment was present in as many as 89 percent of domestic violence cases. Research indicates there is an increased risk of severe or fatal injury where domestic violence and animal abuse co-occur in a household. Abusers use animals as a tool of abuse. Acts of violence towards animals are commonly inflicted in the presence of human victims to control, punish, or intimidate.

Many women delay or refuse to leave an abusive relationship due to fears for the safety of animals left with the abuser and because most shelters cannot accommodate animals. A New Zealand survey of women whose pets were abused as part of domestic violence revealed that 53 percent delayed leaving a violent relationship out of fear for their pet's safety and 73 percent would have found it easier to leave if there was a shelter offering temporary accommodation for their pets.

Given the high rates of companion animal ownership worldwide, we can be confident that many non-human victims of violence are suffering silently alongside their human companions.

Before Covid-19, many human and animal welfare services were already struggling under increasing workloads and insufficient resources. The pandemic has amplified these challenges.

Frontline support services have been reduced because of social distancing measures. Increased demand for services, coupled with negative impacts of the pandemic may further compromise the safety and well-being of those in abusive relationships.

Animal protection agencies are facing similar challenges. The SPCA estimates it will suffer a $1 million shortfall due its inability to fundraise during the lockdown. As the only non-government agency in New Zealand with the statutory mandate to prosecute animal cruelty offences, this loss of revenue poses a real risk to the animals the charity works to protect.

A global and community response

UN Women has called for innovative responses. In France, women visit pop-up counselling centres in malls and women in Spain use the code word "Mask-19" at pharmacies to alert pharmacists they are at risk of harm.

Women's Refuge is considering adding a live chat function to their shielded website, where women can report abuse without the site appearing in their browsing history.

As animal abuse is often part of domestic violence, advocates have called for similarly creative responses and increased community collaboration to ensure human and animal victims receive the protection they need. Increased pressure on resources and barriers to providing support mean that domestic violence and animal protection services must work together - more so than ever before.

Police, domestic violence helplines and shelters should ask those accessing their services about companion animals in the home and be alert to signs of animal abuse. Likewise, veterinarians and animal protection agencies may be well-positioned to uncover domestic violence. Essential workers - still moving relatively freely during lockdowns - may also be in a position to detect and report abuse to appropriate authorities.

Victims remain in violent situations due to a lack of viable alternatives for their pets, so agencies must help establish escape plans that include animals.

The current crisis highlights just how welcome initiatives such as Pet Refuge will be as New Zealand's first shelter dedicated to temporarily housing pets affected by domestic violence.

It is too early to predict whether the trend of escalating domestic violence will continue. Amid widespread speculation about when countries will emerge from lockdowns and how the world will look when we eventually return to 'normal' life, uncertainty is the only certainty. Covid-19 has highlighted how interconnected we all are. Not only in our own neighbourhoods and cities, but globally. Not only to other humans, but also to animals. If we take one positive from this experience, let it be cognisance of the impact of our actions on others.

The New Zealand government and our "whanau of five million" have so far done a remarkable job of "flattening the curve." Let us not undermine those efforts by failing the most vulnerable human and non-human members of our whanau.

* Bianka Atlas is the first LLM Animal Law student from Aotearoa and a recipient of the Brooks Institute for Animal Rights Law and Policy International Scholarship.