Opinion - It's going to be a "getting things done" election campaign and the government is setting the pace while National's Simon Bridges ponders post-election tactics and faces the most important decision of his political career. 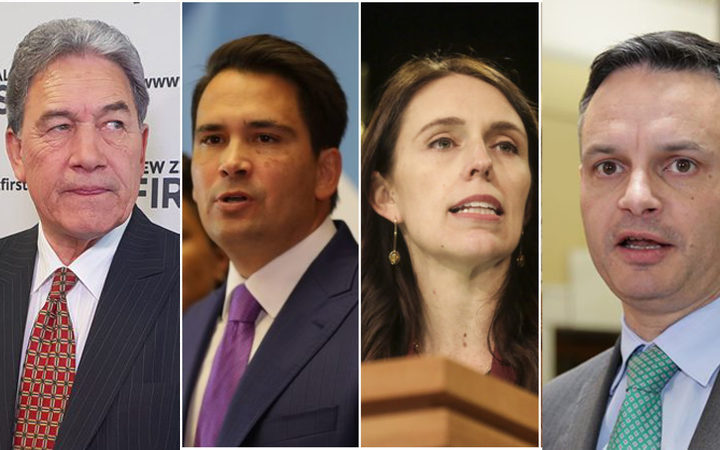 National leader Simon Bridges presides over a strongly-positioned party, but the party has no allies in Parliament. Photo: RNZ

Politicians, says Prime Minister Jacinda Ardern, are going to be campaigning from now until election day on September 19.

She's right, and the government started on Wednesday.

When Ardern announced the date at her post-Cabinet press conference on Tuesday she was asked what the main campaign issues would be.

She replied that her government inherited major challenges around infrastructure and it had started fixing them. "We have made good progress... I will be seeking the support of New Zealanders to keep going and get the job done," she said.

The next day, flanked by six cabinet ministers, she announced details of the $12 billion spend-up on infrastructure with $6.8 billion earmarked for transport in Auckland, Waikato, Bay of Plenty, Wellington, Canterbury and Queenstown.

"The previous government announced a number of projects but never funded them," she said, "This coalition government is committing and getting the job done."

It's a straight out election tactic, with twin objectives. The government wants to get moving and be seen to be getting moving. For most of last year National scorned it as a "do nothing" government and compared it with its own record of building roads. That hurt, and now Ardern and her ministers are turning it around.

It's a blatant u-turn. Some of National's big projects that were canned or put on the back burner after the last election have been resurrected - so Finance Minister Grant Robertson is able to talk about them being "shovel ready".

National's description of itself as "the party of infrastructure" has been taken away. On Wednesday Ardern used those same words to describe her government. It has neutralised one of National's main election issues.

The big infrastructure spend-up sits well with coalition partner NZ First, which sees itself as a champion of the provinces. But the Greens have been sidelined or worse - slapped in the face, says former MP Sue Bradford.

This doesn't fit at all with the Greens' focus on public transport and its strident criticism of the previous government's road building projects. It hasn't had much to say, however, and has probably been told "this is about winning an election".

All this action around "getting things done" is also intended to shut down criticism of things it didn't get done - such as the KiwiBuild train wreck and the capital gains tax failure.

It has also left National with little to say. The opposition can't complain about spending money on projects it says were in the pipeline when it lost the last election. Party leader Simon Bridges brings out this point, saying all it means is that two years have been wasted. He also doubts the government will deliver on all its road and rail promises.

Ms Ardern says the big difference is that National announced the projects and planned them but didn't fund them. National disputes this.

He told Morning Report he knew the problems New Zealanders were facing, and they would be his party's main campaign issues: "I want to put more money in people's pockets, a lot of people are struggling with more costs and burdens and tax... I want to make sure we are doing the infrastructure, the transport, the highways New Zealanders need to get around, and I want to make sure we are making families safer because gang and serious crime violence are rising significantly - these are the issues we will be fighting hard on."

But while Bridges was more than happy to talk about the problems facing ordinary Kiwis, he wasn't so forthcoming about his own big problem - what is he going to do about New Zealand First, and will he rule out working with it after the election?

National is very strong in opposition, with more seats than Labour, but apart from ACT it has no friends and isn't likely to find any. Bridges talks vaguely about "parties outside Parliament", perhaps thinking of Vernon Tava's sustainable New Zealand party, but the chances any newcomers making it are close to zero as Gareth Morgan's Opportunities Party showed us last election.

So National's best bet is to remove Labour friends, or the one that matters most. John Key did it in 2008, when he announced before the election that he wouldn't work with Winston Peters after it. NZ First didn't reach the 5 per cent threshold, and vanished from Parliament.

What he had done was to take away a slice of NZ First's support - it would have been pointless for anyone who wanted a National-led government to vote for the party.

Mr Bridges said he would announce his position soon. Suzie Ferguson tried hard but that was all she could get out of him.

It's going to be the biggest decision of his political career. If he says he won't work with Peters and NZ First doesn't return to Parliament, National could pick up enough support to form a government with ACT. But if NZ First did make it, he would have made a horrible mistake.

Peters knows NZ First support is spread across the spectrum, which is why he never says which party he will support after an election. Although it seems highly unlikely that he could ever work with National again after what happened last time, nothing is going to change between now and September 19 unless Bridges rules him out.

Stuff's Andrew Vance put it this way in an article urging Bridges to rule him out: "Better to rip off the band-aid, and prevent NZ First exploiting their position as kingmaker. It sends a strong message to centre-right voters that a tick for National is the only way to change the government. And it would save us all from an entire year of Peters' tiresome equivocations."

Bridges had another difficult issue to deal with this week. The Serious Fraud Office announced it had laid criminal charges against four people over the $100,000 donation to the National Party that went into its bank account in smaller chunks, which avoided having to declare it and identify the donor.

The individuals were not named and the party issued a statement confirming neither Bridges nor the party were being charged. "This was always just a vendetta by a disgruntled former MP," Mr Bridges said.

He was referring to Jami-Lee Ross, who claimed in October 2018 that Mr Bridges asked him to collect the donation from a Chinese businessman and deal with it. Mr Bridges and the party have consistently denied any wrong-doing.

The individuals will appear in court on February 25. The case isn't likely to have an impact on National's poll ratings because the party is in the clear, but it could be a distraction. Politicians need what they call clear air to get their messages across, and for National MPs it could be hard to find.