First Person - Like many other people I settled in to watch the final pool game of the 2019 Rugby World Cup with great anticipation. 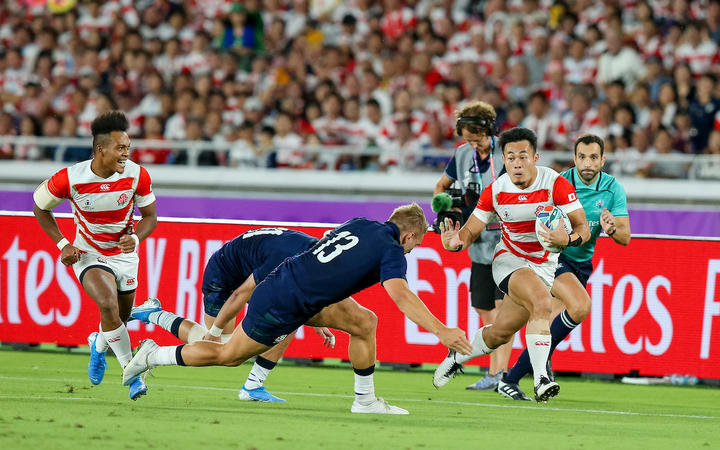 Kenki Fukuoka and Kotaro Matsushima of Japan during the Pool A match between Japan and Scotland at International Stadium Yokohama. Photo: Photosport / AFLO

With my bubble tea in hand and a questionable Spark Sport connection, I cheered on the Brave Blossoms in arguably one of the best games in the tournament so far.

(I mean, did you see those offloads in that 26th minute Japanese try and then the Scotland comeback in the second half?!)

No-one even knew whether it was going to go ahead until just hours before kick off, leading to accusations being traded about different countries trying to influence the decision.

I will be the first to put my hand up and say that I would have been very disappointed if the Japan v Scotland match did not go ahead.

But to say I was uncomfortable with some of the commentary on social media around the cancellations when Typhoon Hagibis had killed people and forced the evacuations of millions of residents would be putting it lightly.

In the end, after all the debate, Scotland went home and the hosts put their critics to rest.

Or so I thought.

"The people on that team aren't even Japanese."

"My dog looks more Japanese than some of the players."

We have moved on from calling the Japanese wins a 'fluke' to questioning the ethnicity of the players.

Let's unpack that for a second - what makes someone Japanese?

What if they went to school there, speak the language, are now 31 years old and have been there since they were 15? (Michael Leitch).

What about World Rugby's tightened regulations about living in that country for five consecutive years?

Apparently someone is only Japanese if they have black hair, slanted eyes and a yellow tinge to their skin.

I, for one, am done with that kind of rhetoric, like Scotland are done with the 2019 Rugby World Cup.

(Although technically they're not done, because World Rugby has referred comments by the Scottish Rugby Union about cancelling the match to an independent disputes committee).

I don't look Pākehā or Māori though, so I guess I'm not a New Zealander.

While we're talking about the importance of facial structure and colour, I assume that means all the Pasifika players in the English, Irish, French, Australian and New Zealand teams are also out.

But what those comments really mean, is that without 'foreign players', Japan, who have finished top of their pool, would have lost.

Looks like I missed the memo when rugby stopped being about a team sport.

Here's a wild idea, why don't we focus on the footy that is being played and not the colour of someone's skin?

Now, please excuse me while I go and sip on my bubble tea and watch Japan beat South Africa.