Comment - On 22 May, 2014, the Royal Thai Armed Forces, led by General Prayut Chan-ocha, stepped in to end six months of violent street battles across Bangkok with a coup. 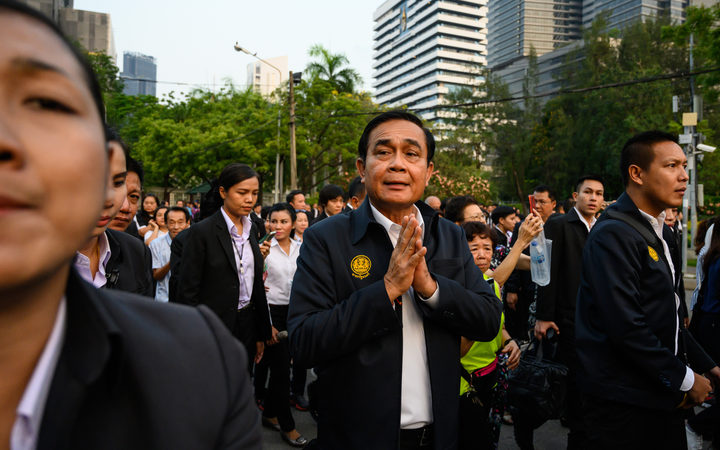 It was the country's twelfth since 1932.

In an all too familiar process, a democratic election's result was hijacked and corrupted, with the Army intervening to quell the violence between opposing sides.

It is a cycle that has struck Thailand politics more than once.

While many in Thailand saw the coup as a cynical re-establishment of power by the military class backed by business and the royal family, it's fair to say many of Thailand's middle-class were relieved to have some sense of order restored to the country after months of chaos.

Five years on, their patience has worn thin and they sense their country falling behind economically, their standard of living dropping, and their Association of Southeast Asian Nations (ASEAN) neighbours seemingly doing better at their expense.

Meanwhile, the wealth gap grows for the country's 69 million people, with the richest one percent are now estimated to own more than two-thirds of the country's wealth.

Thais go to the polls this Sunday, hoping something approaching a workable democracy may emerge from the election, but knowing the military and the general - now Prime Minister Prayut Chan-ocha - have seemingly stacked the deck against that possibility.

In the last real election in 2011, The Pheu Thai Party prevailed, only to be stripped of power three years later.

Polls indicate it still has a fighting chance of winning, albeit as part of a coalition.

Now exiled, Mr Thaksin still has huge influence in the country, and real control over important political actors. Parties linked to him have won every election since 2011.

Polarisation between the largely rural-base "red shirt" supporters of Mr Thaksin, and the mainly urban-based "yellow shirts" who support the royalist military establishment, has been the source of political violence in the past, and could be again.

In 2017, the junta introduced a new constitution, in large part to temper the ability of Pheu Thai to take power. Smaller parties are now advantaged in the allocation of party seats in the country's modified version of MMP.

But the unfortunate result could be a mish-mash of small, anti-military parties, unwilling or unable to form a coalition against the military-backed Palang Pracharat party, and its minor coalition hopefuls.

Palang Pracharat contains government ministers and veteran politicians from other, older parties. It is confident it can close the door on Thaksin and bring peace to Thailand.

Add to that a group of older regional parties - who could swing either way - and you have a recipe for an incredibly complex poll.

Even more problematic is the fact the junta can appoint all 250 senators in the upper house for a five year term.

These senators are charged with voting for the prime minister, who doesn't even have to be an MP, and most of the candidates have been hand-picked by the junta deputy General Prawit Wongwusan.

The result looks likely to be an entrenchment of power by the military, as for a majority to win the election they only need to cobble together a coalition of 126 seats in the 500 seat lower house.

The Thai Royal Family, always a key political player, has grown more influential under the control of new King Maha Vajiralongkorn, whose coronation is scheduled for early May, by which time the make-up of the new government may still not be known.

And while the king awaits his crown, the pro-military parties hint at a nostalgic "strongman" politics, in a region that has seen its share of authoritarianism lately.

But is a sham election better than no election?

Maybe, in this case, but unfortunately the result may not be a return to democracy, but instead the birth of a new Thai martial democracy, attempting to legitimise a military regime that has found it quite likes being in charge.

Worse, it may be the beginning of a whole new round in the vote-violence-coup cycle so familiar in Thai politics.