Opinion - Today I was called a fascist who opposes free speech, which surprised me for two reasons. 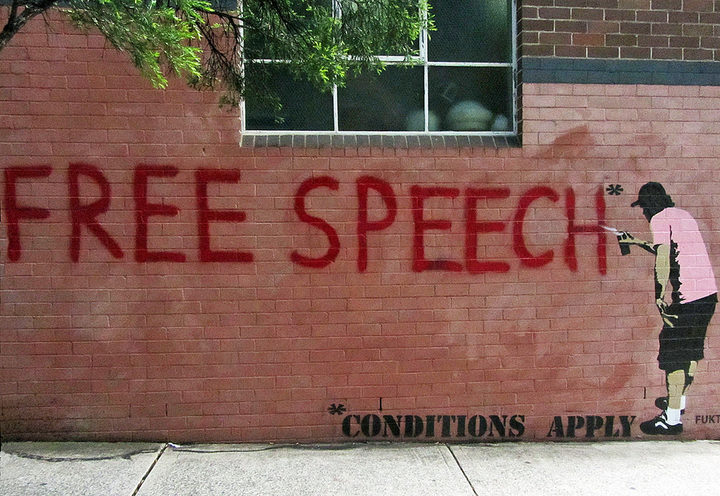 Secondly, I was surprised because free speech is how I make my living and "holding those in power to account" could very well be a short description for what I've done for a job for many years.

I love the ability to speak freely, to be able to pick up the phone and call someone and ask a question. I like that the media, the fourth estate, is able to hold the other branches of society to account on behalf of all of us. It's essential to common democratic processes and to decency.

One of those limits is around objectionable content and obscene imagery and that's where things get more difficult given our current circumstance.

There is a strong argument to be made for not publishing the video of the mass shootings in Christchurch. A very strong argument. That it breaks New Zealand publication laws to do so is, I feel, the least of the arguments - it is deplorable, it serves only to increase the damage done by this foul act and it gives others of a similar disposition the support they might need to do something equally abhorrent. It normalises the behaviour and any psychologist will tell you that's a step on the road towards accepting such behaviour as part and parcel of everyday life.

I do not want that for my children or yours.

So it seems obvious to me that blocking the video from being screened and taking it down wherever it is shared (be it online, on television, wherever) is something that makes a lot of sense. And I would suggest I'm not the only one - YouTube says it has blocked 1.5 million instances of the video in the first 24 hours or so after the shootings took place.

New Zealand's largest ISPs decided to try to block the video from being played here as much as they could and I think that was the right thing to do.

Apparently we're fascists because free speech must trump all other considerations, so there's that to consider. This gave me pause for thought, to put it mildly, so I had a look online to see if I was a fascist.

What I found is that this is a common tactic used by the far right, something they frequently pull from their hat whenever challenged about their views. You're supposed to be tolerant but they say you can't tolerate my comments, therefore you're worse than I am.

But you can see the fatal flaw in my argument, can't you? What about progressive change? What about those brave folk who challenged the law as it was (say the law banning homosexual behaviour) and demanded change? Under your model Paul, they would be denied a voice and aha! You're a fascist again.

It turns out this model of argument is also part of the arsenal of the far right.

There's a very long but very useful video clip on (oh the irony) YouTube posted by a philosopher about just this set of tactics. Happily, the hour-long video is broken into sections and this section is incredibly useful at explaining how the far right twist arguments, especially around free speech. It also goes a long way towards explaining why the manifestos of various extremists are so chaotic and contradictory. The upshot is the message isn't contained within the manifesto, it is the mere presence of one.

It doesn't really matter what they're saying, simply having it published and having the world pore over it to decipher its hidden meaning is a massive nod to their fellow extremists.

Welcome to the world of "shit posting" where those of us in the media and on the left of the spectrum will be bamboozled by random comments, arguments not made in good faith designed to keep us talking about the content when it's totally irrelevant to what's in these posts, and even those crazy hand signals they seem determined to flash up on TV.

In that environment, arguments in favour of extremely free speech simply fall down because the other side, the actual fascists, aren't arguing in good faith about a philosophy - they're just arguing because the more they do that, the more they normalise their views and the more we as a society fail to deal with the real issues.

I don't want the CEOs of our major telcos deciding what I can and can't watch any more than I want the CEO of Facebook making that decision. But I am happy not to have this vileness shared and if that makes me the villain of the piece then so be it. I'd rather focus on making sure this doesn't happen again than worry about upsetting the far right.

* Paul Brislen is a technology commentator