Analysis -The government puts on a show of unity and sorts out the refugee quota, but another ministerial sacking spoils an otherwise good week. The troop deployment to Iraq is extended, while in Parliament Winston Peters taunts National: We "know" who the leaker is. 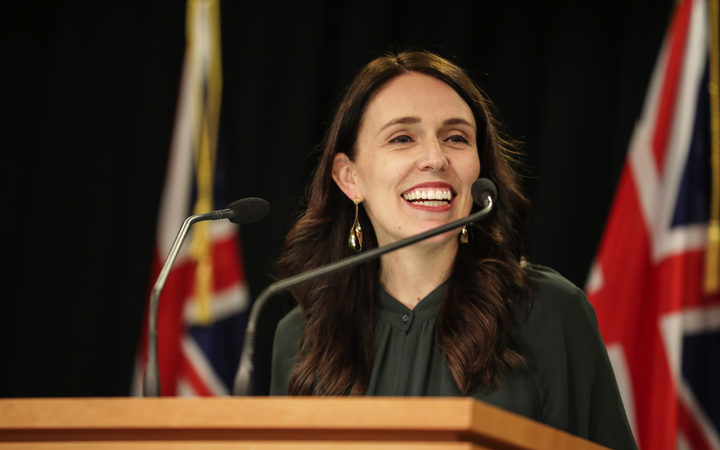 Prime Minister Jacinda Ardern addresses media at a post-Cabinet briefing. During the week she rejected reports of cracks in the coalition. Photo: RNZ / Richard Tindiller

The government began the week with a piece of political theatre designed to shut down a fortnight of bad news and negative reports about policy differences between Labour and NZ First.

It was presented with the bubbly enthusiasm she's so good at but there was nothing new or particularly encouraging.

Feel good policy priorities such as an economy that is growing and working for all of us, improving the wellbeing of New Zealanders and making New Zealand proud would fit into any party's aspirations.

What she was really doing was showing who is in the driver's seat - and it's not Mr Peters.

In subsequent interviews Ms Ardern and Mr Peters rejected "cracks in the coalition" reports and dismissed policy differences as simply MMP in action.

"What I refute is any suggestion that there is any disunity," Ms Ardern told RNZ.

Mr Peters joined in the togetherness, saying that in 11 months the coalition had made 1057 "unified" decisions.

Mr Shaw was there to remind people the Greens have an essential role to play as well, in case anyone had forgotten.

The media largely saw the unity performance for what it was, but Ms Ardern was soon able to deliver something real.

Labour's policy is intact, although implementation will take a bit longer than originally intended, and NZ First has no problems with it.

The quota, and Mr Peters' comments about not having signed up to it, was one of the issues that generated reports about coalition disunity.

It seems there is now no disunity, and Mr Peters blamed media mischief for any impression that there might have been.

For Ms Ardern, nailing down the quota increase was a must do thing before her weekend departure for the UN where one of the main issues is going to be the global refugee crisis.

Now she'll be able to hold her head up and say New Zealand is doing its bit.

The prime minister then had to make an announcement that demonstrated the difference between being in opposition and being in government.

New Zealand's troop deployment to Iraq, due to end in November, would be extended until June next year, she said.

Labour, NZ First and the Greens opposed the deployment when they were in opposition - it was much easier then to go against what the previous government saw as an international commitment and it led to former prime minister Sir John Key shouting at them in Parliament "get some guts and join the right side".

Defence Minister Ron Mark conceded the National-led government had made the right decision to send troops to Iraq on a mission to help train local forces and said that since taking office he had visited the region and seen how effective they were.

He also made the point that he now had access to information which he didn't have in opposition.

That's valid, that's the way it goes when decisions of this nature have to be made.

For the Greens, however, it was too much to swallow but they didn't make a fuss about it and limited their reaction to being "disappointed". They still think the money the deployment is costing should be spent on humanitarian assistance.

On Thursday Ms Ardern sacked Customs Minister Meka Whaitiri after receiving a report on the "staffing matter" reported to have involved a physical confrontation with her press secretary.

"While the facts are in dispute, the report says an incident occurred," Ms Ardern said.

"I have made my decision solely on this incident."

She said she had lost confidence in Ms Whaitiri as a minister.

The MP was stood down after the 27 August incident while Ministerial Services held an inquiry.

Kris Faafoi, who held the customs portfolio during the stand down, will keep it.

The sacking closely follows the Clare Curran fiasco, which saw her sacked from Cabinet and then resign as a minister.

Ms Ardern had faced opposition claims that she was weak in her handling of the Whaitiri issue.

National's leader Simon Bridges can't continue to run that line, but the sacking gave him another opportunity to say the government was a shambles.

Mr Peters used Parliament's general debate this week to have some fun at National's expense.

He noted 22 days had passed since the party launched its inquiry to discover the identity of the person who leaked details of leader Simon Bridges' travel expenses, which is being undertaken by PWC and Simpson Grierson.

"The New Zealand taxpayer is paying for this mindless, hopeless inquiry the end result of which we already know," he said.

"Why not cut to the chase - give us the money and we'll give you the answer."

The police know who the leaker is but won't tell National.

Mr Peters clearly believes, or thinks he knows, that it was a National MP.

He said he didn't want to look across the floor of the House at the opposition benches.

"I won't look at them because if I do, or look where they should be, then suspicion will be passed on without us getting the reward of disclosure."

*Peter Wilson is a life member of Parliament's press gallery, worked for 22 years as political editor of NZPA and seven as parliamentary bureau chief for NZ Newswire.