Opinion: Donald Trump persists in calling the Mueller investigation into the 2016 election a "WITCH HUNT". His hardcore supporters keep cheering, but for everyone else the description is becoming surreal. 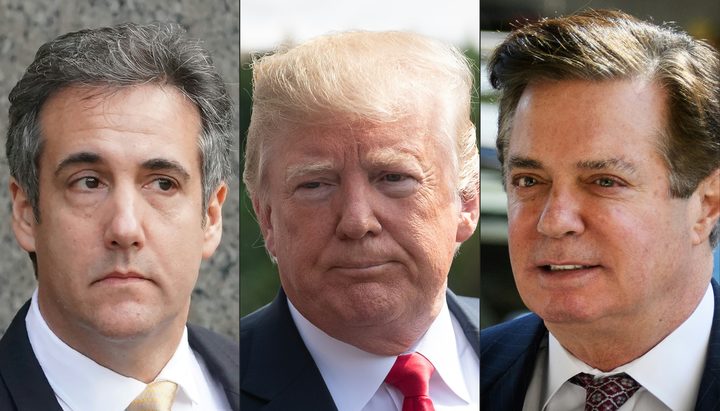 As of yesterday's guilty plea from Trump's former 'fixer' Michael Cohen, and the guilty verdicts on his former campaign manager Paul Manafort, the Mueller investigation has (by my count) dragged in indictments or guilty pleas on 31 people and three companies. That's a lot of witches.

Twenty-five of those people are Russians, but over time they have included an increasing number of Trump's inner circle.

Robert Mueller's FBI career included big mafia takedowns. He found evidence on a small fish in the gang, used that evidence to squeeze them to squeal on the next fish up the line, and so on, until he got to the Don at the top.

The Don technique seems to also work on Donalds, but there's a hitch.

Unlike mafia bosses, a president can pardon the smaller fish, removing the 'squeeze' that leads investigators up the line. There have been suggestions that Paul Manafort's apparently relaxed defence (no witnesses at all), and the lack of a plea deal may be because he expects a pardon. He reportedly winked at his wife as he left the court yesterday.

There is, however, a hitch with this hitch. The verdicts this week are for federal crimes (which the President can definitely pardon); but both Manafort and Cohen will as likely have committed similar offences under state law in New York and Virginia (which cannot be pardoned by the President). A pardon might also add to the president's legal worries.

I can think of five crimes that the investigation might aim to pin on the President.

It is a crime, under campaign finance law, to pay money for the benefit of a campaign and not report it. Michael Cohen pleaded guilty to having broken two different laws by paying 'hush money' to women on the instruction of "the candidate" (Trump). He directly implicated the President in the same crime. He even taped a conversation between them about it.

It is a crime for a group to plan to commit a crime whether or not the crime is carried out. This is called conspiracy. This sounds a lot like what Trump's celebrity spokes-lawyer Rudolph Giuliani described on TV on Sunday: "the meeting was originally for the purpose of getting information [sic] about, about Clinton." Whoops.

It is a crime to interfere with an investigation. This is obstruction of justice, and it's serious. This may be where Mueller focused his 30 hours of interviews with White House counsel Don McGahn, who had refused to fire Mueller when Trump asked him to, and who was surely 'in the loop' over the sacking of former FBI director James Comey. Trump put himself in the firing line for this when he said on NBC that "this Russia thing" was a reason for dumping Comey.

Finally, it is a crime to lie to an FBI agent. This is why Trump's lawyers are terrified of letting him be interviewed by Mueller. The odds of the Donald perjuring himself are surely high as he changes stories constantly. It was in reference to this problem that Giuliani recently declared "the truth is not the truth".

You'll note that despite Trump constantly declaring himself innocent of it, "collusion" is not listed above. As far as I'm aware, there isn't a relevant crime called collusion.

So, What Happens Next?

We shouldn't expect Mueller to finish any time soon, though he is moving much faster than some similar investigations. His investigation is just 14 month old. The Whitewater investigation into the Clintons took seven years, while the Iran-Contra one took more than six.

So there may be many more shoes to drop yet. The soap opera may go quiet for a while leading up to November though, as the Justice Department usually tries to avoid investigations influencing elections (despite James Comey's 'more emails' bombshell 11 days out from the Clinton/Trump vote).

Regardless of what he finds, Mueller has said he won't indict Trump, but simply deliver a report to the Justice Department. Legal scholars disagree on whether a sitting President can even be indicted or only impeached by Congress.

Impeachment would only occur if the Democrats win back the House in the November elections, which they are looking like doing despite the increasingly uneven playing field in some states.

If the House did vote to impeach, the Senate would then hold a trial over the charges with the only 'guilty' outcome being removal from office. This would require a two thirds vote in a senate with a likely Republican majority so is highly unlikely. Republican congressmen can barely bring themselves to even criticise their president, regardless of the incitement.

Either way, an impeachment trial doesn't preclude criminal charges upon leaving office. A deal to avoid impeachment and possible charges was what led to Nixon standing down after Watergate. Trump is less likely to go quietly.