A jury has reached a verdict on eight charges against US President Donald Trump's former campaign chairman Paul Manafort in a case of bank and tax fraud. 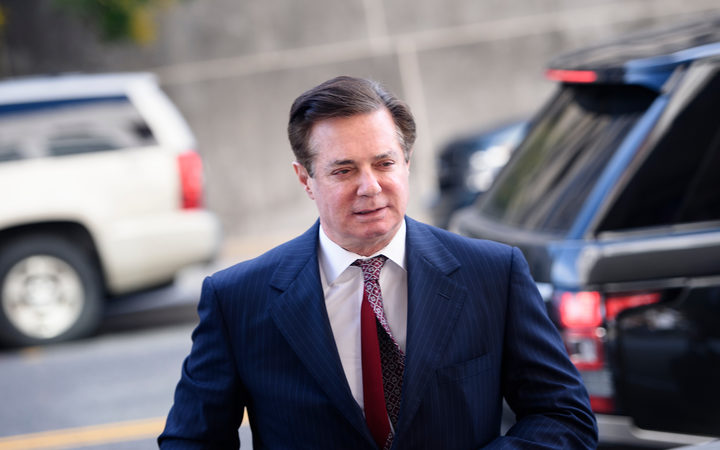 After deliberating for four days, however, the jury of six men and six women told the judge it had failed to reach a decision on 10 other criminal counts Manafort faced in the first trial stemming from Special Counsel Robert Mueller's investigation of Russia's role in the 2016 US election.

The jury found Manafort guilty of two of nine bank fraud charges, all five tax fraud charges he faced and one of four charges of failing to disclose foreign bank accounts.

Judge T.S. Ellis declared a mistrial on the other 10 counts.

Manafort, 69, who ran the Trump campaign for three months, was accused by prosecutors of using numerous accounts in order to evade tax.

Prosecutors accused Manafort of hiding from US tax authorities $US16 million he earned as a political consultant for pro-Russian politicians in Ukraine to fund an opulent lifestyle and then lying to banks to secure $US20m in loans after his Ukrainian income dried up and he needed cash.

Manafort's conviction on the eight counts came on the same day as Trump's former personal lawyer, Michael Cohen, pleaded guilty in New York to campaign finance violations and other charges.

While Mr Trump has sought to play down his connections to him, Manafort worked for five months on Trump's 2016 campaign during a pivotal period in the presidential race, including three months as chairman.

'It does not involve me' - Trump

Manafort's lawyer, Kevin Downing, told reporters afterward that his client was disappointed in the verdict and was evaluating his options.

Mr Trump tried to distance himself from Manafort's conviction on bank and tax fraud charges, saying it did not involve him.

"I feel very badly for Paul Manafort," Mr Trump said as he arrived in West Virginia for a rally on Tuesday night.

"It does not involve me.

"It has nothing to do with Russian collusion, we continue the witch hunt."

Mark Warner, the senior Democrat on the US Senate Intelligence Committee, said in a statement that the verdict refuted Mr Trump's repeated charge that the Mueller investigation was a "witch hunt."

He warned that any attempt by Mr Trump to use his presidential powers to pardon Manafort or interfere in the Mueller probe "would be a gross abuse of power and require immediate action by Congress."

In the Alexandria, Virginia, courtroom, Judge Ellis gave the prosecution until 29 August to decide whether to retry Manafort on the charges on which the jury deadlocked. As a result, the judge did not set a sentencing date for the other charges.

The judge asked jurors whether they would like to have their names remain secret and they said yes. He told them, however, that they could speak publicly about the case if they wanted.