Analysis - Auckland is at a fork in the road for the first time since amalgamation with big choices for residents and calls for political courage in the proposed shake-up of the rating system. 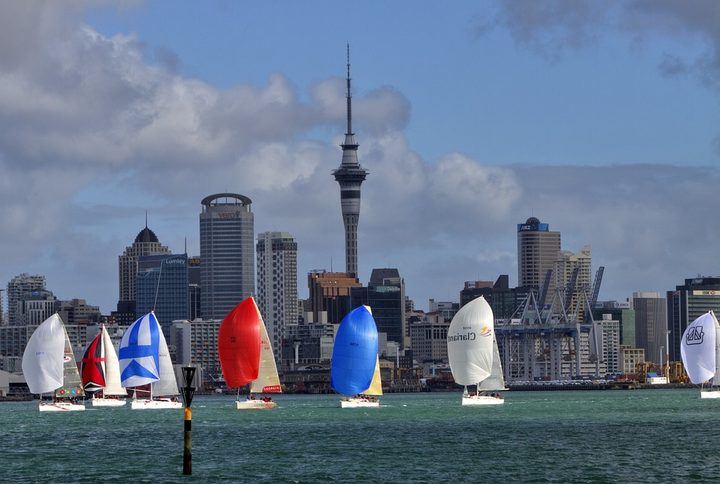 It's about whether the city can find an affordable way to ramp-up tackling the consequences of growth and of past neglect - infrastructure investment, and environmental protection.

The mayor Phil Goff has clearly faced strong political pressure to drop his "2.5 percent rate rise" mantra, which served him well on the campaign trail, and face the real cost of fixing Auckland.

The answer is 6.2 percent, and swapping out a $114 transport levy for a 10 cent a litre fuel tax. Two layers of rates are added to the basic 2.5 percent. A Water Quality rate of around 2.8 percent, and a Natural Environment Levy, of around 0.9 percent.

The 6.2 percent is a number that may have proved fatal if bandied around on the campaign trail.

An end to sewerage flowing into stormwater systems, waterways and beaches, threats to the environment such as kauri die-back, and from pests and weed infestations.

Infrastructure that enables a faster build of new homes.

The 10 Year Budget, aka the Long Term Plan, is the next big step in dealing with these and the myriad of other needs in a city growing annually by the population of Invercargill. 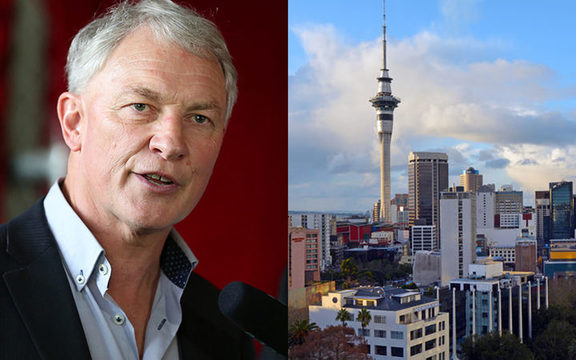 Mr Goff proposes a 33 percent, or $6.3 billion, boost to capital projects over the next decade, including clearing up most of the stormwater problems in 10 years, rather than 30.

"This is our time to be brave," the Environment and Community chair Penny Hulse, told councillors as they had their first look at the plan, and gave it a conditional thumbs-up.

But how much courage will there be?

Even with an overall proposed rate rise of 6.2 percent, Mr Goff has included only the lower of two possible Natural Environment targeted rates, the 0.9 percent add-on, rather than the 2.6 percent add-on.

Aucklanders will need some clear information on exactly what the layers on top of Mr Goff's prized 2.5 percent general rate rise will deliver. They'll also need a far clearer picture than given so far, on what the choices cost.

RNZ has dug a little deeper than the initial material provided by Mr Goff, which broke down the costs only for an urban home worth $1.078 million.

The table shows the differing impact both in percentage rate rise terms, and in weekly cost, for four values of homes in Auckland, of Mr Goff's proposal.

The weekly cost lines show the add-on cost of beefing up the water quality and environmental protection programmes. 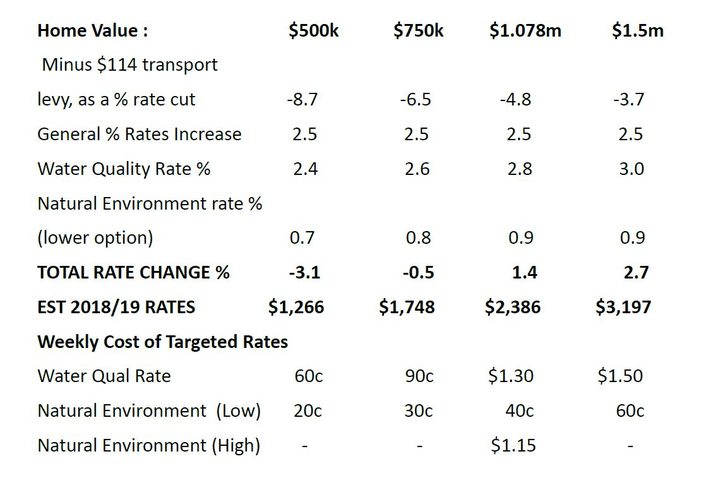 The impact of the fuel tax is the big unknown in the equation, and one highlighted by Councillor Daniel Newman, who represents communities in the poorer Manurewa-Papakura Ward.

"There will be people in my community who will feel this ... I'm concerned there's a cost that will be borne by those who can least afford it," he told the meeting.

Household consumption of 19 litres of fuel a week will pay under the new regional fuel tax the equivalent of the outgoing $114 interim transport levy, above that it's an extra burden.

Those who do most of their mileage on public transport, walking or cycling, will obviously pay little in fuel tax.

Councillors also flagged other areas that might need more money, such as culture, sports, parks and recreation. The politicians need to find a way to make the above arithmetic well-understood by all Auckland households, along with the benefits that will flow.

The consequences of a superficial argument based entirely on percentages, risks a dirtier, congested Auckland, and a bigger job for a future generation, than past ones have left for today's.