Analysis - The art of compromise has delivered two new encroachments into Auckland's Waitematā Harbour, both in the name of creating jobs, Todd Niall reports. 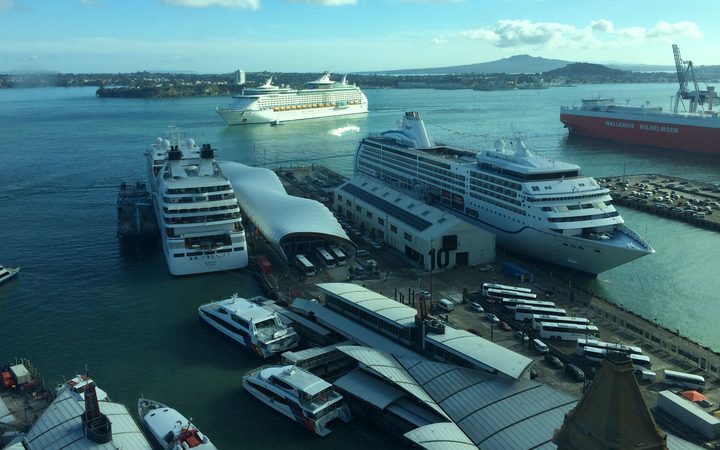 Two mooring platforms will be built out from Queen's Wharf. Photo: Auckland Council

The Auckland Council has settled on a 73m extension of the northern face of the Halsey Street Wharf as the centrepiece of a compromise plan to spread America's Cup bases across three wharves.

The cup defender Team New Zealand had wanted a 220m extension to create a focussed venue], but has reluctantly agreed to go along with the cheaper, quicker and less contentious option.

Several hours earlier, councillors voted 14-5 in favour of building two mooring platforms, up to 85m out from the end of Queens Wharf, linked by a walkway for workers tying up large cruise ships.

Mayor Phil Goff played a key role in both decisions, and based both on the part they would play in creating jobs, especially for Auckland's young and unskilled.

Mr Goff cited economic impact forecasts for the 2021 America's Cup event, which estimate between 4000 to 8000 jobs will be created, part of total estimated benefits upwards from $555 million.

The extensions will be built on piles, so will not clash with his mayoral election policy that said: "Auckland's Port will not be allowed to encroach into the Waitematā Harbour with further reclamation."

"Reclamation" involves filling-in the harbour creating solid land. Not a wharf on piles.

The mayor's most stirring address on job creation came on the cruise mooring vote.

One of Mr Goff's first moves upon election in October 2016 was to halt a plan to build a mooring 75m out from Queens Wharf, linked by a public walkway.

Mr Goff was not convinced about the $10m cost, nor the need for the walkway to get port staff onto the mooring.

It's taken a year for a series of technical reports to come back recommending two smaller platforms on a longer, restricted walkway.

The difference is to cater for yet another generation of even newer cruise ships due to start arriving in five years or more - ships the 75m option might not have managed.

While unconvinced about the health and safety arguments for the worker's walkway, Mr Goff pointed to reports forecasting additional jobs from the steady rise in visits by larger cruise ships - up from 40 in 2006 to 135 next year.

"We've got 800 extra jobs that are coming next year - but are we prepared to give that away?" Mr Goff challenged councillors.

"That's easy for those of us who are quite well-off, and well-employed and middle-class, I'm interested in the kids out there," he said.

One casualty of the delay is a visit scheduled this summer by Cunard's Queen Mary 2, but cancelled in favour of Tauranga because Auckland will have nowhere large enough to berth it.

The later decision on the America's Cup village compromise is driven mainly by worries of a public backlash to a significant wharf extension.

The smaller, scattered village will cost $37m less to build and run during the regatta.

But those savings will soon evaporate. The larger Halsey Street Wharf extension included 18 extra superyacht berths and over the two-years spanning the Cup, will earn $18 million less in superyacht berth fees.

Every year beyond that it will earn $5m less. If those forecasts can be believed, within six years the cheaper option won't be cheaper anymore.

Team New Zealand is still hoping to squeeze some more berths into the compromise plan, to increase its economic benefit, but the politicians have saved themselves a potentially ugly backlash.