Analysis - The fault in the fuel pipeline from Marsden Point has produced calls for better care of all New Zealand's infrastructure, with industry leaders saying there should be more regular checks of pipes and wires and better backup for when things go wrong. 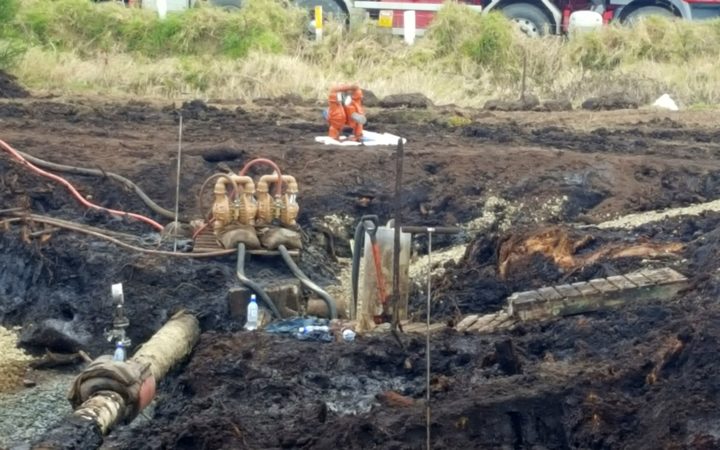 The site of the damaged pipe, seen in the lower left of the photo. Photo: RNZ / Lois Williams

Reports prepared for the Ministry of Business, Innovation and Employment from 2012 found it would not be cost effective to provide a second pipeline in case the first one fails.

Nor would it be cost effective to have enough fuel stored in tanks to keep an area supplied for the full duration of a pipeline failure.

Almost no industry maintains 100 percent back up systems for failures that fall into the category of low-probability, high-impact events.

Many commercial businesses operate a just-in-time system, to keep storage costs for unsold goods to a minimum. That leaves very little room for error, but when it comes to vital infrastructure, the view differs.

The Maui gas pipeline failed due to a landslip in 2011, costing the economy up to $175 million a day, according to the New Zealand Institute of Economic Research.

There were two huge power blackouts in Auckland in the late 1990s and early 2000s and the vital Manawatu Gorge has been blocked twice in the past decade.

Earlier this year a Commerce Commission report said many power companies had out of date transformers, switching gear and power poles.

Mr Selwood said whoever won the next election would need to deal with this.

"The incoming government should give priority to reviewing all strategic infrastructural networks," he said.

"We have had too many incidents in the last few years and I would suggest we need oversight by a permanent commission.

"We have the Commerce Commission ... we have the Parliamentary Commissioner for the Enviornment ... but we do not have any central organisation for national infrastructure and this is an enormous gap in our strategic governance of New Zealand."

"Whether it's roading, whether it's electricity, whether it's fuel storage, these are things we can see coming, and we don't plan well enough for them," he told Morning Report this morning.

"We need to make decisions quicker than we do, and instead of being in catch-up mode, we need to have infrastructure that is growing for a growing population."