The Northland property where the Marsden-to-Wiri fuel pipeline was broken was mined for swamp kauri two to three years ago, neighbours say.

Refining New Zealand believes its pipeline was scraped by a digger some time ago, at Ruakaka, leading to corrosion that caused it to fail last Thursday.

The break forced the closure of the pipeline, which carries fuel from Marsden Point near Whangarei to Wiri in Auckland, upsetting the air travel plans of thousands. It caused two tanker loads of jet fuel to spill into a nearby culvert and surrounding soil.

Petrol and diesel supplies have also been affected, but Auckland's mayor says he's been assured vehicle fuel will not run out. 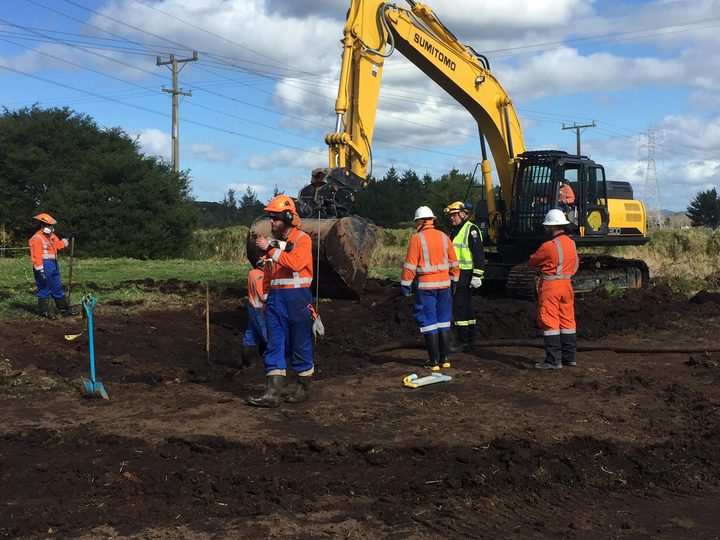 The site of the pipeline leak at Ruakaka Photo: Refining NZ

A neighbouring landowner said the property in question was dug over for swamp kauri just a few years back and massive trees buried metres deep had been pulled out of the ground.

"Some of these logs were huge. Probably some of the biggest logs I've seen pulled out of a swamp in recent times," the man said.

A veteran of the swamp kauri industry, Milton Randell, had reported seeing a kauri dig in progress near Ruakaka last Wednesday, the day before the pipe broke, at what he later assumed was the site of the break. But Mr Randell told RNZ that on reflection, the dig he spotted as he drove to Waipu may not have been at the pipeline site.

RNZ has confirmed that the earth around the pipeline was undisturbed when the refinery discovered the break on Thursday.

'Hello, we've got a problem here'

Jimmy Davis, a retired farmer whose house overlooks the pipeline site, said there were no diggers or activity at the property until Thursday when neighbours were alerted by the reek of jet fuel.

"Actually I smelled it first, and then they [the refinery] started taking corrective action and suddenly there was a lot of traffic around, and I thought, 'Hello, we've got a problem here,'" he said.

The neighbour who had watched the ancient kauri being extracted some time ago, who asked not to be named, is also an experienced digger driver.

He said an operator would know if he had hit something underground, but it might not have been a machine that did the damage.

The man said the swamp kauri diggers who excavated the property two to three years ago were operating at some distance from the pipeline easement, which was clearly marked.

But he said it might have been a kauri buried beneath the pipe that scraped it as it was pulled from the ground.

"I know myself when I'm digging drains, and you strike a big tree root, you give it a pull, and hello, you're pulling the ground up three metres away from where you're working.

"So it's not beyond the realms of possibility - because they were big diggers that they were using - that they could have hooked into the heads of one of those trees and disturbed the pipe." 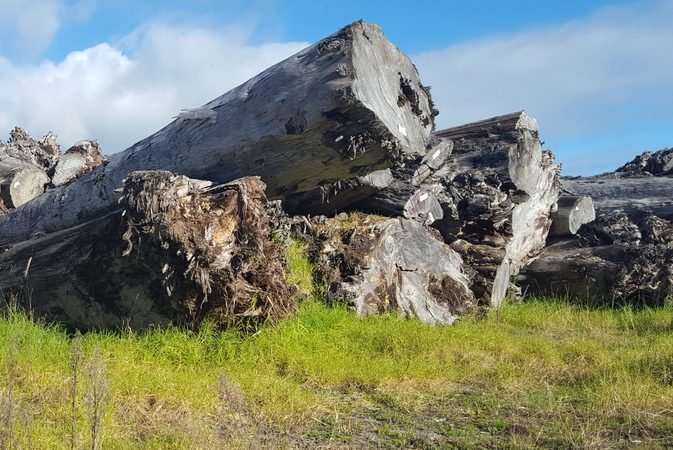 Refining New Zealand believes the damage to its pipe was done by a digger some time ago because it was corroded and the original damage must have happened since 2014.

Refinery manager Sjoerd Post said that was when the refinery last ran a check on the pipe's interior, using what is known as an 'intelligent pig'.

The electronic device runs through the pipe from Marsden Point to Wiri every few years and records any sign of damage.

Mr Post said there was no evidence of any threat to the integrity of the pipe at the Ruakaka site during the last pig-run in 2014.

"It [the device] gives us back every rust spot on the line; every scratch. It tells us, this many millimetres over there, there is a pit one millimetre deep, for instance.

"Then we have a preventative maintenance programme, and we go where those pits appear, we dig the pipe up and repair those pits. So we build confidence in the system that it predicts where those pits are with total accuracy," he said.

Mr Post said the refinery had been about to run the pig through the pipe in October, ahead of schedule, because the winter was very wet, which could cause slips and earth movement.

He said the quality of Refining New Zealand's maintenance and monitoring systems had been approved by regulating authorities as world-class.

But the break in the pipe had given the company pause for thought and it would review its interior pipeline inspection schedule once the current emergency was under control, Mr Post said.

Neighbours of the property where the pipeline broke said it had changed hands since it was dug up for kauri.

Refining New Zealand and local authorities have so far deflected questions about who - if anyone - might be held liable for the damage.

Mr Post said that was something the company would investigate eventually. But at this point, he said he was focused on the hazardous business of making the pipe safe, welding in a new piece to replace the damaged section, and making sure no-one was hurt in the process.