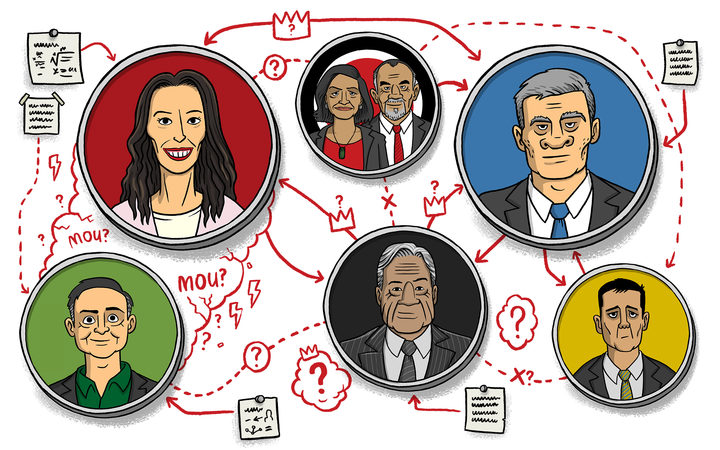 As the end draws near, how is the election of 2017 best described?

It is best described as a two-horse neck-and-neck drag race on a knife edge.

According to the latest Toby & Toby Poll of the Polls of Polls and Just General Gut Feeling, there is barely a cigarette paper between National and Labour, with the minor parties trailing a good distance behind.

NZ First and the Greens are hanging in there above the 5 percent threshold required to get into parliament without winning an electorate, but not by a lot. The Māori Party and ACT appear likely to return via that "coat-tails" rule.

Which of Labour and National is most likely to win?

No single party has won a majority under MMP.

Yes obviously. But which is likeliest to assemble a parliamentary majority?

All indications from data collected by the TTPPPJGGF are that this is a two-horse neck-and-neck drag race on a knife edge, but that neither of the main parties is likely to be able to form a single-party minority government, as did the National Party three times over under John Key. Whichever forms a government is likely to need more than the support deals that Key secured - and to form a coalition government. Even that may, however, need support deals to command a majority in parliament.

But didn't Key form a coalition with ACT and the Māori Party?

No. Those were so-called "confidence and supply" deals, in which the two smaller parties agreed not to bring down the government and to support budget votes. Confidence and supply deals can also involve ministerial roles for support parties, though they typically do not attend cabinet meetings unless their portfolio is being discussed, which means they are not bound by cabinet collective responsibility, i.e. can bitch openly about the government.

Wasn't there another support party for National?

Hard to recall, it all seems so long ago.

What then are the scenarios that could eventuate after Saturday?

If NZ First can outperform its polling in the final count - as it has done in the last couple of elections - then there is a good chance it could determine which of National or Labour governs. That would likely involve a formal coalition but not necessarily. In 1996, National and NZ First coalesced; in 2005 Labour and NZ First reached a confidence and supply deal. Neither ended well.

What about the Greens - don't they have a Memorandum of Understanding with Labour?

Yes. That's all a bit tense at the moment, and that MOU was always going to expire on election day, but Labour leader Jacinda Ardern has said that, numbers willing, her first phone call will be to the Greens. One recent poll suggested that Labour and the Greens could yet form a majority coalition.

This doesn't seem all that "definitive" after all.

The TTPPPJGGF conclusion is definitively uncertain.

What about a bit of Ardish?

What about Ardern's Labour and English's National forming a grand coalition?

If some terrifying world war or regional catastrophe unfolds in the next few days, sure.

Does the biggest party get the first go at forming a government?

There is absolutely no rule written anywhere requiring that. However, some believe there is an "expectation", in the words of Jacinda Ardern the other day, that the largest party should get the first shot.

Right, and how does MMP work?

Seems a bit late in the piece to bring that up.

Sure, but just briefly?

Everyone gets two votes, one to choose a local MP and one for the political party. Your party vote is by a long stretch the most important one - those are the numbers that determine the composition of parliament.

And why had this piece not mentioned the TOP Party or the Internet Party, both of which -

This column is part of a regular series for RNZ by graphic artist Toby Morris and journalist Toby Manhire.