Opinion - New Zealanders don't vote for a president, but for MPs and a party who choose their own leader.

One would think this ought to render the most "presidential" form of televised contest - the leaders debate - a bit of a dead letter in a parliamentary democracy such as ours.

One would think wrong. 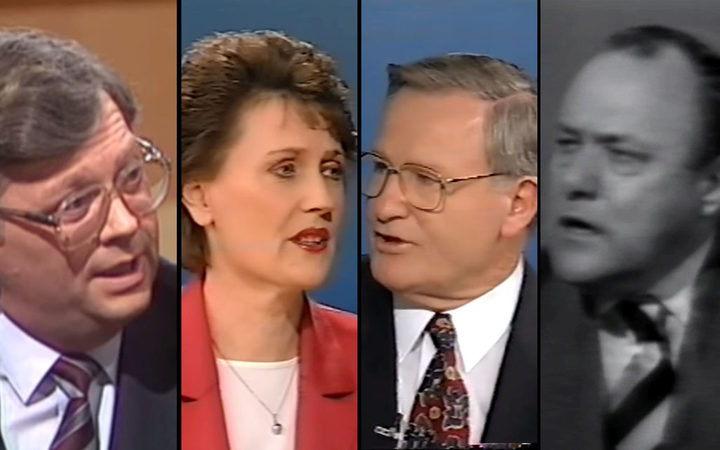 A random computer search through the country's election debates over the past 42 years only confirms the growing weight given contests such as the one scheduled to take place this evening in Christchurch.

It also throws up a good number of items worth revisiting for education or a laugh, along with past clashes that now look rather unwieldy and dull.

One of the most memorable early debates was one of the first, in 1975, pitting an impressive Robert Muldoon against a visually hapless Bill Rowling - or at least that's how it was for those watching.

In a sense, it was not unlike the first televised US presidential debate, in May 1960, between Richard Nixon and John Kennedy.

For those listening on radio, Mr Rowling might have done creditably well, but few seeing it on television would have doubted it was Mr Muldoon's night.

In the event, more people were obviously watching the discussion, with the 54-year-old opposition leader taking his party to a landslide victory.

While aspects of the skirmish now look quaint - not least the hairstyles and sartorial rig of the presenters, including a then-youthful David Beatson - the big issues of the 1975 clash also sound oddly contemporary in places.

Immigration loomed large in the discussion. So did a "housing crisis" in Auckland that Mr Muldoon repeatedly returned to.

A rather different Rob Muldoon - tired and grumpy, but still formidable enough - returned to the studio in 1984 to face David Lange.

It was here that Mr Muldoon uttered one of his most memorable lies: "I love you, Mr Lange".

This was to run a distant second to the now-highly questionable set of eloquent assertions made by Mr Lange about preserving the strength of trade unions, keeping the country inside the Anzus fold, and reinforcing the welfare state model.

The debate may have been a wash for the soon-to-be-defeated National leader, but it remains a triumph for public service broadcasting. There were no ads, for one thing. Moderator Ian Johnstone soothingly controlled the fray, but also stayed well outside it. Viewers certainly didn't leave their television sets feeling less acquainted with their candidates.

The earlier debate involving Rob Muldoon may also have been the only time respective leaders did not stumble over how to address their opponents. Participants simply addressed their remarks to Mr Chairman and left it at that. As the style became less formal over subsequent years, so did the confusion over courtesy titles.

An otherwise nicely moderated interlude between Helen Clark and Jim Bolger in 1996 had the National prime minister ricocheting between honorifics and the Labour leader's first name. (Not so Miss Clark, who basically sticks to reprimanding "Jim".)

Another big change, of course, has been the involvement of minor parties, about which much can be said, not much of it positive. The infamous debate from 2002 in which the televisual worm literally turned in favour of then United Future leader Peter Dunne remains a little painful to watch.

On the other hand, looking back through the footage, one is also struck by how much was lost by not having other party leaders in an event such as tomorrow night's debate on TVNZ 1.

Probably the biggest loser in this respect was the short-lived New Zealand Party, whose maverick leader, Bob Jones, would have been an intriguing studio opponent - as evidenced in a campaign clip from 1984 in which a heckler gets taken apart 10 minutes 15 seconds in on the third part of a documentary.

"Do you believe in strong leadership, mate," Mr Jones bellows from the stage. "Because I'm going to come down and give you some in a minute."

The guy in the crowd shouts something suitably rude back, and suddenly one is reminded that the greatest casualty of political confrontation as it has come to be seen in today's televised leaders' debates may in fact be not parliamentary democracy but the old-fashioned heckler.

David Cohen is a Wellington writer. As a journalist, he covered many past election campaigns for news outlets in New Zealand and abroad.