Housing, wages, tax and tactics were all points of contention as Bill English and Jacinda Ardern met for the second time in less than a week for a televised leaders debate. 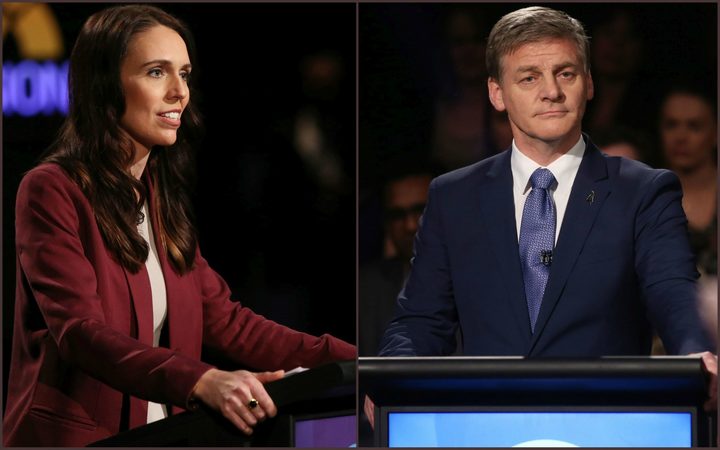 Ahead of the debate, Labour and National were at odds over Labour's alternative budget.

National said there was an $11 billion hole in the figures, primarily because Labour failed to roll out each year's operating allowances into subsequent years.

Labour was standing firmly by its plan, saying the numbers stacked up and had been independently checked.

See how the debate developed with RNZ's live blog here.

In tonight's debate, Mr English said the numbers didn't add up, while Ms Adern told him that was an absolute fiction.

When the debate turned to the impact of the economy on families, Ms Ardern highlighted the people who were missing out.

"Two thirds of Kiwis who got a payrise, it didn't keep pace with the cost of living. That's how people feel, they feel like they are going backwards and that's because they are."

Mr English, who had championed his record of productivity and wage growth, had a question.

"If you're worried about their pay, why put capital gains tax, higher income tax, petrol tax, that's not caring for their pay?" said Mr English.

Ms Ardern was quick to respond.

"We are not increasing any tax on wage and salary earners. That is patently false, that is scaremongering Bill, you've done it this whole campaign and I'm calling you on it."

The housing crisis was also a hot spot. The National Party leader cited the Christchurch rebuild as an example of his government's track record on building houses.

"So we know how to do this. The houses are coming. Thirty thousand first-home buyers have used Home Start. Another 60,000 will just over the next three years."

Ms Ardern said it was time for Labour to have a go.

"Bill, you know how to do this...You've had nine years of practice and we're in the position now where first home buyers are staring down the face of home ownership that's the worst it's been in 60 years."

After refusing to set targets to reduce child poverty, Mr English said the families package coming in to effect in April would lift 50,000 children out of poverty.

"I am committing to that," said Mr English.

But Mr English and Ms Ardern could not agree on exactly how many New Zealand children needed to be helped.

Ms Ardern said they would be aiming to lift at least 10 percent out of material deprivation.

"Even further than that when it comes to relative incomes," Ms Ardern said before Mr English interrupted, "that's way shorter than what I said."

She said her entire reason for being in politics was to rid New Zealand of child poverty.

They did agree on one aspect - that New Zealand First's Winston Peters required careful handling.