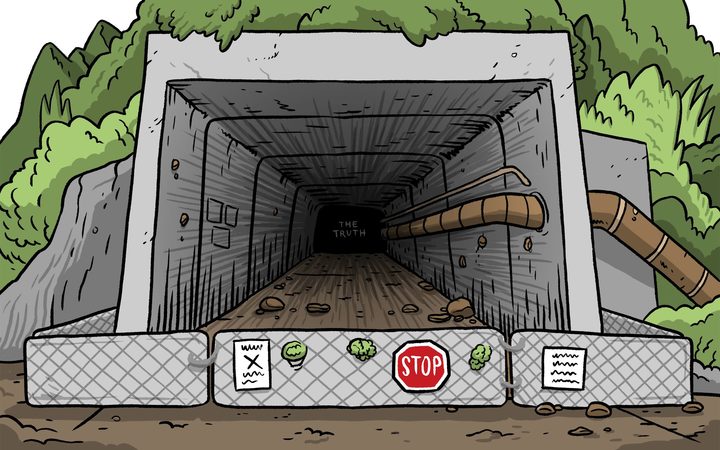 What would be the point in re-entering the Pike River mine?

Re-entry into the drift could provide greater clarity about the cause of the first explosion, which took place at 3.45pm on 19 November 2010 at the Pike River coal mine near Greymouth, and led to the death of 29 men in New Zealand's worst industrial disaster in a century. It may even be possible to retrieve some bodies.

What is the drift?

A drift is the passage or tunnel leading into a mine proper. In the case of Pike River it is 2.3km long.

And why is this back in headlines now?

It is back in headlines following the broadcast by Newshub of footage, dating from three months after the disaster but never screened publicly before, showing two men working on a robot just within the drift, and the robot travelling as far as 1.5km down the tunnel.

Is this footage new?

Sort of. The report said it had not been shown by police to bereaved families or released to the Royal Commission that investigated the disaster. The police and the Prime Minister say that it was shown to the families - most of whom are seeking a re-entry - in July 2011 and was made available to the Royal Commission. Family spokespeople insist, however, that they have not seen it before. 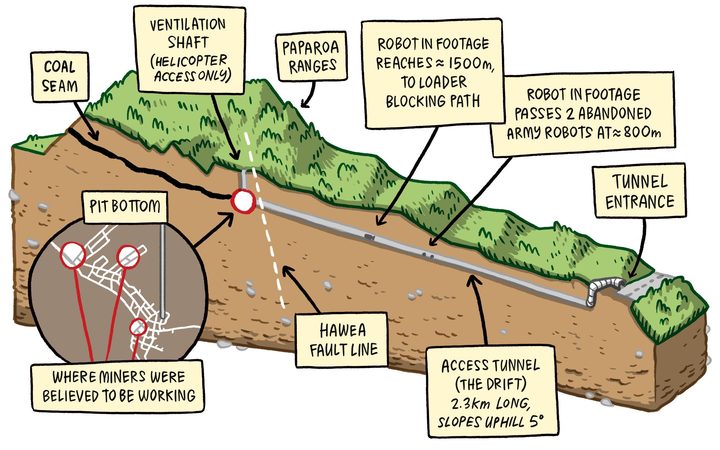 What difference could the footage make?

Some commentators say the Newshub story was misleading, "reckless" even. Advocates for re-entry, however, say it is important because it shows two rescue workers calmly working within the shaft, while the robot apparently overheats, emitting smoke or steam, yet there is no fire, which implies it is safer than stated.

The response from the PM has been that the two men were only metres within the drift, and that the shaft was pumped with nitrogen at the time, while now it is full of methane.

Why is methane a problem?

Methane is a by-product of coal mining, and when mixed with oxygen can prove explosive, as it did in Pike River. Methane explosions have caused more deaths than any other factor in the history of coal mining.

And it'd be madness to enter a tunnel full of methane?

Not necessarily, if you could keep oxygen out. But the most family's favoured plan - described by the vice-chair of the UN Group of Experts on Coal Mine Methane, Dr David Creedy, as "ultra-cautious", and which came close to getting sign-off in 2013 - centres on again pumping nitrogen into the drift, which would push the methane up through bore holes, then replacing the nitrogen in turn with fresh air.

Sounds good. Why not?

While some experts say the risk is sufficiently limited to warrant re-entry, the assessment of experts enlisted by Solid Energy remains that it is too risky.

Is it ever possible to eliminate risk?

What does Solid Energy have to do with it?

Solid Energy owns the mine, having purchased it from receivers in 2012.

So can't the PM tell them to re-enter?

Not necessarily. As the Prime Minister reiterated in Parliament on Tuesday, health and safety legislation introduced following the Pike River disaster meant that "for a politician to make a decision or instruct or force someone to enter that mine would be contrary to that law".

In any case, it would surely be hard to find anyone willing to go in there?

Among those who have volunteered to re-enter the drift are the government's own former chief mines inspector Tony Forster, and the two men who escaped the mine after the first explosion, Russell Smith and Daniel Rockhouse.

Yes, Winston Peters, 72, has also volunteered to head in.

Following a meeting with Bill English earlier this year, it was agreed that installation of a 30m-thick concrete seal would be suspended for the time being, and Solid Energy would explore the possibility of using an unmanned drone to explore the drift. 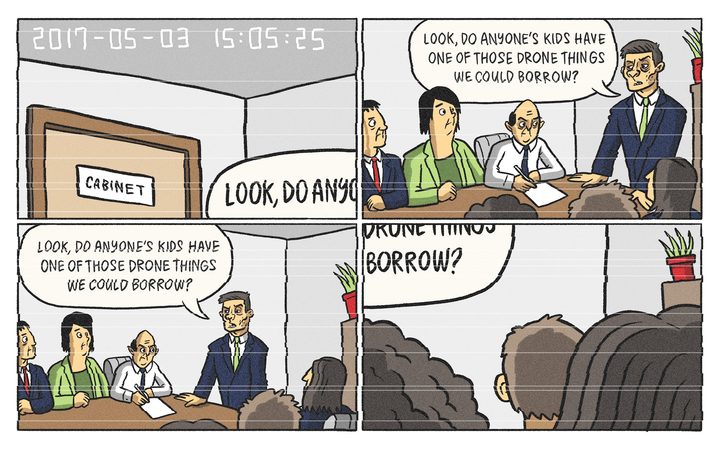 Sounds sensible. Why do the families remain so upset?

There's the death of their loved ones, that's quite upsetting. But they're also upset because the Royal Commission identified shameful failures from top to bottom, encompassing the Pike River operators, managers, regulators and government, yet no one has ever been properly held to account.

They're upset because of what the investigative journalist Rebecca Macfie, author of the most thorough account of what happened at Pike River, called a "collapse of trust" in dealings with authorities, which has only been exacerbated by the emergence of the video and materials coming to light only because of leaks.

They're upset, too, because they feel John Key's "absolute reassurance", in the former PM's own words, that "we're committed to getting the boys out, and nothing's going to change that", remains unfulfilled.

And this is the real reason John Key resigned!?

No. That will be exclusively revealed in a future Toby & Toby column.

This column is part of a regular series by graphic artist Toby Morris and journalist Toby Manhire.