With two planes being struck by lightning in New Zealand in recent days, although it's terrifying, how worried about it do we really need to be? 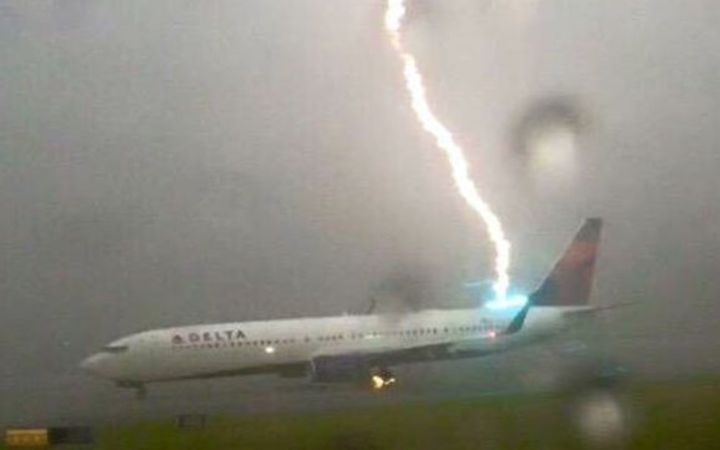 A plane being hit by lightning while on the tarmac at Atlanta Hartsfield Airport, Georgia, United States in 2015. Photo: Twitter / @GoldboxATL

For some of us, plane travel is a necessary but anxiety-inducing experience.

From take-off to cruising we silently monitor every sound for anything out of the ordinary.

Each change in engine pitch, weird new hum or knocking noise - let alone an unexpected beep - sends ice water into the belly and confirms a deep certainty that, this time, we're doomed.

Now imagine what it is like when out of nowhere comes a brilliant flash and a loud boom that shudders the aircraft.

Luke Fitzmaurice was on the flight from Wellington to Dunedin on Sunday that was hit not long after take-off.

He described seeing a large bright flash outside the window accompanied by a bang that shook the plane.

The aircraft was diverted to Christchurch to be checked over by engineers and the passengers took another plane to Dunedin.

But just how likely is it that your plane will receive a bolt from the blue, and how worried should you be if it does?

The Civil Aviation Authority (CAA) said in the past five years it has received 162 reports of lightning striking planes - 48 overseas and 114 in New Zealand - with no injuries or deaths.

It said there were about 250,000 flights each year, making that roughly one reported lightning strike for every 7700 flights - a rate of about 32 strikes a year.

And Scientific American reports that, on average, every plane in a commercial fleet is hit by lightning more than once a year.

Although strikes are not uncommon, there are actually very few recent instances where lightning has caused a plane crash.

In 2014, a strike was blamed for the crash of a light aircraft in Indonesia that killed all four people on board

And in 2010, one person died of a heart attack and 114 others were injured when a Colombian passenger plane crashed short of the runway and split into three pieces after reportedly being stuck by lightning.

However, in these case, aeronautical specialists have said lightning was likely just a factor rather than the solo cause of the crash.

Massey University Aviation School chief executive Ashok Poduval said he has only been struck by lightning once while flying in his 25 years as a pilot.

He was flying a 48-seater plane when it was hit and crew members and passengers described seeing, very briefly, a glowing electrical orb, he said.

Nobody was hurt and it caused no damage to the plane.

In fact, he said pilots were much more concerned with the storms that generated lightning rather than the lightning itself.

Light aircraft pilots tried to avoid storms at all costs if possible because they get tossed around so much, Mr Poduval said.

"A thunderstorm itself can cause a light aircraft to crash."

Planes designed with lightning in mind

Air New Zealand said aircraft were designed to dissipate the electrical energy from a lightning strike back into the atmosphere with very little to no effect to the aircraft - and none to the passengers.

When lightning strikes a plane it tends to hit an extremity - a wing or the nose - and run along the exterior "skin" of the plane before exiting at another extremity via specifically-designed static dischargers.

And modern improvements in the design and the composite material used to make modern aircraft makes them very safe.

Air New Zealand said if a plane did get hit by lightning it was checked over by engineers before being allowed to return to the air.

Very occasionally, a rivet or static discharger was burned out and required replacement, it said.

So, as long as you are feeling sufficiently reassured, feel free to check out this terrifying, but beautiful, video, which appears to show the phenomenon in action.