First Person - After Chiefs players were accused of behaving inappropriately towards a woman they hired to perform at their 'Mad Monday' celebration, a sex worker asks New Zealanders to remember strippers are human. 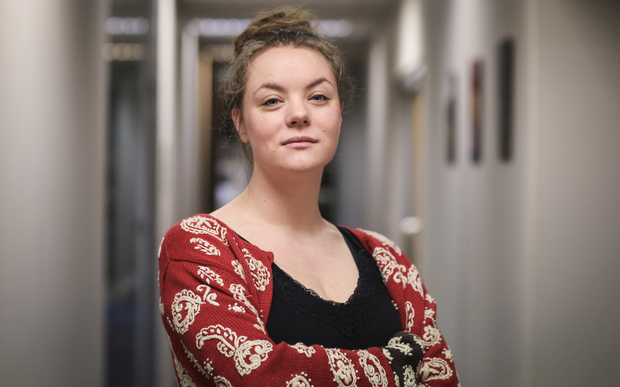 "I know so many amazing women doing incredible things, who also happen to be strippers" - Hadassah Grace Photo: RNZ/Rebekah Parsons-King

Us strippers are getting pretty tired.

It's not the aches and pains that come from traipsing around in 7-inch heels, staying up 'til the early hours. It's not the emotional fatigue that comes from maintaining witty banter, pretty posture, and perfect hair while counselling some poor soul through his mid-life crisis or marriage woes.

This is the bone-weary exhaustion that comes from constantly having to remind people that we are, in fact, people. Whole human beings with the same right to respect, safety, and bodily autonomy as everyone else. But every day, in a thousand little ways, people try to tell us we're not.

It's rude to ask a doctor or lawyer how much money they make. You don't tell your therapist that you'll only pay them if they go on a date with you, and you don't ask bartenders what went wrong in their lives for them to end up there. No one sits down in a restaurant, orders only water and expects the staff to talk to them for hours without spending a penny. Plenty of people do these things to sex workers. And, of course, when we're abused, assaulted, raped, murdered, or harassed, we're told we brought it on ourselves for choosing this job in the first place.

I started stripping because I was dealing with some health problems that made a regular nine-five difficult to manage, and I wanted more time to write. Since then I've been published in New Zealand and overseas, organised successful fundraisers for charities like Wellington Women's Refuge and Rape Crisis and written pieces that have gone viral and shaped the nation's dialogue on issues like gender politics, domestic violence and rape and sexual assault. I'm also a campaign writer for Justin Lester, one of Wellington's mayoral candidates.

None of those things would have been possible for me without the sex industry. Yet countless New Zealanders think I contribute less to society than men who run around in the mud wearing tiny shorts for a living.

I know so many amazing women doing incredible things, who also happen to be strippers.

Lisa* is a support worker and a counsellor. She has a master's degree, and wants to be a clinical psychologist.

Cara* works in aged and disabled care and is studying. A student allowance barely covered her rent and after 35 hours on minimum wage paying secondary tax she was struggling to pay the bills. She loves the women she works with, and dancing gives her a break from work, study, and two children.

Mary* works 35 hours at a retail job in an upmarket store on Lambton Quay, but the pay is barely enough to live off. She says the women she works with feel like family, and when customers are respectful she loves providing a service that's appreciated.

Lola* just loves dancing. She works in education during the day, and is studying towards her master's degree, but says stripping is excellent for broadening her scope outside academia.

See? We may be more than averagely attractive and willing to take our clothes off for money, but we're still just people and we'd like to be treated that way.