Police Commissioner Mike Bush once described Arthur Taylor as "a criminal with no moral or social conscience". RNZ reporter Kate Newton was granted a rare interview with the career crook who claims he's now on the right side of justice. She found Taylor, who's been a thorn in the side of police for decades, brazen and unapologetic. 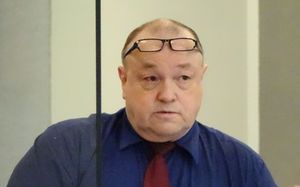 There are many Arthurian legends.

There's the time, in 1998, when Arthur Taylor and several others - including murderer Graeme Burton - busted out of Auckland Prison and holed up in a millionaire's Coromandel bach, where they stacked the fridge with expensive red wine pilfered from the cellar.

There's the time in 2005 when, in the throes of another escape, Arthur Taylor fell through a ceiling panel in a downtown Wellington building and landed on top of a startled woman in a toilet cubicle.

There's the time - at least Taylor claims it's true - that he smuggled his own sperm out of prison and fathered a daughter, who's now eight years old and has a "leadership personality", her proud dad says.

After spending 38 of the last 44 years in prison, amassing 152 convictions along the way for fraud, burglary, aggravated robbery, kidnapping, firearms offences, drugs offences and escaping from custody, he's built up a certain mystique.

"He's a very clever man. He's also a very dangerous man," was all one Crown prosecutor would say.

Previously intent on flouting the law, these days Taylor claims to be crusading on behalf of his fellow prisoners, which must gnaw at prison authorities.

Arthur William Taylor turns 60 this year. He's currently serving out a 17-year cumulative sentence in the high-security A Block at Paremoremo and will be released in 2022 if he isn't granted parole earlier.

Put in Epuni Boys' Home when he was 11, his criminal career began at age 16 when he was convicted for forging entries in his Post Office Savings Bank deposit book. His career as a self-styled "jailhouse lawyer" goes back nearly as far, to the early 80s.

It's been largely self-serving - he's represented himself to seek reductions in his sentences, get convictions quashed, or get his security classification downgraded.

But recently, he's developed a bent for human rights, starting with two successful challenges to Corrections' decision to ban smoking in prisons. It did not have the desired effect - Parliament simply legislated to make the ban lawful.

By then Taylor had his next target in sight: a bill passed in 2010 that banned all sentenced prisoners from voting. The High Court's Justice Ellis ruled she could not overturn the ban because it had been lawfully passed by Parliament. But in her judgement she described the law as "constitutionally objectionable", and wrote that Taylor was "not some vexatious voice in the wilderness" on the issue.

Then, in July last year, Taylor achieved something that no one has previously managed to do: he gained a declaration from a New Zealand court that a law - in this case, the voting ban - was inconsistent with the Bill of Rights Act.

Now Taylor's on a propaganda blitz. Late last year, the Court of Appeal ruled that Corrections should not have refused a request from TVNZ to interview him. In response, the department has recently relented to several media requests to speak to him, including one RNZ news made back in October 2014.

On the day we talk, via an audio-visual link, he comes into the room blustering about the humidity and demanding a fan before he'll let things get underway. He's joking with the prison guard who's brought him in: "Let's say you've broken down on the side of the road. Who would you rather came along - me, or Graeme Burton?"

He's in an olive-green t-shirt with paint-smeared blue overalls on top, having just come from his morning prison work, and he speaks in a not-quite shout, with a rising inflection.

Previously, our contact has been via email - a mostly one-way stream of correspondence from an account he gets a mate on the outside to operate for him. The emails include administrative matters ("sorry, my secretary got the dates wrong"), third person statements in the style of press releases ("Arthur Taylor said he is delighted by today's Decision by Justice Paul Heath…") and commentary on how his cases are progressing.

Some are so brash they read like satire: "The Kiwi dollar is being dumped - falling over 5 percent as panic gripped the foreign exchange markets in the past week, since the Helensville Electoral Petition hearing started making the news."

He happily admits most of his cases have been to further his own ends. "When I was taking criminal cases it was to try and keep myself from getting convicted...look after myself and stuff."

Now, other things have assumed more significance, he says. "I like to help people and I was helping the wrong people I guess, but now I can help the right people. I can help make some important changes, hopefully, so that's what motivates me now."

Is he really that interested in any human rights beyond his own, though?

The pair first met in 1981, when Taylor was a forensic patient at Oakley Hospital in Auckland, and Dr Newbold was the hospital's recreation assistant.

"For him, these kinds of challenges are like a mountain for a mountain climber - they look at a mountain and they climb it because it's there," Dr Newbold says.

"He's playing a clever game of chess with the authorities and enjoying his victories. He gets a big kick out of that."

That glee is never far from the surface. In one email, Taylor relished the possibility of being able to cross-examine Corrections Northern Regional Manager Jeanette Burns: "If I can question her, I know Burns will 'crumble' in the witness box."

He does like the mental manoeuvring, he says. "You probably realise, I haven't got the greatest of people to bounce ideas off in here, so when I'm in a courtroom and I'm clashing with the best legal minds in the country, it sort of reminds you that, hey, you can do it."

He also started getting feedback from the legal fraternity about his cases.

In a little red contact book he's got numbers for QCs and other lawyers he's come across over the years, some of whom send him legal textbooks and other research material. "I was really honoured to have these people's recognition...What happened is I started to feel more affinity to them than most of the people in here."

The legal cost to the taxpayer of Arthur Taylor's mental stimulation is around the $450,000 mark. He's completely unapologetic about that.

If Corrections did not cut corners, or if the Crown's lawyers were more competent, he would never have taken his cases, he says.

No, he hasn't used his time inside to study for a law degree, he says - there's no point. "The first thing a lawyer's gotta pass if he wants to get a practising certificate, he's got to get the Law Society to give him what's called a character certificate - and I can't get that, obviously, because of my past."

What he does want to do upon release is set up shop as some kind of consultant or adviser. "See, I've built up a great deal of experience. I actually have lawyers ring me for advice on specific areas of particularly corrections law, so I have got that expertise and I think I want to put it to the benefit of other people."

He envisages himself acting as a kind of translator; an emissary shuttling between the grungy world of prison and the rarefied formality of court.

Only lawyers who hold a practising certificate can represent someone in court or give clients legal advice about how they should pursue a particular case.

But ex-lawyer Barry Hart, who defended Taylor at one point before he was struck off in 2012, reckons there's plenty his former client could still do, if he was that way inclined. "His knowledge and ability to comprehend the law is better than a lot of lawyers I know - in selected areas, I might add.

"If [Taylor] had an opportunity where he felt he was wanted, accepted, in a group of supportive people, I think he kind of would [succeed]."

Taylor told the New Zealand Herald in 2001 that he'd "had enough" but three years later he was back in prison.

Taylor is "almost suicidal" about his own freedom, Greg Newbold says. "When he took off with Burton and the others … he was almost out at that point - he only had a few months to go, maybe even weeks.

"He ended up doing a heap more time. It's almost as if he's trying to get back to jail."

But Dr Newbold suspects Taylor, who was already in his late forties when he was jailed this time around, is slowing down. "If he could get his teeth into something when he gets out, he'll be fine. And I think he's probably getting sick of jail, because really it is a young man's place."

The people who talk about Arthur Taylor and his motives tend to be the people who like him. The ones who don't won't have a bar of it. 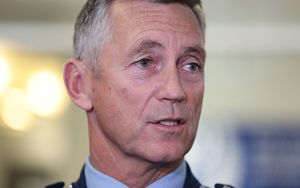 RNZ's requests to talk to the Police Commissioner Mike Bush, who led the operation to arrest Taylor, Burton and the other fugitives in 1998, went ignored.

Corrections, too, turned down interview requests, although the department did email through a written statement citing a description the manager of Auckland Prison gave to the High Court in 2013.

Then, Tom Sherlock said Taylor was unpredictable and volatile, and could appear "calm and in control one minute then swing into disorderly, threatening, or violent behaviour the next".

Taylor himself isn't much interested in what Corrections or the Police think of him and his renewed promises to make good.

"I tell you one person that won't take it seriously and that's Mike Bush. But I can only tell you what I can tell you - I know myself, what's in my heart … I can't do anything more really. The proof will be in the pudding, won't it?"