New Zealand's meat and dairy products bound for overseas shores often have stickers slapped on them proudly proclaiming their origin.

This country also advertised itself as "100 Percent Pure".

Does dairy have a 'problem that needs fixing'? Photo: RNZ / Alexander Robertson

The animal welfare group SAFE countered that slogan when it placed an advert in The Guardian in Britain, claiming New Zealand's dairy industry was "contaminated with cruelty".

So what lies behind the rhetoric when it comes to the way New Zealand treats farm animals?

That question was sparked by the undercover footage released by SAFE and fellow animal welfare group Farmwatch, showing bobby calves being mistreated by farm workers.

The footage prompted some public outrage for two reasons.

First, the treatment of the animals was universally condemned, including by most farmers.

Second, it also revealed an uncomfortable truth - which might have been a surprise to most townies - that calves are taken away from their mothers when they are only days old. 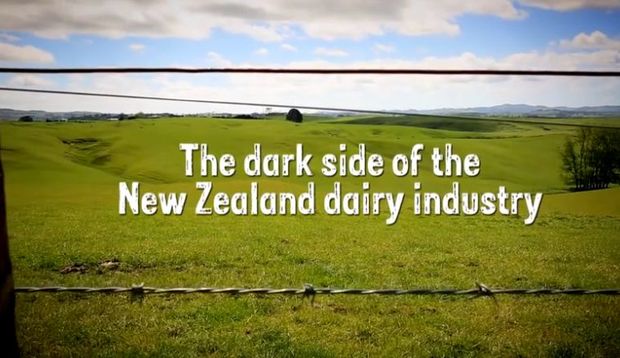 A screengrab from the SAFE video Photo: SAFE

Cows can only produce milk if they have had a calf but they cannot keep them.

An urbanite drinking their latte in a Ponsonby cafe might not want to think about that sort of detail when they are reading the paper before work.

"The images were very violent and sort of a very casual violent," she said. "They were just trying to get on with their job as quickly as they could and they weren't actually stopping to think that these were newborn baby animals that were vulnerable and frightened."

Ms Mathers said the Ministry for Primary Industries (MPI) was not doing its job and she wants more inspectors and more resources for MPI.

She has called for Minister for Primary Industries Nathan Guy to sit down with industry players to make sure proactive monitoring was in place rather than relying on a complaint process.

Ms Mathers had a message for Mr Guy: "Don't be defensive, be proactive. Get on with it. There's a problem here that needs fixing."

But the government was not impressed with SAFE's way of bringing the mistreatment of the calves to international attention.

Mr Key said that was neither fair or appropriate and the tragedy was that the vast bulk of farmers "care deeply" about their animals and animal welfare issues.

He said image was very important and the ad did put New Zealand's reputation at risk.

But that was precisely why SAFE placed the advert in The Guardian in Britain rather than in the New Zealand Herald.

It argued the government ignored domestic pressure and only responded quickly to worries about animal welfare when they gained international attention.

While the government and industry might not like the way SAFE has publicised the issue, it did seem to have prompted some action.

Seven dairy industry groups, including DairyNZ, the Meat Industry Association and Federated Farmers, joined MPI in planning a strategy to stop the mistreatment of bobby calves.

"We're dealing with just a couple of rogue operators and unfortunately that's tarnished some of the dairy industry."

He pointed out that New Zealand was only recently ranked first equal by global charity World Animal Protection for its animal welfare regulatory system.

Mr Guy echoed Mr Key's comments, stressing that most farmers cared about the welfare of their animals and had been upset by the footage and Guardian advert.

He said there had been a social media backlash by thousands of farmers who felt very frustrated by the coverage.

There had to be some balance in the discussion, he said.

Of course, there will always be an uncomfortable unease between animal welfare groups and farming. Dairy is a multi-billion dollar industry and there's a lot at stake.

Animal welfare advocates want better treatment of animals. While the government relies on dairy to help keep the economy in shape. So, the question is whether these parties can manage to meet in the middle to keep both sides happy or at least make an uneasy truce.