The first sections of a new council-led subdivision in Gore are about to hit the market as demand for housing soars. 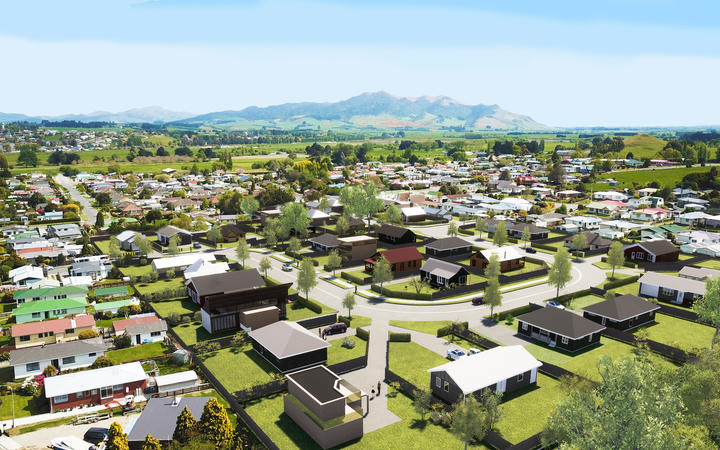 A visualisation of Matai Ridge subdivision in Gore. Photo: Supplied

The Gore District Council's Matai Ridge subdivision was aimed to fill a substantial gap in the town's housing and land markets.

The joint venture with Wilson Contractors would see 35 sections developed on the East Gore site with 15 sections ready to be released this week.

Gore District Mayor Tracy Hicks said the demand for housing in Gore was more significant now than it had ever been.

"I've had some of our biggest employers say they can't attract staff because there's no housing and a shortage of residential sections," he said in a statement.

He was pleased the subdivision got a green light, saying it was a show of confidence in the future growth of the district.

"It's exciting. We haven't had a subdivision of this scale since the 1980s."

The council decided to put the project on the backburner back in 2018.

But Hicks said the timing had not been right and the real estate market was now considerably more bullish.

To date, the council had contributed about $1.15 million to the joint venture.

The council's chief executive, Stephen Parry, said the revenue would be shared in proportion to the financial contribution of each party.

"We bring to the table the market value of the land, detailed engineering designs, resource consent and marketing among other things."

Wilson Contractor chief executive Steve Osborne said the company first got on board in 2017.

"We are happy that soon we can finally turn dirt."