Lax Otago landowners will soon have to foot the bill if the regional council has to step in and deal with their rabbit problems. 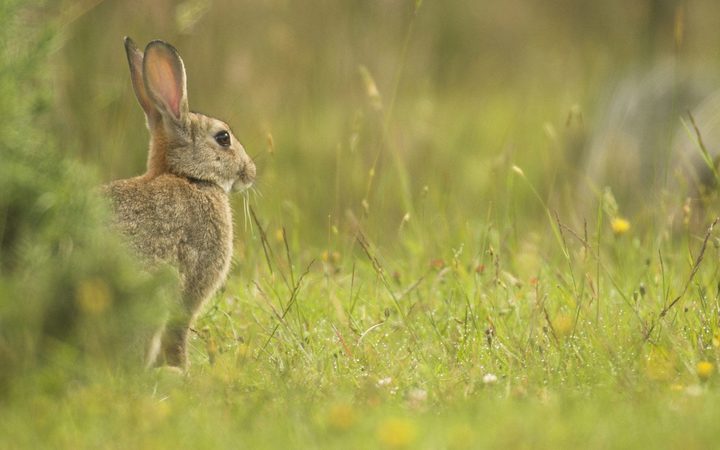 The Otago Regional Council has been ramping up its campaign against rabbits by adding more money to their pest management budget, boosting staff numbers and compliance plans, and improving community collaborations and education.

On the ground, some farmers were facing rabbit populations numbering many thousands.

Andrew Paterson has a lot of rabbits on his high country farm, Matakanui Station, about 25 minutes north of Alexandra.

"If you have a couple of good shooters and they go in there for the weekend, they can easily shoot 600 rabbits so there's a fairly high concentration and that's even with them being gun-shy, shy of people coming in and out."

Next door, rabbits have ringbarked all of their neighbour's bushes, killing them off.

They were spreading into Paterson's lucerne paddocks - fortunately that was not as big an issue this year when the feed was outgrowing them.

"But it's in the years when you are tight for feed and you know that you're feeding thousands or hundreds of thousands more mouths that it's an issue. We want to be able to push them back into that area, that bad area, and keep them there until we get to the point where we can either shoot them or poison them properly."

He has recently purchased about two and a half kilometres of rabbit netting fencing he planned to install next year.

The Otago Regional Council did close to 80 property inspections between July and October, with 41 percent deemed non-compliant.

Its environmental implementation manager Andrea Howard - who oversees biosecurity at the council - and said they had upped their game in the past year, becoming more proactive as a regulator and educator than they've been before.

"We give those properties a period of X amount of months, depending what time of the year it is and if those properties do not undertake any work and they do not reduce their rabbit populations, we will then go on to the next stage which is ORC engaging a contractor to undertake that work and charging the occupier of that land.

"So that's our formal compliance process."

The council would start issuing enforcement notices to non-compliant properties within the next couple of weeks, she said.

The initial tranche involved about 25 large-scale, rural properties that had been deemed non-compliant after two inspections.

"People have had ample opportunity to respond and they - for whatever reason - possibly just need something firmer from us so that's what we'll be doing and over time we will prioritise again based on other things like biodiversity values and where the communities are active.

"We can't do everything everywhere, but we will certainly be fulfilling our regulatory role."

Rabbits had also become more visible as the land use changed and urban areas expanded into previously more rural land, she said.

"That's enabled us to get a whole different range of skill sets in the team as well as increasing the number of biosecurity officers that we have out there engaging with large and small properties."

A budget boost was helping them to educate and support more communities to tackle the rabbits, she said.

"We've got seven communities that we're currently either working with or about to work with so that includes Lake Hayes, Albert Town, Gibbston, Otago Peninsula, Queenberry, Moeraki and Hidden Hills.

"There will be more but they are the main concentration of where the community is very concerned and has been asking for assistance and where our compliance and general surveillance has shown there are issues."

Ida Valley Station owner Callum Paterson said they had worked hard to get their rabbit population down with poisoning and employing a full time rabbit shooter, calling the work "an insurance policy".

"We don't want plague proportions of rabbits which economically really take a toll. You basically have to reduce your stock in numbers, it's very hard to generate enough income to actually tackle the major problem of the rabbits after that so it's a very slippery slope."