The hills are alive - with rabbits 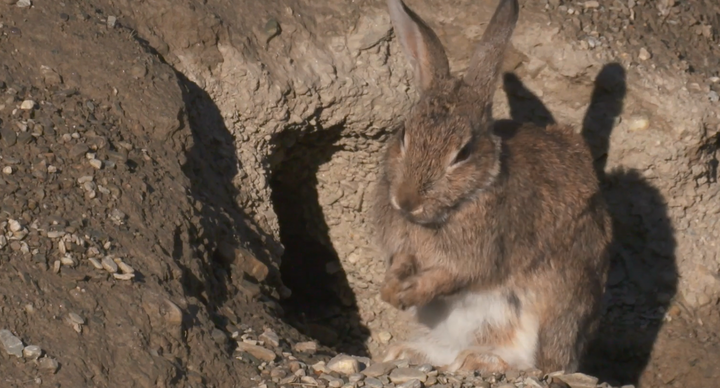 One of the rabbits in the cast of thousands in Newsroom's 'Apocalypse Down' series. Photo: screenshot / Newsroom

You stop in wide open country, drinking in the views of Otago hill country.

Then you realise those hills are moving.

“I think you’ve got to see it to believe it,” says Melanie Reid, “because you always hear like the ‘wave of rabbits’ or ‘the hillside moving’, but when you stand there and it’s actually happening in front of your eyes it’s quite hard to comprehend. It’s quite hard to believe. And we’re back there again.”

Reid is the editor of Newsroom Investigates, and is rolling out a series on the plague of rabbits hitting not just Otago, but swathes of small towns in the South Island and some in the North Island too.

“They’re like these giant mowing machines,” she tells The Detail today.

Seven rabbits eat as much grass as one sheep.

“What they do is they eat all the grass, and then they live underneath. So they decimate it on top and below. The best way to explain it, is that it becomes like a honeycomb. And that’s what they talk about when people fall … they walk along and they go down to their knees, or their tractors go down and they sink. And they actually change the PH of the soil. So not only do they eat all the grass, but what I think is underestimated, is how long it takes for that land to recover.”

It means dry areas like Central Otago risk being turned into dust bowls.

And rabbits will do anything to survive. They’ve climbed on the backs of sheep to get away from flooding; eaten the ears off other rabbits when food is scarce; scurried up ‘rabbit-proof’ fences to get away hunters.

In 1997 when farmers took matters into their own hands and introduced calicivirus from Australia it worked – wiping out an estimated 80 percent of rabbits.

“It was very effective. It feels as though in some parts people have relaxed a bit and had a bit of breathing space and haven’t kept vigilant control of the rabbits … and there’s been no real enforcement. So here we are 24 years later and the rabbits seem to have some sort of immunity to that virus now and so they’re away again.

The Otago Regional Council has been concentrating on pastoral land and says large parts of that are under control but admits there are plenty of ‘hot spots’ where there are major issues.

The rapid expansion of lifestyle blocks and subdivisions around places such as Queenstown and Lake Hayes, make it harder to act – shooting and poisoning is not possible when your neighbour is close by.

Reid talks today about what her investigation found about efforts to solve the problem, and calls for a coordinated effort from everyone who has a stake in controlling rabbity – or the country will see a worsening of an ecological disaster that already costs a conservative $75 million a year.