An immunologist says proper checks are needed ahead of children's Covid-19 vaccine rollout, while police and iwi to work together on Northland checkpoints. 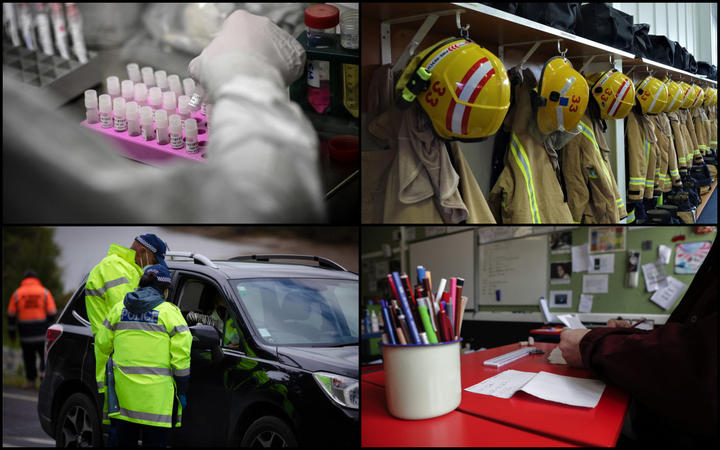 There were 172 new community cases of Covid-19 in New Zealand today.

In a statement, the Ministry of Health said the new community cases were in Northland, Auckland, Waikato, Bay of Plenty, Lakes and the Nelson/Tasman region.

Early this evening it was revealed there were three cases of Covid-19 in New Plymouth. The district health board says two are children and are all from the same household, with a known link to an existing case in Rotorua.

There were no additional cases to report today in Hawke's Bay, Taranaki, Wairarapa, Wellington or Canterbury.

There were 10 new cases in Nelson/Tasman today - including one that will be officially added to tomorrow's figures - this takes the number of active cases in the region to 14.

The ministry said these cases are made up of two clusters, with 11 in one and three in the other. "A possible connection between the two clusters is being investigated."

Two schools in Nelson - Enner Glynn School and Broadgreen Intermediate - have had cases. Both schools have temporarily closed while close contacts are identified.

The ministry said 117 of today's new cases are yet to be linked.

There were 86 cases in hospital, including nine in intensive care. The average age of the patients in hospital is 45.

There were also two cases in managed isolation today.

The ministry said there have now been 8745 cases in the current community outbreak and 11,525 since the pandemic began.

Covid-19 Response Minister Chris Hipkins said yesterday he expected advice from Medsafe in a couple of weeks and the rollout should start in late January.

But some are urging officials to move faster as a number of schools shut down for days because of infected students or staff.

University of Otago immunologist Dianne Sika-Paotonu told Morning Report while many would have preferred an earlier rollout, it was important to note proper checks are needed.

"This does take time... In New Zealand we do have layers to be worked through, and this includes Medsafe, the government's technical advisory group, but also Cabinet, so we need to be ready and prepared," Dr Sika-Paotonu said.

"Things did change with the Delta variant ... which showed a definitive shift from those within the older age bracket to the younger individuals actually becoming more seriously unwell, ending up being hospitalised, and dying from Covid-19," she said.

"The research took time because the clinical trials that were initiated began in adults.

"So proper tests and data and evidence needs to be made available to ensure the appropriate safety checks can be undertaken to give approvals after meeting really high standards."

Officials had no plans yet to pull the timeframe forward for the vaccination of children, but it was still under advice, Director-General of Health Ashley Bloomfield said.

There are enough vaccines to do this whole population group, Bloomfield said, but they would make a big effort to vaccinate Māori and Pasifika tamariki early.

"The key reason for that is they tend to live in bigger households. And we know that household size does have a real impact on kids being infected inside the house."

Dr Sika-Paotonu agreed that those who were more vulnerable and compromised should be prioritised.

Of the current Delta outbreak, 20 percent of cases were aged nine years and under.

The union said the mistake showed up shortcomings in decision-making by FENZ's top-heavy bureaucracy.

Police and iwi to set up Northland checkpoints

Police are working with iwi in Northland to manage checkpoints after 15 December when the borders around Auckland reopen to ensure that those travelling from Auckland meet the new requirements.

In a statement Police Commissioner Andrew Coster said people can expect to be stopped and spoken to by police to ensure they are abiding by the requirements of the Public Health Order.

"With the support of iwi, police will set up and manage checkpoints to confirm that those travelling from Auckland meet the requirements," he said.

He said this means travellers into the region will need to show proof of vaccination status or a negative Covid-19 test.

Coster referred people to the rules for travelling under the red and orange settings on the Unite Against Covid-19 website.

"Police will have a low tolerance for people attempting to travel north without meeting the requirements," he said.

Coster said the community's efforts are making a difference and wants everyone to do their best in adjusting to the new system.

Rhythm and Vines postponed until Easter 2022

Rhythm and Vines will not go ahead over the New Year's holiday period this year. The music festival, which was due to be held from 28-31 December in Gisborne, will now be held across Easter weekend 2022.

The festival attracts about 30,000 people a year to the Tairāwhiti region.

Tairāwhiti currently had the second lowest fully-vaccinated rate, at 77 percent.

Festival organisers say the decision to postpone was made in consultation with Tairāwhiti Iwi, Tairāwhiti DHB, local councils and members of parliament.

It took into account that Gisborne would be in the red setting of the new traffic light system at least until 13 December, they said.

Festival director Kieran Spillane told Checkpoint it was very likely Gisborne wouldn't get to the orange setting until at least early next year.

WHO expecting new information on Omicron, US reports first case

The World Health Organisation expects to have more information on the transmissibility of the new Omicron variant of the coronavirus within days, technical lead on Covid-19 Maria van Kerkhove said.

That was faster than the "weeks" the WHO had predicted last week that it would take to assess the data available on the variant after designating it a "variant of concern", its highest rating.

Whether the variant is more transmissible or evades vaccines are some of the major questions that still need answering.

Vaccine developers have said it will take about two weeks to assess whether their shots are effective against it.

Van Kerkhove said one possible scenario was that the new variant, which was first reported in southern Africa, may be more transmissible than the dominant Delta variant. She said it was not yet known if Omicron makes people more ill.

WHO chief scientist Soumya Swaminathan said the agency believed the existing Covid-19 vaccines will work against the variant.

First reported a week ago, Omicron has spread to more than a dozen countries, spooking financial markets. Governments have responded by reintroducing some travel restrictions.

Today, the United States identified its first known case of the new variant, discovered in a fully vaccinated patient who traveled to South Africa.

The ministry said responses from 94 percent of schools indicated nearly 98 percent of teachers and 95 percent of other staff were vaccinated.

Official figures showed there were 62,600 teachers working in state and state integrated schools, last year and a further 9000 relief teachers so a vaccination rate of nearly 98 percent would translate to more than 1400 unvaccinated teachers.

The ministry warned that its figures were not definitive.

Te Tai Tokerau had the lowest reported vaccination rates at 93 percent, indicating the region had about 100 teachers refusing the jabs.

Almost 100 firefighters cannot go to emergency callouts due to the Covid-19 vaccination mandate.

Fire and Emergency New Zealand (FENZ) on Tuesday extended this to trainers and trainees.

"They have got it wrong because they haven't done the due process," Watson said.

"You can't just start issuing instructions that affect people who turn up to work and can't undertake their normal duties."

South Island councils are split on whether to let unvaccinated people into their facilities.

Most of the large east coast ones are requiring a vaccine pass to enter libraries, pools and museums, but none of the three West Coast councils will be using them.

Some of the mainland's largest councils, Christchurch, Timaru and Dunedin, had the strictest rules.

If you did not have the vaccine, you would be able to ride the bus or take a load to the dump, but that would be it.

All these places were fast closing in on achieving a 90 percent vaccination rate.

However on the West Coast, where vaccine uptake had been the slowest of anywhere in the South Island, the welcome mat would largely remain out for the unvaccinated.

All three councils would allow entry to their facilities on the basis they were public buildings.