In the Auckland District Health Board area, 96.2 percent of eligible people have had at least one dose of the Covid-19 vaccine. 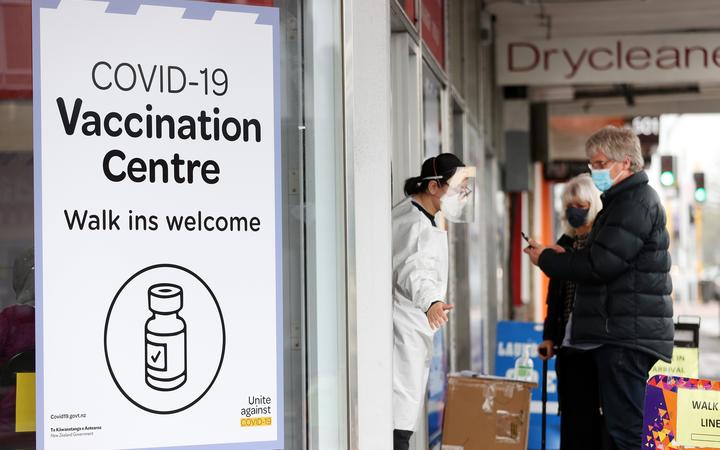 People walk up to a vaccination centre on Dominion Rd, Balmoral in Auckland. Photo: 2021 Getty Images

It is the highest rate in the country and smashing vaccination expectations.

University of Auckland epidemiologist Rod Jackson said the rate should be the new national benchmark - and matched by second doses as soon as possible.

He said everyone who doesn't like Aucklanders "should see if they can do better than Auckland".

Auckland DHB was also on track to be the first in the country where 90 percent of Māori have had at least one dose.

It was just 292 people short of that goal yesterday.

There were three district health boards in the city - Auckland, which covered central and eastern areas, Counties Manukau, covering the south, and Waitematā, the north and the west.

Nationally, the next highest district health boards were Capital and Coast and Canterbury, both on 95.3 percent for first doses.

Professor Jackson said the challenge was now to get the rest of the country up as high as Auckland - or higher.

Australia's capital Canberra was on 98 percent.

"Let's aim to beat Canberra ... that should be our goal," Jackson said.

While it was great news, the worry was that there were still pockets of unvaccinated people, both in the city and around the country, he said.

He said because those under 12 could not yet be immunised, that left room for the virus to spread.

In the Auckland DHB area, 92 percent of people were fully vaccinated, in Counties Manukau 87 percent and in Waitematā 89 percent.

Nationally there were 92 percent of people with at least one dose and 86 percent fully vaxxed, but rates varied greatly between DHBs and among Māori.