A man who lost his mother in the crash on Mount Erebus says protests of the proposed memorial are deeply upsetting and tarnish the occasion.

Today is the 42nd anniversary of the plane crash in Antarctica, in which 257 people on board were killed.

A memorial in Auckland's Parnell Gardens was being built, but some nearby residents said they didn't want something 'sad' in the park.

In February, protesters occupied the proposed memorial site and prevented work from starting for over 200 days.

The protests were led by Māori community leader Dame Rangimarie Naida Glavish, who says the site is culturally significant and has nothing to do with the Erebus disaster.

However, mana whenua Ngāti Whātua Ōrākei had expressed its full support for the memorial and detailed its extensive involvement in the process. 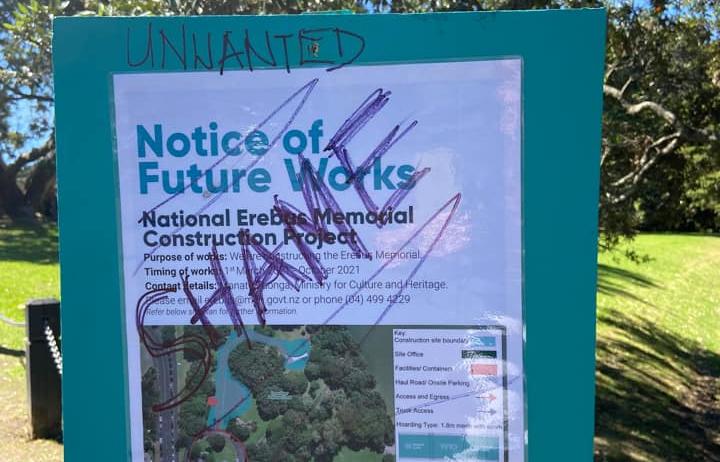 A defaced sign announcing the commencement of construction of the Erebus memorial in a Parnell park. Photo: Save Robbies Park / Facebook

David Ling, who lost his mother in the crash, said he had experienced 40 years of difficulty and trauma.

He said the protestors had exacerbated that, and their actions may further hurt the families.

"One of the things I will be thinking about is I dread what antics they may get up to further upset the families," he said

Ling said his mother used to visit the gardens.

All 257 people on board were killed, leaving their families and an entire nation bereft.