A group of Parnell residents may glamp on the site of a planned national Erebus memorial in an attempt to stop construction, which begins next week. 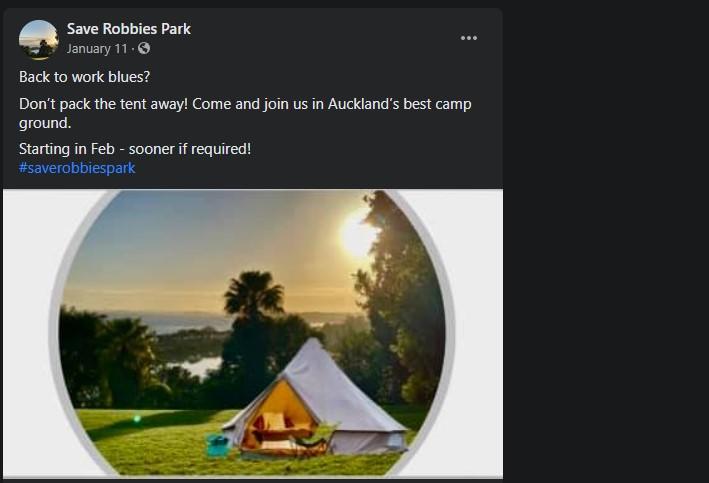 The construction of the memorial in a section of Dove-Myer Robinson Park, better known as the Parnell Rose Gardens, comes more than 40 years after Air New Zealand flight 901 crashed into Mt Erebus in Antarctica on 28 November, 1979, killing all 257 on board.

It will honour those who died in the tragedy, as well as the people involved in the recovery of their bodies from the mountain.

But last month, the Save Robbies Park group posted a picture of a glamping-style tent on the lawn where the memorial is to be built along with a message that read: "Back to work blues? Don't pack the tent away! Come and join us in Auckland's best camp ground. Starting in Feb - sooner if required!" 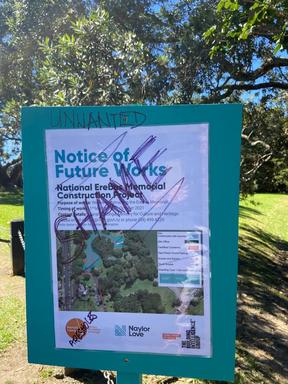 "This structure has no place on this site. Future Aucklanders need this land preserved. The history, both European and Maori has completely been overlooked by the very people who are meant to protect it. There are other more meaningful places that can housed [sic] Erebus Memorial and they need to start looking into them. Besides - who doesn't like camping!"

"No one is giving up in the fight to save this special space", the post read.

Later in the day, the group posted a photograph, which appeared to have been taken from behind a tree, showing a group of men standing on the lawn.

Another photo showing that a sign in the park announcing the commencement of work had been defaced was also posted on the Facebook page.

Save Robbies Park spokesperson Jo Malcolm is yet to respond to RNZ's request for comment.

The 945sqm lawn in a section of Parnell's Dove-Myer Robinson Park was selected for the location of the memorial back in 2018.

But landowner consent to build the memorial was delayed - in part due to strong opposition from some residents of the affluent Auckland suburb who said the memorial would "destroy" the park.

In November 2020, the Waitematā Local Board voted four to three in favour of granting landowner consent after nearly six hours of debate. 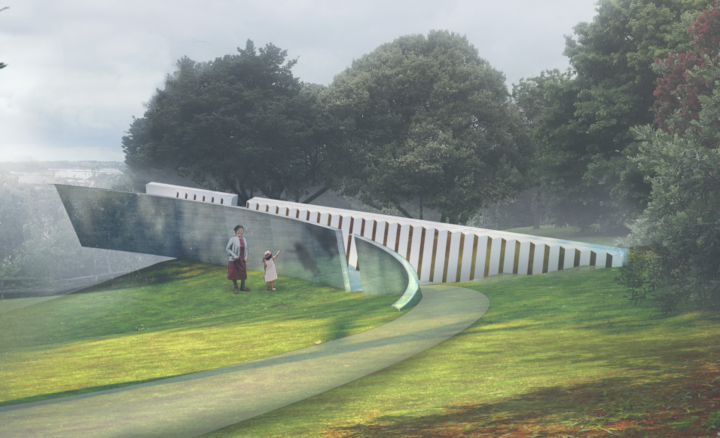 Meanwhile, another group was recently established to oppose the memorial.

Auckland man Paul Baragwanath has been quoted in the Hobson magazine as a member of the group, called the Mataherehere-Taurarua working group. It's unclear what action the group will take to stop construction of the memorial.

The group appears to be named after Mataherehere pā, which was located at the end of a headland that extended from the present park area into the Waitematā Harbour, but was destroyed in the early 1900s to make way for the construction of railway lines and Tamaki Drive. Taurarua is the area also known as Judges Bay.

It is unclear who other members of the group are, or if any of them whakapapa to the Marutūāhu iwi collective, which has ties to the Parnell area.

A spokesman for the iwi collective told RNZ he did not know who the other members of the working group were, but said Baragwanath did not whakapapa to iwi in the collective.

The Ngāti Whātua Orākei Trust has supported the use of the site for the memorial since 2018, and is not associated with Baragwanath's group, a spokesman for the Trust said.

"I understand he is approaching individuals within Ngāti Whātua Orākei and in the wider Ngāti Whātua iwi to seek their support", the spokesman said.

Baragwanath is yet to respond to RNZ's request for comment.

The Ministry for Arts, Culture and Heritage would not say if Baragwanath's Mataherehere-Taurarua working group, or any other group had made any legal attempt to stop the memorial being built at the Parnell location.

According to the Ministry, construction at the site will take about six months, with site set-up beginning next week.