A review of firefighting at a big South Auckland warehouse blaze says asbestos floated up to 1km away from the site. 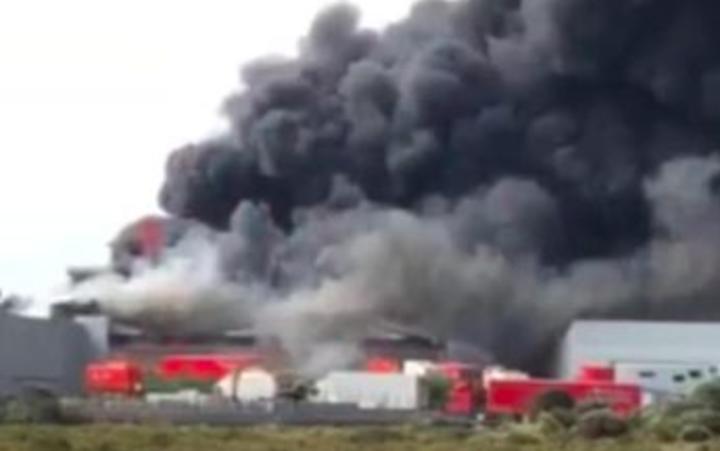 It also shows 22 fire trucks were not decontaminated and may have carried hazardous asbestos back to their fire stations.

Fire and Emergency (FENZ) is defending itself against union claims it has poor asbestos handling that exposes staff to risk.

Union health and safety reps attempted to lodge a safety notice in Auckland, but this has been rejected by FENZ and is being fought over by lawyers, according to the Professional Firefighters' Union.

The agency released two internal reviews to RNZ under the OIA, of fires in the last two years where shortcomings over asbestos came to light.

The one on the Takanini warehouse fire in December 2019, repeatedly notes there "is currently no policy or procedure for the decontaminating of appliances".

It shows WorkSafe told FENZ it was worried about "fire appliances leaving the scene without being washed down therefore, possibly carrying asbestos and other products back to fire stations".

FENZ maintains it is currently compliant with the law, but at the same time is updating its risk management documentation because it is out of step with 2016 changes to strengthen health and safety laws.

At Takanini, an asbestos roof covering the 4000sqm warehouse collapsed early on in the fire that razed the large building.

FENZ commanders at the time said the asbestos, which they'd been warned was there - would not travel far, and not outside the cordoned area. Hoses sprayed a mist of water mist to try to contain it.

However, the review said Crown safety agency WorkSafe "reported that asbestos particles had drifted up to 1km from the incident".

It shows FENZ did not tell the public to close their windows till two hours after they were called to the fire at 4.30pm. There is uncertainty over what agency would best be responsible for public warnings about air quality at fires.

At one stage some firefighters removed their breathing masks prior to decontamination despite asbestos hazard warnings.

"Decontaminating PPE at the incident and the communication of the hazard to other personnel on the fire ground was not to the standard expected," the second OIA review said.

Police were not warned about the asbestos straight away, and fire investigators did not find out till the next day.

Health and safety laws demand that where there's any risk of inhaling asbestos, access to a site must be restricted, PPE provided and decontamination occur.

Firefighters decontaminated themselves properly at Takanini, the review said.

The Professional Firefighters' Union claims contamination back at stations is just one of many threats from Fenz not training staff properly on asbestos under the stricter laws and regulations that came in five years ago.

A third review, at a factory in Onehunga in 2019, reported on previously by RNZ, found fire trucks returned to stations heavily contaminated with asbestos.

One was so dirty it had to be steamcleaned inside, and the reviewers warned FENZ: "This and similar future events highlight the need to actively manage post-fire decontamination more rigorously. PPE, equipment, and appliances need to be decontaminated before leaving the incident ground to reduce any chance of unwanted products being transferred."

The conflict between FENZ and the union has come to a head following the Ponsonby Intermediate school fire a year ago.

Though this fire released asbestos across the inner Auckland neighbourhood, forcing the evacuation of some houses for weeks, FENZ did not do an operational review. In its OIA response, it said it had instead done a "hot debrief" straight after the fire. RNZ has requested details of that debrief.

Decontamination of firefighters was "in line with best particulate suppression practices", Fenz said.

It is updating how it deals with asbestos using a model developed in Australia for dealing with carcinogens.

Auckland regional public health has not released to RNZ details of the outcome of a debrief of the Ponsonby fire, which the service had said it would be part of to see what could be improved.

It says it is too busy due to the pandemic.

Public health has said it relies on FENZ as the lead agency. However, the inquiry into Sky City convention centre fire made clear prior to the Ponsonby fire that FENZ is not responsible under its legal mandate for monitoring air quality or alerting the public when it is bad, even though the public might expect it to be.

However, it says it responded anyway, telling the health and safety rep it takes management of asbestos "extremely seriously", that it meets legal requirements, and that "work is being done to ensure we are up-to-date with all industry requirements".

"We have clear procedures for both the identification and decontamination of asbestos."