A group of Afghans fearing for their lives because of help their relatives gave to New Zealand's defence forces could soon be able to come here. 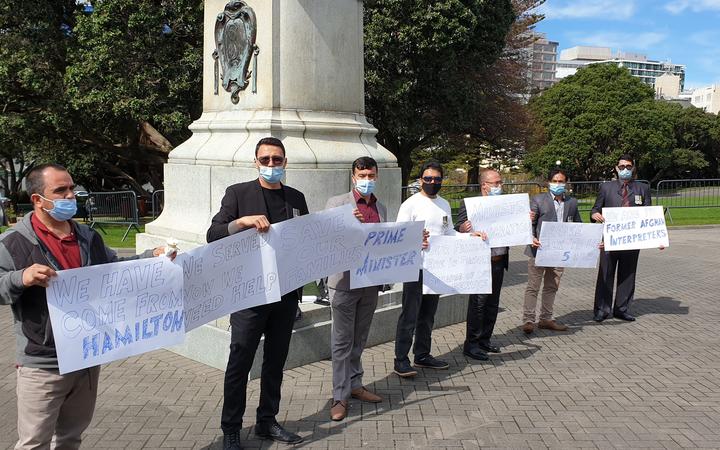 A group of interpreters drove to the Capital from Hamilton and stood outside Parliament in September. Photo: RNZ / Jane Patterson

It follows a High Court ruling that Immigration New Zealand was wrong to stop processing their visa applications due to Covid 19 and not making an exception on humanitarian grounds.

The ruling came after a judicial review by Community Law on behalf of more than 70 Afghans who applied for residence visas before last year's lockdown.

It said the rules in place at the time the applications were made must stand and that applying new ones, such as restrictions on who could come in to the country due to Covid 19, fell outside the law.

A New Zealand based cousin of one of the Afghans said she had almost given up hope the action would succeed.

Mena, the name she wished to go by to protect her cousin's identity, said as a Hazara, her life was in peril, as this group was regularly targeted by the Taliban.

"She's not living in very good condition at the moment, she's keeping moving. So after every two or three days she keeps moving to different houses and she believes she's going to be safer like that."

Mena said as a teacher, her cousin was doubly hated by the Taliban.

"The Taliban doesn't want a woman to get out of the house, they literally don't want women to have any human rights, they just want them to be like a servant and just stay at home."

While there was no guarantee they would be granted visas, the ruling did mean their applications would have to be considered.

Diamond Kazimi, a former interpreter for the defence forces in Afghanistan, now living here, said that would be a huge relief for this group.

"It's considerably more urgent because of the situation and the circumstances that they're living in. And, you know, they're living under the Taliban regime where they can't go outside and go to school. For women in particular, it's just the situation on the ground is so volatile that this really is going to help them to come to New Zealand for a better life, better education, and to be safe."

Diamond Kazimi was continuing to advocate for former colleagues and family members in Afghanistan who he said were being hunted by the Taliban, some because of their association with him.

This would have implications for anybody seeking a visa on humanitarian grounds, she said.

"They were applying a criteria that the humanitarian grounds had to exist here in New Zealand, rather than in the country that they're trying to escape from. The judge found that that was wrong. So that has significant implications for the number of people who now would be eligible under that criteria."

Sue Moroney, said so far Foreign Affairs and Trade had helped 700 Afghans to escape the Taliban, but she contrasted its approach to that taken by Immigration New Zealand.

"They've actually been meeting with us twice a week so that we can all work on that really complicated picture of getting people out of Afghanistan under really challenging circumstances. So that's a real success story and I think a substantially better process and therefore outcomes, than working with Immigration New Zealand."

For its part, Immigration New Zealand said it was reviewing the judgement and considering its implications.