A shark expert is calling on the Department of Conservation to approve his research permit, so that he can investigate the increasing numbers of great white sharks in the Bay of Plenty. 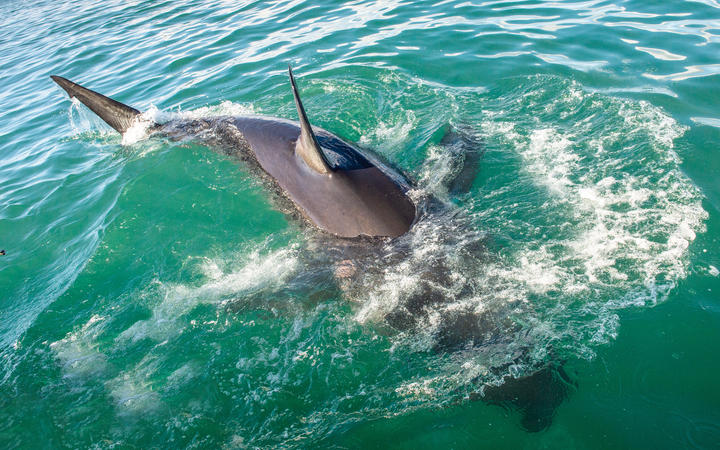 After an hour's drive from Tauranga next to endless orchards hugging the coastline, you will find yourself in sleepy Bowentown.

It is a holiday destination just down the road from Waihi Beach, with a surf beach on one side and the harbour on the other.

Self-proclaimed shark expert Riley Elliot said he fielded calls from locals who had sighted great whites and said it would only increase as city slickers make their way to the beach for the summer.

"There is going to be a million people heading towards places like Tauranga, Mount Maunganui, Waihi, and the greater Coromandel Bay of Plenty region which seems to be the hot spot for these great whites at the moment," Elliot said.

"For me there is a fear that without information, without research, without knowledge given to the public, people might unknowingly step into the sharks domain where we did not previously expect great whites to be."

There were most definitely "more" shark sightings due to phones, Elliot said.

Elliot applied for a permit to research the behaviours of the sharks in December 2021, and to ascertain if there were more sharks in the area.

The Department of Conservation website states it takes 20 working days for the permit to be approved - Elliot is still waiting 11 months later.

"Locals down there are staring to see great whites as they go and recreate on the ocean more and that is most definitely only going to increase as more people.

"I can almost see the Jaws movie start to unfold and unless we get ahead of these things and give people information we can run into tragedies for both people and for sharks."

In January, 19-year-old Kaelah Marlow from Hamilton was attacked by a shark in Bowentown. She was dragged from the water where she died from her injuries.

Elliot believed it was a Great White responsible for the attack.

He stated, just like anyone, sharks sometimes make mistakes.

It was the number of shark attacks that happen in New Zealand that prove this, he said.

Down at the harbours edge, locals weren't so phased about the prospect of coming across a shark while enjoying the water.

One woman enjoyed swimming at Anzac Bay, almost every day.

"I have been coming here for over 30 years and I have never seen a shark in here yet. Yes they say they see them but they're out past the buoys I am sure.

"I am more worried about jetskiers than sharks, I'll tell you that."

Enjoying his day off with a fish on his kayak was Frank.

He said he had seen a few sharks in his time on the water, but nothing that made him think there were more sharks than usual.

"There have always been sharks, its just what it is, I think people are just more aware of it.

"Don't put signs here [to warn swimmers]. Do we put a sign up to warn people they might get wet? Or don't drink it, it is salty?"

Barry, a regular fisherman in Bowentown said coming across sharks in the water was to be expected.

"I've been fishing this harbour for as long as I can remember and there has always been sharks in there.

"There is always sharks in the harbour, you have to be aware. There are a few more boats around that see more, I don't know, but I did see several great whites last year."

"There is going to be a million really deservingly desperate kiwis that just want to go and enjoy summer and they shouldn't have to deal with the fear of the unknown in this harbour."

The Department of Conservation has been approached for comment in relation to Elliot's permit application.