The Waitangi Tribunal has found the Crown has failed to meet its Treaty obligations as part of protecting Māori interests in parts of the Comprehensive and Progressive Agreement for Trans-Pacific Partnership (CPTPP) - but acknowledges major changes in the negotiation process. 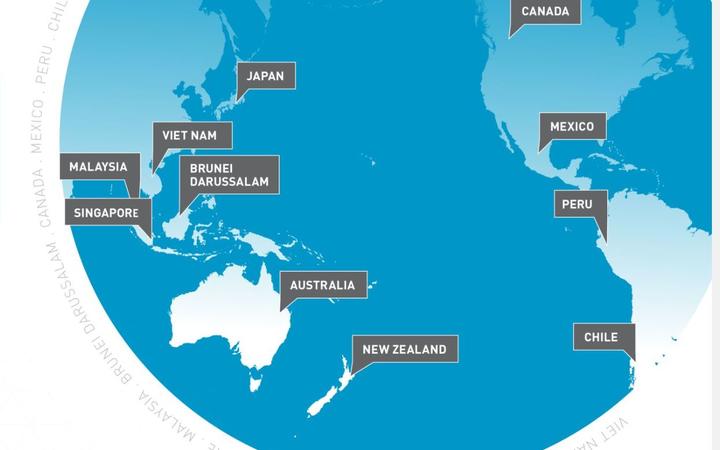 It is the final stage of the inquiry into claims concerning the Trans Pacific Partnership (TPP), which started in 2016.

The revised TPP - now known as the CPTPP - is a free trade agreement involving New Zealand and 10 other countries in the Asia Pacific region.

Opponents of the 11-nation trade deal said the protection of Māori tikanga, knowledge and sovereignty needed to be ensured.

Originally, the issues for the final stage of the inquiry included the Crown's engagement with Māori over the TPP and the CPTPP, and the secrecy of those negotiations. The issues of engagement and secrecy were eventually resolved through mediation.

However, the remaining issue concerned the e-commerce provisions of the CPTPP and data sovereignty.

The tribunal found risks to Māori interests arising from the e-commerce provisions are significant, and that reliance on the exceptions to mitigate that risk falls short of the Crown's duty of active protection and as a result the Crown has failed to meet the Treaty standard of active protection and this failure constitutes breaches in regards to principle of partnership.

As the breach arose as a result of the way the Crown settled its e-commerce mandate for the TPPA/CPTPP, the tribunal's assessment was the reactive or passive position is insufficient because governance of the digital domain has important implications for the integrity of the taonga that is mātauranga Māori.

"Mātauranga Māori is at the heart of Māori identity it is not an interest or consideration readily amenable to some form of balancing exercise when set against other trade objectives, or the interests of other citizens and sectors," the tribunal said.

In terms of its recommendations, after considering what it could advise in order to avoid these issues in the future and to remove prejudice it came to the conclusion that it would not be appropriate to make recommendations in particular circumstances of this case largely due to it being five years since the inquiry began, there have been major changes in the Crown's position in response to the claims.

These shifts include evolving government policy in response to other tribunal reports such as Ko Aotearoa Tēnei and Te Pae Tawhiti.

Other changes during the process include the work of a Māori advisory body, Te Taumata, which was established after the tribunal issued its first report in 2016 and more recently, the establishment of Ngā Toki Whakarururanga as a result of the mediation agreement.

Having carefully considered the relief sought by the claimants, the tribunal declined to recommend that further e-commerce negotiations be suspended until an effective or proper regime has been designed.

In light of not making recommendations, the tribunal agreed a need for a comprehensive review of Aotearoa's wider policy settings that affect digital trade and for now the government should avoid locking the country into any fixed negotiating positions.

The tribunal referenced the example of the recent Agreement in Principle between the United Kingdom and New Zealand, which includes a chapter on indigenous trade, as indicative of what is possible without freezing international negotiations altogether.

The tribunal acknowledges that there will be challenges ahead but it sees these matters as best left for negotiation and dialogue between te Tiriti/the Treaty partners in good faith with the processes now in place.

"Vindication, with high expectations that Māori will at last be able to protect our Tiriti rights in international trade agreements". That is one of the claimants, Moana Maniapoto's, response to the Tribunal's findings.

mātauranga Māori and that mātauranga is a taonga. Which puts a heightened duty on the Crown to actively protect those rights, interests and kaitiaki responsibilities under Te Tiriti.

Maniapoto stresses the urgency of a positive response from the Crown.

"The TPPA claim has taken five years, and we have waited another a year for this report. Meanwhile, the Crown has continued negotiating free trade deals with the United Kingdom, European Union and World Trade Organization along the lines of the TPPA/CPTPP. We want to see those texts and have effective input on them so we can properly protect our

"We also agree with the Tribunal that the Crown needs to give priority to developing, with Māori, Tiriti-compliant policies and laws on Māori data sovereignty and governance, and

regulation of the digital domain, before it enters into any more similar agreements."

She said however, the Tribunal seems to think much more is happening on that front than we see on the ground and states domestic processes are moving very slowly, while free trade agreements move much faster and in secret.

Maniapoto acknowledges that the Crown, through Ministry of Foreign Affairs and Trade officials, says it is committed to change. But there is little evidence of substantive change, she said.

"We've had enough talk and promises. We want to see a real difference in how these agreements are negotiated and how our rights are protected, including a seat at the negotiating table so we no longer have to rely on the understanding and goodwill of the Crown - something this report shows was lacking."

"At the same time, we want domestic policies that mean we don't have to keep fighting these rearguard actions just to keep the policy space open," Maniapoto said.