Legislation allowing at least three houses to be built on one section is likely to "significantly increase" in demolition waste to landfill. 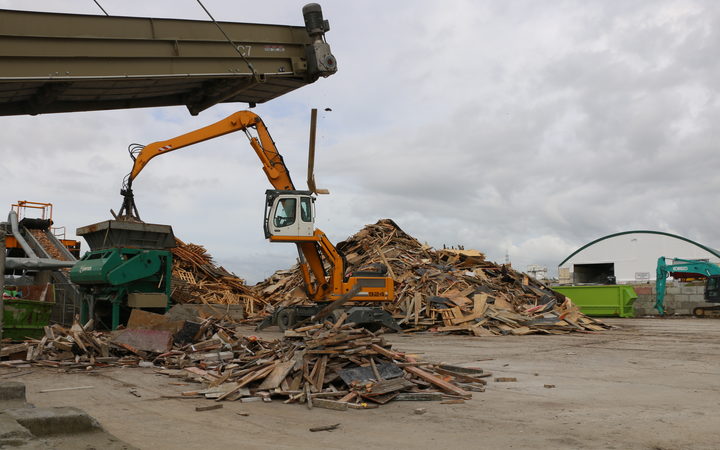 But the government is in the dark about just how much and is under fire on efforts to deal with it.

It launched the housing intensification bill - officially the Resource Management (Enabling Housing Supply and Other Matters) Amendment Bill - by saying it tackled climate change by fast-tracking much more housing near transport links. The bill is now before a select committee.

But what about other climate impacts?

If your neighbour pulls down their house to build three new ones, where will the waste go?

There is little evidence the government has thought this through, even though construction and demolition waste is a huge contributor to landfills and has been ramping up for years.

Councils are having to think about it now, since the bill took them by surprise late last month.

Some, like booming Waipa district in Waikato's mayor Jim Mylchreest, are alarmed at what they see coming, and what's missing.

"We're in a high-growth area and the proposition ... is obviously going to create more demolition material," Mylchreest said.

"Where to get rid of this material? At the moment, of course, it's just going straight to landfill. There's just nowhere in the Waikato region for the material to be taken to ... It's not economic to run recycling facilities."

Under the changes, sections in residential zones would have to allow at least three dwellings and three storeys except where there is a "compelling reason" to not intensify, such as heritage or natural hazard reasons.

Government reports indicate many thousands of houses could be pulled down, and up to 105,000 new ones being built within eight years.

These reports do not mention waste.

Asked by RNZ about it, the Ministry for the Environment (MFE) replied: "We have not calculated what extra demolition activity there might be, and how much extra waste might be generated".

This is despite two out of three possible building plans that MFE has put forward showing the existing house is gone.

Minister for the Environment David Parker did not seek advice on the bill's impact on waste -in part, he said, because it was difficult to estimate the volumes, and because councils did not consider such waste when enabling development under district plans.

Mylchreest saw no sign of help coming - climate change promises at Glasgow notwithstanding.

"We're all in favour of housing intensification. But it's got to be in a properly planned way. It's just a complete vacuum," he said.

"The speed in which some of these Bills are going through at the moment with no research or contact with local government beforehand that actually know what the problems are ...

"I just cannot believe that anybody has [not] done any research on what the impacts are going to be ... It's just crazy."

RNZ approached the 14 councils that come under the bill, which encompass most major population centres.

Waimakariri District Council is urging the ministry to immediately look into the waste issues.

Porirua City Council is among those doing waste recalculations, in its case, for when its Spicer landfill might fill up.

Its manager of waste and water David Down was already facing a 10 percent jump in waste coming from a big Kainga Ora state housing development.

"We're frantically trying to work in these new rules," Down said.

"We have a number of other very large developments on the horizon. So, suffice to say we're under pressure anyway. And this we assume will make it worse."

A host of documents about the bill have been released.

The government's regulatory impact statement on the housing intensification bill does not mention demolition waste - though it asserts that overall environmental impacts will be low.

Its cost-benefit analysis briefly mentions four environmental impacts, but does not mention waste.

A three-bedroom house creates 50 tonnes of demolition waste - 20 tonnes of cleanfill such as crushed concrete and 30 tonnes organic such as timber.

New Zealand Demolition and Asbestos Association president Helina Stil expected the amount that was dumped would jump under the new rules.

"That will significantly increase - I would say twofold bare minimum," Stil said.

"I don't think that the nation is really in a good position to be able to handle that."

Companies had looked at options for recycling the waste from state houses being demolished in Auckland but in many cases it did not work out.

"We even tried giving the stuff to Pasifika churches for shipping to the islands, but there is only so much you can do of that."

The industry's 1500 workers were hard-pressed as it was, without all the extra work.

Stil echoed Down when he said the government continued to treat landfills as if they were a "bottomless pit".

Successive governments had not followed through on mandates for recycling a percentage of demolition waste, or ensuring public contracts properly compensated demolition companies for the extra work and time and gear needed to salvage house materials, or on establishing a market for the recycled products, such as biofuel plants to burn them, she said.

"They entice contractors with sheer volume, but the costs are driven down so much, that it does make it generally inefficient and unviable commercially, for contractors to be able to do all of those nice things."

The Ministry of Housing and Urban Development told RNZ its "only observation" was that intensification might not produce waste if people split an existing house into three units, infill-built one or two extra houses, or relocated the existing house.

Stil said typically only 5 percent of houses could be relocated.

Two housing relocation companies told RNZ they did not have enough bare sections to move houses to and that regulations could sometimes stand in their way.

'Not the partner we need'

Down said it was "hardly surprising" the Ministry for the Environment had not calculated the waste impacts of the bill.

"It demonstrates the MFE's lack of awareness and understanding of the resulting waste output and its impact on the waste economy," Down said.

Local Government New Zealand deputy chief executive in charge of policy Jason Krupp said the waste issue showed how planning, funding and capacity building must be done together, not "piecemeal".

"We need urgent, joint up interventions now," he said.

Councils will not be left toothless by the bill.

The Wellington region's councils, and Hamilton City, for example, have new bylaws to force developments worth more than $2 million to produce waste management plans.

Hutt City Council said its focus was on setting up infrastructure to reduce waste going to landfill, though that was very complex.

"As there is currently very little diversion of C and D waste across the Wellington region, this points to significantly more work being needed for change," it said.

One plus for the funding of more recycling was the levy on dumping waste nationwide being hiked sixfold by 2024.

At present, the levy does not apply to construction and demolition waste. It is only paid at municipal landfills that take household waste, so misses 90 percent of what goes to landfill and though its scope is being expanded, that will take years.

A lot of waste goes to private landfills and there, the MFE admitted the data was very patchy - it was meant to be improving its data gathering - while Hutt City, and Christchurch City Council pointed to their own lack of influence on private operators.

"The difficulty for councils and for the ministry is that much of this waste generation and material flows occurs without the visibility of regulatory agencies," Christchurch said.

Given waste disposal was "not directly under the council's influence", it was not looking into the impacts of the intensification bill, it added.

The MFE pointed to a waste minimisation strategy it was currently consulting on and legislation due next year to show it was taking action.

It cited project grants, such as for Porirua's new recycling centre, expected to open in 2025.

It was "working to understand the full effect of the bill, particularly given it is not yet through the select committee stage", it told RNZ.

Upper Hutt City was doing the same "because MFE did not consult with councils on this, we are still in the process of analysing its likely impact".

The MFE said government agency Kainga Ora was leading the way on waste.

Until now the state housing agency's default had been demolition, as it worked to replace or do up 50,000 state houses.

However, it has now set a new target to divert 80 percent of the waste away from landfills and to relocate seven percent of homes.

The new housing promises to be more energy efficient than what it replaces.

Other arms of government, such as MBIE, are pushing for contractors to adopt "building for climate change" guidelines", for instance to meet a high Homestar rating on handling of construction waste.

The cost-benefit report says housing intensification has much lower cost impacts than the transport congestion that results from not doing it; and that "brownfields" development like this, has just a third of the cost impacts of "greenfields" building on city fringes.