With COP26 taking place, there's been a lot of talk about the government's pledge to halve Aotearoa's greenhouse gas emissions by 2030. 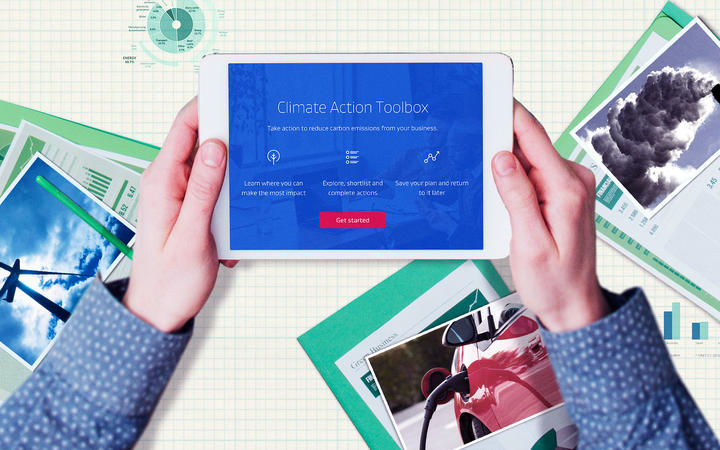 That pledge has come under fire, including criticism of it signing up to drastically slash methane emissions when environment groups say it has no plans to match the goal itself.

Cutting emissions doesn't have to be a government-led project. Your business can do it too - and make savings along the way, experts say.

COP26 has ended with agreement on a new global climate deal after a last minute change on coal, but where could you start and what could you do? RNZ is here to explain.

We're past the point of needing to explain why we all need to take climate action, but Sustainable Business Network climate programme manager Phil Jones says there are a few motivations for businesses to do so - including saving money.

"If you can use energy more efficiently, and you can cut down energy use, then obviously you get the benefit of lower costs.

"Secondly the interest level - the desire of people who work for businesses that are trying to do the right thing is increasing a lot.

"For example, we hosted a workshop (recently) and 80 percent said it's the right thing to do, and they were people in relatively senior positions within businesses of all different sizes, across all different sectors. So I think that's a really strong signal.

"They'll also be expected to do it through whatever government regulations there might be, but also increasingly what our key stakeholders are expecting.

"And customers are increasingly expecting businesses to take action, so that's another really hugely import stakeholder group that have increasing expectations."

So where can a business start?

One way is something Jones has been involved in creating - the Climate Action Toolbox.

"There's a huge range of businesses in terms of sizes, sectors and also the stage of what we call a climate action journey … We identified there was a real need for those starting out, particularly the smaller businesses."

With 97 percent of all New Zealand businesses defined as small or micro, according to the Ministry of Business, Innovation and Employment, they contribute about a quarter of the country's GDP.

Jones said that came with "probably an equivalent contribution to carbon emissions".

The biggest challenge for businesses is not knowing where to start - there can be so much information it can be off putting, Jones says.

The idea behind toolbox is to offer simple, practical ways for businesses to begin to understand their impacts and how they can minimise them.

The toolbox is a simple online self assessment which Jones says "literally does take a couple of minutes".

"But by finding out the type of workplace the business operates within … we can kind of prioritise or give ideas on priority action areas, broad action areas," Jones says.

The toolbox identifies five areas where a business can make change:

The tool can then recommend about 40 actions across those areas.

"It could be using existing vehicles more efficiently or it could be upgrading to electric and how you might go about doing that," Jones says

The toolbox also has a function for developing tailored plans by business.

"It's suitable for smaller businesses that don't have a lot of time or resources or don't know where to start initially in getting reliable information."

The toolbox was launched in March and has had more than 14,500 users.

What sort of action can businesses take?

"Broadly, there's two types of actions: They are making better use of what we currently have, whether that's vehicles or equipment or whatever it is," Jones says.

"Secondly, there is upgrading to cleaner versions. For example, electric vehicles, or efficient lighting.

"That's the broad types of actions we have across those five areas. Each … have a marker saying broadly how impactful they are - i.e. how much they help to reduce emissions."

The toolbox was designed to cover all industries and sectors to some degree, but doesn't go into much specialised content.

"The one (sector) that's least covered is agriculture - that's a bit more specialised."

Some action can make a difference faster, Jones says.

"The ones that are more about behaviour change can typically be introduced more quickly than obviously, those that require developing a business case and getting signed off and finance, etc.

"But every business I think could use the tool and get some ideas or immediate actions as well as ones a bit more involved."

Carrying out a full carbon footprint assessment case be off putting for many businesses, Jones says.

Doing it right is a fairly involved process involving some major accounting - we'll get into that soon.

The Carbon Action Toolbox is designed as an alternative to carbon accounting.

Jones says the aim is to get businesses to a point where they can understand their high impact areas and act on them.

"But for some businesses they do want to understand the numbers around their footprint, so we do provide some information on different carbon calculator options that are available because there are quite a number out there."

And actually counting how much you've reduced your carbon footprint is key, he says.

"It is critical, particularly when you're investing money obviously you need to show the return and those returns can be not just financially but also in terms of emissions reductions."

There are a range of carbon footprint calculators available, as well as options for becoming accredited or certified for your emissions reductions - or even carbon neutrality.

One organisation that offers services for full carbon footprint calculation and accreditation is Toitū Envirocare - it's non-profit and a subsidiary of Crown Research Institute Manaaki Whenua - Landcare Research.

It offers options from the high level - for businesses that are already carbon zero and want to go further - to options that don't involve auditing but instead provide a small businesses with a fair idea of their carbon footprint.

Toitū channel sales lead Delphine David says "What you need to measure when you get to your carbon footprint … are all your direct emissions - all your fuel, gas, refrigerants, diesel - then your energy usage - and then the rest is … all your transportation emissions".

There technical terms for the types of emissions - and there are others but those are the main ones, she says.

"Basically how it works is that we work from invoices. So whatever you pay, you are responsible for...

"Once you've identified all of that, what's very important as well for businesses is making sure that we get your organisational boundary right - so what exactly do you want to include or exclude from your carbon footprint.

"For businesses who are just starting the journey it's OK not to be perfect as long as you are very transparent about what to include or exclude.

"It's all very transparent because all of our members are required to publicly disclose them out on our website after this certification for the general public scrutiny."

However, some emissions are mandatory to include.

A carbon footprint works on a yearly measurement - whether it be financial or calendar.

"We need to have a full 12 months of activity to be able to start measuring a carbon footprint - it's basically about setting a base year."

Once all the emissions sources are identified, the information is entered into Toitū software and a carbon inventory report is produced.

Depending on how far a business wants to go, Toitū will ask for a plan to manage emissions reductions.

"This is where it gets very important because … if you really want to make a difference, then you need to really set up some plans and targets you know over the short term and long term and make sure that you achieve these."

Toitū can help with setting up those targets.

However, Toitū wouldn't give businesses specific actions - "we are auditing and certifying them, so we would be auditing our own work", David says.

Audits are carried out yearly to check in on emissions reductions.

Certification is more of an option for larger businesses, David says.

"But saying that, we have businesses with one person getting certified."

That said, Toitū will also certify a specific product - an increasingly popular option, especially for food and beverage, and also has an option specifically for farms.

Toitū aren't the only ones who offer climate or environment related certification.

A quick internet search brings up a range of options, including this list here from SBN.

"It's just about finding a couple (of actions) just to take the first step, get a bit of confidence, share the load of taking action.

"Don't expect perfection, get involved with your team as much as possible and over time do more."