Explainer - Sometime soon, the alert level system which is becoming increasingly complex, will be replaced with traffic lights. Join RNZ for a journey into the future to see what that means. 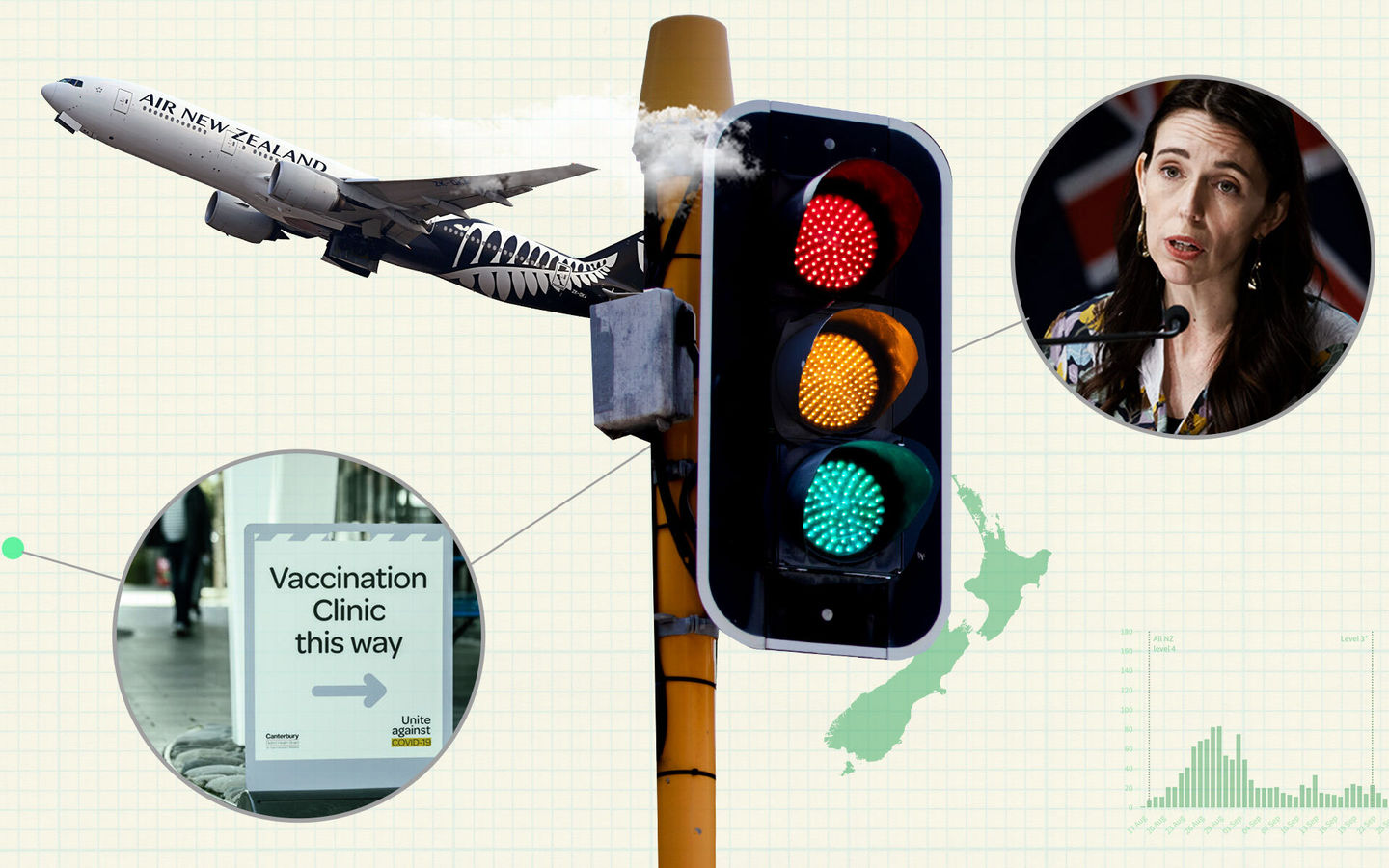 New Zealand's alert levels in particular seem to have been an effective tool, but have changed dramatically from what they once were - now including 2.5, Delta 2, and various steps down from alert level 3 to alert level 2.

However, with vaccinations promising to change the way New Zealand responds to the pandemic, the traffic light system announced last month is set to replace it. It's been criticised as complicated, but offers a fresh start to how we approach restrictions.

Meanwhile, work continues on planning for changes to the international border and what that looks like.

So let's forget all about what's gone before, and look squarely at what regional restrictions and travel - including to and from overseas - may look like in future.

Below, we'll explore an optimistic example of what New Zealand's restrictions might be expected to look like in March 2022, about two years on from when Covid-19 first arrived in New Zealand.

New Zealand's DHBs have all surpassed 90 percent double vaccinated, and the country has ditched alert levels completely, moving to the Covid-19 Protection Framework - also known as the traffic light system.

This system has three levels - Green, Orange (or Amber, depending on who you talk to) and Red. Kermit may sing of the difficulties of being green, but it's much easier than being in red, or in lockdown. 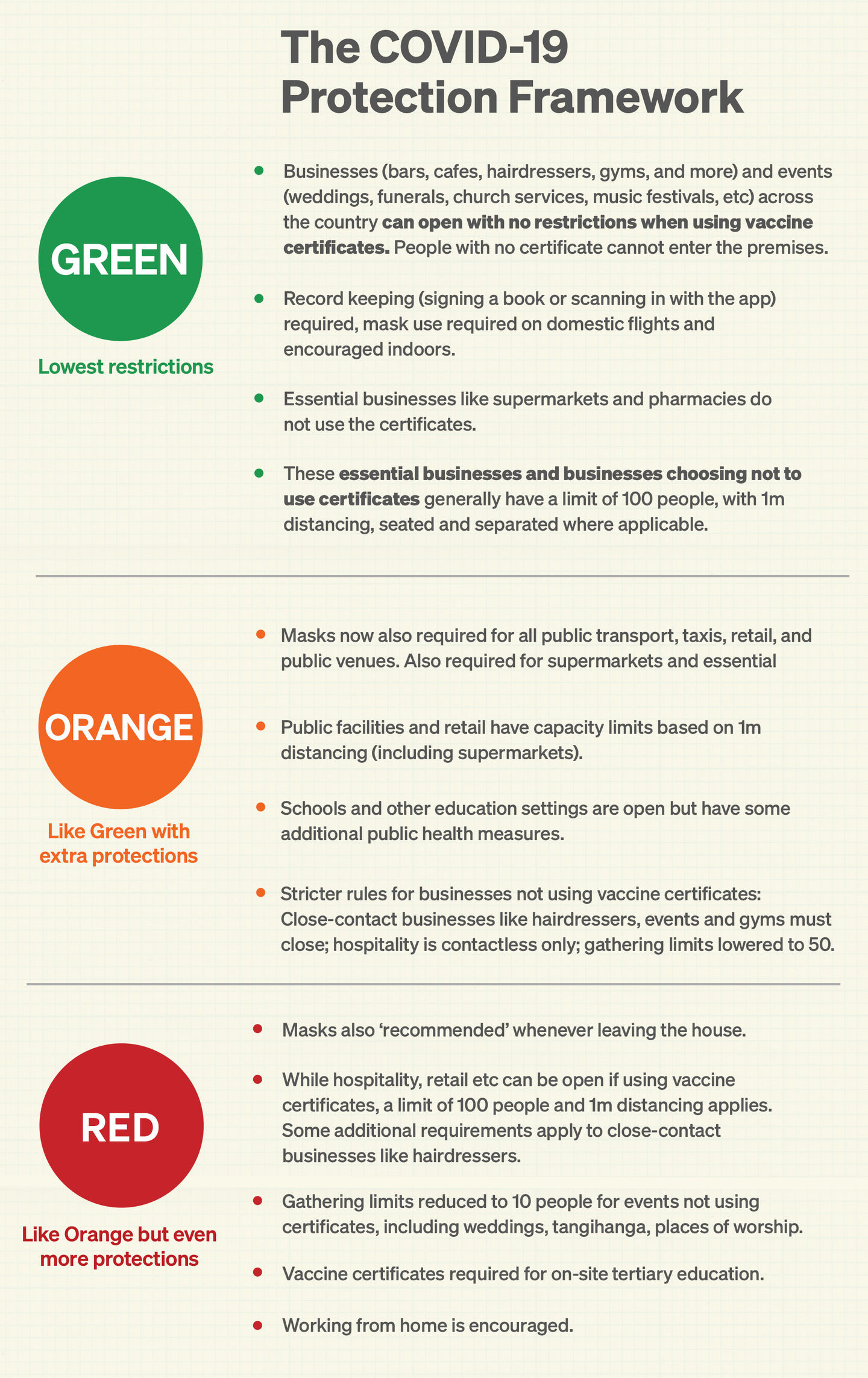 Auckland was the first to move, having reached 90 percent double vaccinated across its three DHBs in early December, the region moved to Red.

The rest of New Zealand took a while longer. The South Island's DHBs reached the 90 percent target and moved to Orange just before the new year. Some travel restrictions between the South and North Islands, or out of Auckland - rapid antigen testing before travelling and no symptoms - were brought in.

A big effort was made to get the final holdout regions in the North Island - particularly in remote and rural areas, and those with big Māori populations - across the line, and it was announced that the rest of the North Island would move into orange in mid-February, and the Auckland regional border would finally come down.

Meanwhile, with few cases appearing, most of the South Island moved to Green in late February. Cases in Christchurch continued to appear, and the city (but not all of Canterbury) remained in orange for a while longer before the high vaccine rate's success at slowing the spread of the virus encouraged the government to move it to Green.

In March, the long tail of Delta continues to keep Auckland in Red but daily case numbers are slowing. Some of the city where the virus had been circulating rapidly have been subjected to occasional additional lockdown measures, with people encouraged not to leave their home.

Parts of Northland and Gisborne - some of the slower areas to vaccinate and where the virus began spreading from Auckland - have also been in red, with occasional bouts of lockdown.

The South Island is now in Green. Areas of the North Island have also moved to Green, but Orange is still being used in some areas where the virus has been circulating.

Despite the greater freedoms offered by the new traffic light system and changes at the border, the virus has continued to find its way across parts of the country.

As Covid-19 modeller Shaun Hendy warned in November, the move to the traffic light system signals an acceptance of some Covid-19 circulating in the community.

While cases peaked around 300 per day in late November, it has taken some time to truly get the outbreak under control and while cases have not spiralled out of control, they have continued to spread.

Hospital beds occupied also peaked around the same time but hospitals have not been overwhelmed thanks to lockdown precautions.

Some deaths have been reported.

After a couple weeks with all of New Zealand having moved to the traffic light system, the government brought in changes to the border.

All travellers must make a declaration - digital or on paper - of their vaccine and testing information.

However, fully vaccinated travellers from low-risk countries can now enter New Zealand without needing to isolate at all if they return a negative test.

Travellers who are not vaccinated, or coming from high-risk countries, must still spend 14 days in MIQ.

After the success (fingers crossed) of the at-home self isolation trial which ended in December, the government announced that vaccinated travellers from medium-risk countries could isolate at home.

People doing this must answer a randomly timed video call three times a day which detects location via GPS, and may only leave their room to collect contactless food and deliveries, for testing, or to get some fresh air if they have a backyard that no one else accesses.

The room must not have a shared ventilation and be occupied only by the affected travelling party - this means no contact with your family unless they travelled with you.

The government has also signalled it plans to soon allow all fully vaccinated travellers who return a negative test to skip isolation, regardless of the country they are coming from. There are also plans in the works to allow tourism from other countries.

The above is based on modelling and expectations, along with decisions already announced by the government, but there's always an element of the unknown: the "tricky" virus, new technologies, and unexpected situations.

In a statement, a Department of Prime Minister and Cabinet spokesperson said:

The detail of how the Covid-19 Protection Framework will be implemented, and guidance for different sectors, is still being worked on and further information will be provided once Cabinet decisions are made.

In relation to lockdowns, the Covid-19 Protection Framework will reduce our reliance on them as the main measure to stop the virus spreading. As has been indicated, there may be a need for highly targeted, localised lockdowns, and potentially wider lockdowns, like those which we see currently under the Alert Level system, if the public health response requires it.