Children did more baking, cooking, and outdoor exercise during last year's national lockdown than prior, a major survey shows. 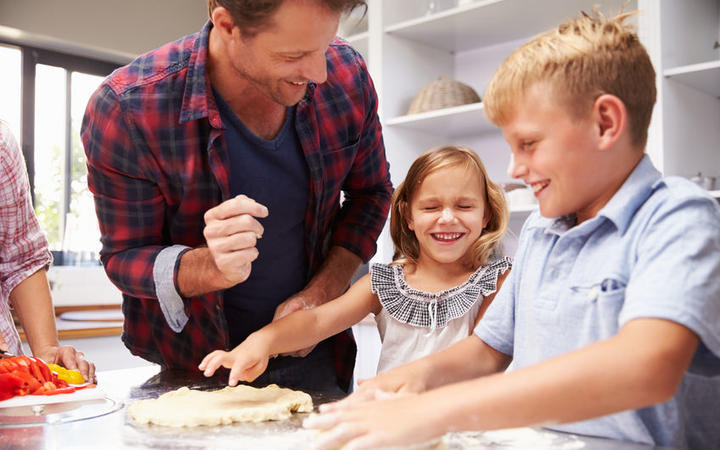 Ten to 11 year olds were doing 23 percent more baking and cooking during last year's lockdown than when they were eight years old. (File image) Photo: stockbroker/123RF

The University of Auckland's Growing Up in New Zealand study also found 10 and 11 year olds spent a lot more time in front of a screen than they did when they were eight.

The research has been tracking the lives of more than 5000 children born in 2009-10 whose mothers were living in the Auckland, Counties Manukau or Waikato DHB regions.

The report was based on online survey responses from nearly 2500 of the study participants in May last year.

It found most of the children were enjoying school less than when they were surveyed at age eight, but 79 percent reported a good time with family during lockdown.

"About a quarter or so were struggling to engage in education that was being delivered online," professor Morton said.

"We also saw there were some children who were perhaps having impacts on their wellbeing, particularly their mental wellbeing, and we were really concerned about that, especially given this was quite early in the Covid pandemic."

The survey also showed some children did not have access to online learning or to spaces where they could do their school work, she said.

Those children might be badly disadvantaged by successive lockdowns, she said.

"Children who were already struggling at eight [years old] before the pandemic hit potentially had that exacerbated by the pandemic striking," she said.

"In the early phases, the direct impact of that on their learning wasn't as obvious but we are quite deeply concerned now that this has gone on for a considerable number of months, even a year or more now.

"We are worried about the impact this is likely to have on the gaps we were already seeing at eight [years old], when the children are 12 and about to enter secondary education that actually these things may have created greater gaps."

The Growing up in New Zealand study found most 10 and 11 year olds were helping in the kitchen at home at least once a week during last year's national lockdown.

In fact, they were doing 23 percent more baking and cooking than when they were eight years old.

One of the study participants, Emily Rope, told RNZ that lockdowns had been an opportunity to refine the gnocchi recipes she made with her father and learn some new ones.

"We started pizza during lockdown, and then baking-wise, I like cooking chocolate chip cookies, chocolate cakes, cheese scones for everyone when they get out of meetings," she said.

Emily said she spent a lot more time on technology than usual because schoolwork was online.

She estimated that she did about as much exercise in lockdown as she did in normal times.

"We don't do as much swimming training, but I've been doing more runs and stuff like that," she said.

Another of the study's children, Frida Pilditch, said she was making pancakes during lockdown.

"I can flip them with a spatula but not yet in the air. Because I don't want my dog eating the pancakes I will definitely drop," she said.

Frida said her cooking had improved during lockdown and her next goal was to make sushi.

She said it was a lot harder to learn online than in class at school and she was worried that the Auckland lockdown was affecting her education.

"At the start it was like 'oh yes, get out of school, I'll just get to play video games all day'. But it's coming to the bit where I feel like I haven't done enough work and if I go back I'm going to be really behind, but I think a lot of people in my class are feeling like that," she said.

Study participant Liam Fraser said he was spending a lot more time in front of screens during lockdown.

"In lockdown, I think I do [use] a lot more electronics than I usually do, because I'm not doing any sport and we definitely watch more movies.

"During the day, I'm on a screen doing my schoolwork so I'm basically on a screen most of the day and that's not very good."

But Liam said he also got outside and played with his siblings, something the survey found 79 percent of survey participants did at least several times a week.

"We go play football quite a lot and I do running and cricket and stuff like that," he said.