It is Halloween on Sunday but traditional trick or treating will be off the cards for thousands of children this year. 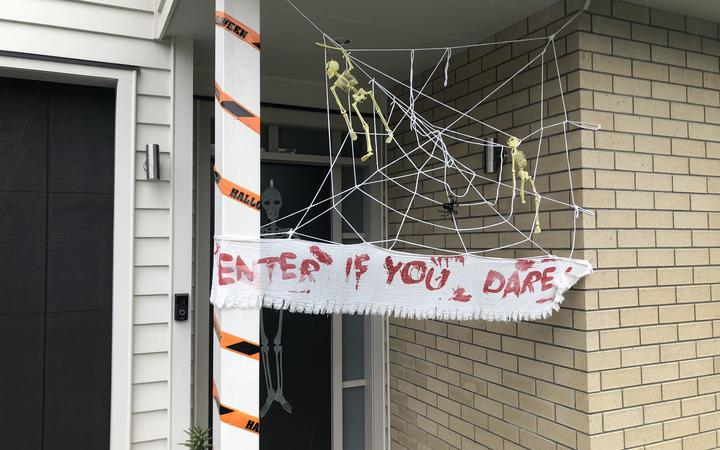 Despite the restrictions, many families in alert level 3 are determined to celebrate.

Auckland resident Dee Crooks is looking forward to this weekend's festivities with her two children and has decorations throughout her house including skeletons, pumpkins and a giant spider on the letterbox.

Crooks said while her family could not mark the occasion like they normally do, they will make the most of it.

"Obviously it's going to be a bit different, but we're going to have a lolly hunt in the backyard, and we've still decorated the house but not quite to the same extent," she said.

Crooks said while it was disappointing to be in lockdown, there would still be a fair share of treats for her children.

"We've explained to them why we can't trick or treat this year, but it's going to be about making sure we can have fun in the backyard."

Crooks said costumes are a huge part of the day, her daughter is dressing up as Wednesday from the Addams family, and her son will be a skeleton.

Dignan Street in Auckland's Point Chevalier usually welcomes hundreds of trick or treaters - but this year things are different.

Despite this, resident Gina von Sturmer said her family were already into the spooky spirit.

Their home is covered in decorations including coffins, spider webs and skeletons. 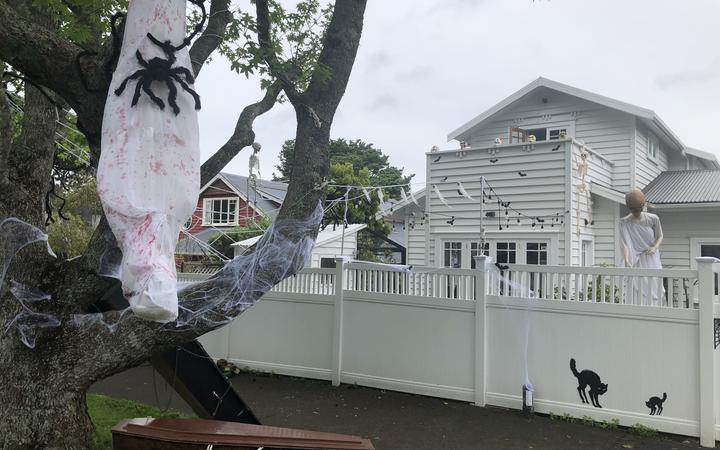 With three kids under the age of six, von Sturmer said Halloween was a great time for her family and others in the neighbourhood.

"I love it. It's a lot of fun and I like the expressions and the reactions of people walking past, and that I think brings the most joy, plus all the kids getting really excited," she said.

Their home is one of 15 in the suburb competing for best decorated house but she admits Halloween won't be the same as previous years.

"It's a lot harder because we're not doing trick or treating this year, but we're still getting into the spirit of it with decorating.

"It's great that people can go out on a walk with their bubbles and keep safe and just enjoy the decorations," she said.

She said while outfits would normally fly off the shelves for 31 October, lockdown has put the brakes on.

"It has been a lot quieter this year but we are open for contactless hires, so we have had a few enquires which is really cool.

"People are still keen to dress up for their little bubble parties because Halloween is a really fun time of year, it's a really cool time to be really creative for the spooky season," she said.

New Zealanders are also going online for festive fun and Trade Me said Kiwis are still searching for Halloween despite restrictions.

Spokesperson Millie Silvester said New Zealanders were turning to the site for an array of costumes and scary decorations in the lead up to 31 October.

Silvester said a Korean Netflix show had provided a huge amount of costume inspiration, with searches for Squid Game costumes skyrocketing since its release mid-September.

Making the top ten for the first time ever were dinosaur and inflatable costumes.

"We reckon some Kiwis are trying to combine social distancing guidelines with Halloween festivities," she said.

Silvester said different areas around the country are pursuing their own favourite costume ideas.

Aucklanders would be dressing up as wolves and superheroes according to Trade Me search data, while Wellingtonians planned to celebrate our national heroes, with nurses and doctors topping the costume charts.

Last year's overall top costume search, Harley Quinn, will be making a comeback with Cantabrians along with Darth Vader. Further down south in Otago, you'll find a few more inflatable aliens and superheroes.