More than 2000 Great Walk bookings have been cancelled in recent months as Covid continues to take a toll. 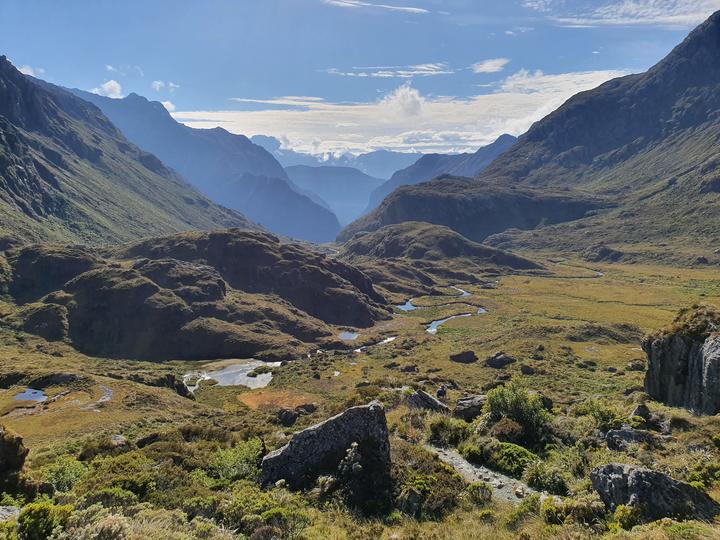 The Routeburn Track. Photo: RNZ/Sally Round

In Fiordland, some Milford Track operators are describing one of the quietest starts to the seasons they've experienced.

But while this season will be a sore reminder of untramped tracks for some, the cancellations bring silver linings for others.

The Milford Track faced unprecedented demand this year with all spots for its six month season filling up in just 15 minutes one morning in June.

But between lockdowns in Auckland and Waikato, the trans-Tasman bubble remaining on pause and travel uncertainty, a steady stream of cancellations have been coming through across the Great Walks.

Fiordland Outdoors Co. offers water taxis to the Milford and Kepler tracks and is a one stop shop for booking track transport in Fiordland.

Its owner and director Christine Wallace said she has never seen a Milford Track opening like the one this week.

"I've never known on the opening day - the 26th of October - to have 24 empty spaces on the Milford Track so I don't think it will ever happen again."

The Kepler and Routeburn tracks had also been suffering, Wallace said they were considering reducing their Kepler water taxi to an on-demand service.

Aucklanders had been holding out hope the restrictions would end in time to lace up their tramping boots, she said.

"There has been steady cancellations, but it's really ramped up in the last 10 days. I think Aucklanders were really hoping something would change, they held their hut tickets.

"But it's been this week with the cancellation of the flights by Air New Zealand that they've sort of accepted it."

She has consoled crying Aucklanders who were forced to give up their spot on a Great Walk by the restrictions and uncertainty.

"For every Aucklander that's devastated they can't go, we're getting two South Islanders or outside of Auckland that are just ecstatic that they've picked up hut tickets last minute."

Aucklander, Richard Wagener, his wife and their four kids were booked to do the Milford Track in December

He told RNZ he was disappointed to be faced with cancelling the hard won booking.

"Very difficult. The previous year we missed out, this time we were lucky. But yeah, the tickets were gone in about five to six minutes."

He has asked DOC to consider rolling over his bookings to the same dates next year.

But the department has since confirmed it was unable to do that and offered a 100 percent refund instead.

Half of the guests at Te Anau Lakefront Backpackers were usually preparing for a Great Walk.

Its manager Giovanni Ambriz would usually be hosting between 30 and 40 people a night at this time of the year, but that was down to 10 to 20 due to the restrictions.

He was hopeful more bookings would come through as people grabbed spots opening up on the Great Walks.

"That's been good for some people because obviously it got booked out within 15 minutes so I'm sure many people back then got left out. But now a few more could take their places."

He had a group of four excited guests who did just that a few days ago.

"They live in Wānaka so they were happy to go last minute and then they just made their way here and stayed with us the night before they were to go on the track."

The Department of Conservation has recorded more than 2400 cancellations between the nationwide lockdown in August and this week.

Its acting heritage and visitors director Tim Bamford said the pandemic was playing a role in the cancellations, but so was weather closures and injuries.

DOC had never seen so much demand for New Zealanders to tramp a Great Walk like they had in the past two years, he said.

"These are bucket list experiences and it's really tough if you have to cancel them but on the flip side is it provides people an opportunity to keep an eye on the website and get onto one of these iconic spots."

DOC is preparing for a busy Great Walks season, asking people to scan in where possible, keep your distance on tracks, and follow the rules.