People spoken to around Ōtautahi last night expressed a mixture of confusion and anger at news Covid had re-appeared in their community for the first time in almost a year. 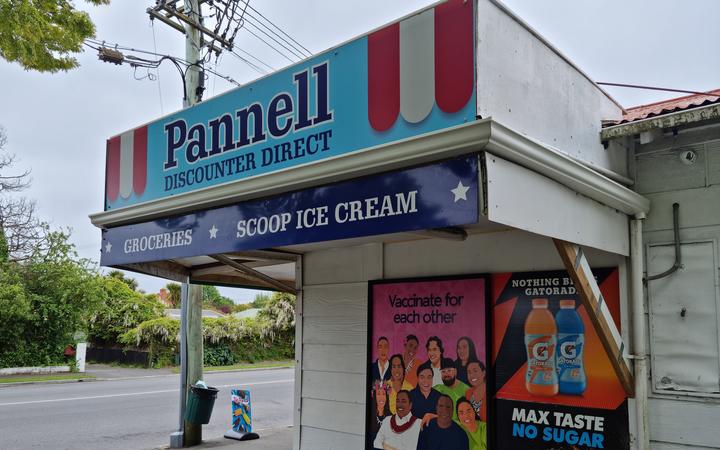 Pannell Dairy in Wainoni, Christchurch was named as a location of interest. Photo: RNZ / Conan Young

On Thursday Prime Minister Jacinda Ardern announced the virus was contained and there was no need for the city to move to level 3.

Part of the rationale for the decision was high vaccination rates in Bishopdale, the suburb where the infected couple live.

But one of them had travelled to parts of the city with a much lower uptake of the vaccine.

Dave Brown owned the Pannell dairy in Wainoni in the city's east, which as of Thursday night was one of 13 locations of interest spread right across the city.

He found out the person had visited his store through the media and when RNZ spoke to him, had yet to hear from health authorities.

"Well it would it be nice to know what we have to do from here on, whether we can continue trading or we shut down."

While his staff were all double vaccinated, one of them was immune compromised.

He was angry somebody had been allowed to travel to Auckland and back without a vaccination.

"First off I'm bloody peed off with the government as is just about everyone else that's been in the shop, there's a lot of angry people in Christchurch."

Latest figures showed in Wainoni just 77 percent had received a first dose of the vaccine and only 55 percent their second one.

On the same day, the infected person also visited a dairy in North Linwood, another area with low uptake.

A stark reminder of just how vulnerable this part of Christchurch was to an outbreak was provided by a customer of the Pannell dairy spoken to by RNZ, Cherie Shipton.

The courier driver said news a positive case had visited the same place as her, made her nervous.

"[It's] motivating me to go get the vaccinations, so might look into that now. Yeah, [I'm] just not even 100 percent sure if I should get it [the vaccine]. So I'm 50-50. But yeah, I want to go back into the bars and restaurants so I probably have to get it."

Back on the other side of town in Bishopdale, where the Covid-positive couple live, business was brisk at a pharmacy offering the Covid jab, right next door to another location of interest, the Bishopdale New World.

Unlike Wainoni and Linwood, rates here were much higher, at 92 percent for first doses and 71 for second ones.

Deb Cartwright had just had her second jab which she decided to bring forward, after hearing the news there were cases in her community, and had this message for the infected couple.

"I hope they remembered all the places they've been seeing as they haven't been scanning in. And once they're better, I hope they get vaccinated as well. I mean, apart from cutting the North Island off from the South Island, how do we keep it out. At the end of the day, we've all just got to get our vaccinations and get back to some form of freedom."

While Christchurch remained in level two, the Canterbury DHB was nevertheless upping precautions and stopping most visitors to its hospitals, in order to protect patients from the virus.

Meanwhile Covid continued to creep south, with a worker at Macraes mine in Otago being named by their employer, Oceana Gold, as a close contact of the couple late on Thursday.