The Covid-free wave has crashed in Christchurch, with two new community cases confirmed this morning. 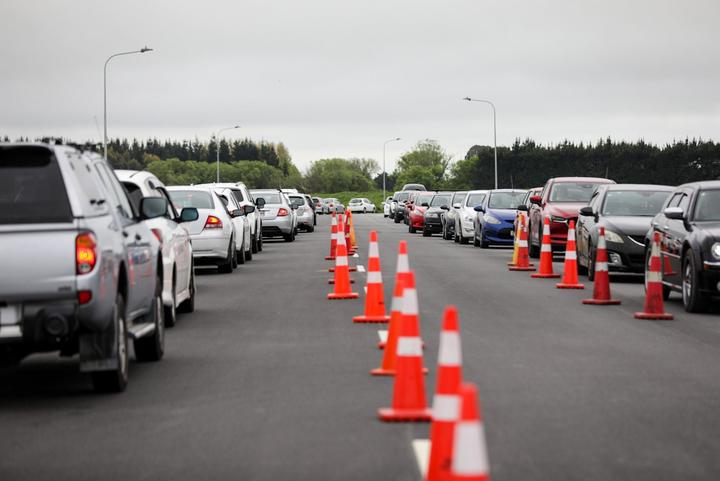 The Orchard Road testing site in Christchurch was busy after a case was announced in the city. Photo: RNZ / Nate McKinnon

But the city has avoided a snap lockdown, despite two community cases visiting several locations of interest.

Both people were unvaccinated, one of them was working for four days during their infectious period - a truck driver who completed deliveries around the city.

One of the cases recently traveled to Auckland to provide childcare, returning a negative test before returning to Christchurch.

The other case is a household contact. Neither were regular users of the Covid app.

Covid-19 Minister Chris Hipkins said this morning he wasn't ruling out a snap lockdown for the city, but then this afternoon said this:

"The government's agreed to hold Christchurch at its current alert level setting of alert level two.

"The two individuals concerned have had no major exposure events and close contacts have been identified and are self isolating, with their test results pending."

There were no major exposure events, but several locations of interests: among them a supermarket, petrol station, a couple of dairies, a Burger King.

And yesterday afternoon - while awaiting their test results - Ken's Takeaways in Bishopdale.

Nine close contacts have been identified over three households.

In the Canterbury DHB, 89 percent of the eligible population have had one Pfizer dose and 69 percent are fully vaccinated.

Hipkins said the couple's suburb of Bishopdale has a relatively high vaccination rate.

Locals there today had mixed views about dodging a lockdown with some said they would feel safer under stricter rules, while others said people should follow the protocols under level 2.

The Minister said no lockdown - but Cantabs should take this as a wake up call.

"I do want to send a message to the people of Christchurch: anyone with any Covid-19 like symptoms is encouraged to get a test straightway."

That message has been heard loud and clear - about 300 cars were queued up outside the city's main testing site when RNZ visited.

Those waiting in line for a test said they were nervous.

"I haven't had my third booster jab, at least I'm double vaccinated, but it's not as effective."

"It was surprising, but everyone knew that Covid was gonna come down, we're not separated from Auckland like in Tasmania, it was always going to happen."

Both cases have been moved to a quarantine facility.

So for now, it's business as usual for Christchurch, but a keen eye will be kept on the case numbers to confirm whether the city has indeed dodged a bullet.