As Covid-19 continues to spread, the New Zealand public is being reminded to watch its racist attitude towards any particular community during the Delta outbreak. 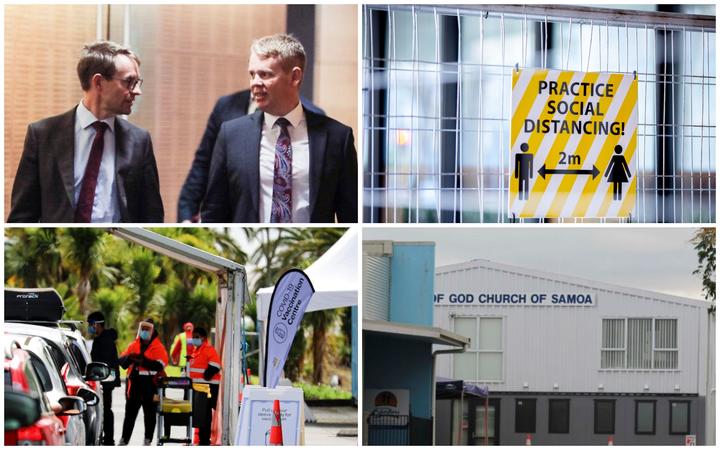 At the 1pm briefing he said: I'm asking everyone in the country to be kind. The virus is the problem, not people, people are the solution. Be part of the solution."

More than 100 of the cases can be traced back to the Samoan Assembly of God Church in Māngere sub-cluster.

He said the Pacific community had been incredibly responsive. It has the highest testing rate in the country to date, with 981 tests per 1000 people compared to 479 for Pākehā.

"God bless them" - That's the response from a leader at church, following abusive messages sent on Facebook.

The government is looking at the potential impact of having parts of the country under level 4 lockdown while restrictions are eased in other areas.

Covid-19 Response Minister Chris Hipkins said the alert level framework was expected to remain largely the same, with a few tweaks such as greater mask-wearing and compulsory record keeping.

Five Aucklanders who turned up for their Covid-19 vaccine last month may have got a dose of saline - a salt water solution - but the Ministry of Health still has not told them.

Bloomfield said it was always the intention to contact those people.

At the select committee later, Hipkins acknowledged the delay in making the information public was "regrettable".

The ministry is now contacting the 732 people who were vaccinated on the same day at the Highbrook centre on 12 July.

Hipkins said there had been at least one other incident where people had to be called back for vaccine.

People will be able to return from Australia to New Zealand in September with the resumption of red flights from several cities in Australia.

The 'red' flights will require travellers to book their 14-day stay in managed isolation, have a negative pre-departure test, and the normal rules around paying for their stay will apply.

MIQ vouchers and flights will be available for travel on a limited number of dates in September from a select number of locations.

The number of MIQ rooms available for regular New Zealanders desperate to enter the country has been falling since earlier this year, as hundreds are empty at any one time due to a "cohorting" system.

Between 350 and 500 rooms each fortnight are set aside for large groups such as sports teams, seasonal and construction workers, and refugees.

Hipkins said there was capacity at the Jet Park quarantine facility but another facility - two hotels near Auckland Airport - was also being stood up in case additional capacity was needed. It would be ready in the next 48 hours.

He said the government was not rereleasing further MIQ vouchers at the moment because it wanted to avoid overcommitting facilities when there was extra internal pressure from the outbreak.

IRD to write off some penalties

Inland Revenue is assuring people they will not be penalised if they cannot pay their tax on time during the current alert levels.

A spokesperson said the department was currently receiving thousands of calls every hour and many cannot be answered.

They said Inland Revenue was urging people to make contact online and any penalties and interest for late filing and payments would be written off.

Vaccine bookings are open to everyone over the age of 30 from today.

There are 62 new cases of Covid-19 in the community today, taking the total to 210 in the current outbreak.

There are 20,383 contacts in the Auckland outbreak; 12,717 of those have been formally contacted, and 62 percent have returned a test result.

There will be more than 1200 contact tracers in call centres around the country over the next few days.

A record 80,000 New Zealanders got a vaccine yesterday, while testing numbers also reached a record high - nearly 50,000 across the country.

About 2,932,455 doses have been delivered so far, and more than a million of those in Auckland.

The two biggest sub-clusters are the Samoan Assembly of God Church in Māngere, and the Birkdale Social Network cluster associated with case A.

There is a 14-case cluster associated with Massey households and workplaces, and the rest have less than 10 cases so he will not go into further detail.

There are six sub-clusters in total.

More than 6500 court hearings have been postponed around the country due to alert level 4 restrictions.

Any hearings that impacted the liberty of a person were going ahead, as well as hearings that protected the at-risk or vulnerable, and other priority hearings.

Many of these were taking place via video calling.

All jury trials have been pushed back - 57 in the District Court and two in the High Court.