Five Aucklanders who turned up for their Covid-19 vaccine last month may have got a dose of saline solution instead but the Ministry of Health still has not told them. 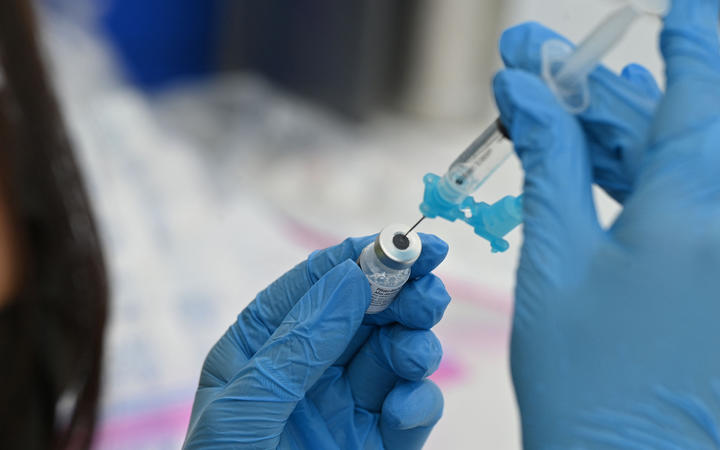 The ministry still has not been able say what will be done to ensure those affected will receive two full Pfizer doses.

RNZ was alerted because of concerns there could be vulnerable people in the community who wrongly believe they are fully vaccinated.

The mistake happened at the Highbrook vaccination centre in Auckland and RNZ understands the problem was discovered at the end of the day, when staff realised there was an extra vaccine vial left over.

This has been confirmed by the Ministry of Health, which said "the vaccine stock didn't match the number of doses administered".

Those groups include border workers, high-risk frontline health workers, over 65s and those with health conditions that make them more vulnerable to Covid-19.

Some would have been getting their first dose, others their second.

National director for the Covid-19 vaccination and immunisation programme Jo Gibbs said five doses were unaccounted for at the end of the day.

"It could have been due to some vaccinators getting more than the regular number of doses out of some vials and forgetting to record this. An alternative that we can't rule out is the possibility that some people didn't receive the correct vaccine dose," she said.

RNZ understands the vaccination centre could not determine who the five people affected were.

Typically, a vial of the Pfizer vaccine contains multiple doses which is then diluted using saline solution once it has thawed on site.

RNZ has been told it is possible that those people could have received very little vaccine or just saline solution instead.

It is thought the likely scenario is that an already used vial had saline solution added.

Gibbs said the wrong dosage would not have harmed the patient and that "these types of situations occur from time to time".

A full review has since been undertaken, she said.

"We are working through that report to determine our next steps, including discussing with other jurisdictions their response when similar events have occurred," she said.

Gibbs said the ministry had a "principle of open communication with any patients involved".

However, when asked if that has means those patients potentially affected have been informed, the ministry confirmed they are yet to be contacted.

"We are still gathering the information needed to fully understand the situation and provide any advice or support that might be needed.

"We will be communicating with people who may have been affected when that work is complete," she said.

The Code of Health and Disability Services Consumers' Rights gives all consumers the right of open communication with a provider.

"A consumer should be informed about any adverse event, ie, when the consumer has suffered any unintended harm while receiving health care or disability services.

"An error that affected the consumer's care but does not appear to have caused harm may also need to be disclosed to the consumer. Notification of an error may be relevant to future care decisions."

A disclosure should include acknowledgement of the incident, an explanation of what happened, how it happened, why it happened and, where appropriate, what actions have been taken to prevent it happening again, it said.

A similar instance has occurred in Australia at Rockhampton Hospital in Queensland last month.

It resulted in six people receiving an ultra-low dose of the vaccine and may not have been vaccinated.

All 159 people who received the vaccine that day were contacted within a week and were offered a repeat dose.